“At first, TOME was for chatting and battling...”

~ R2D2 on any imaginable topic.

Cybersex is the process through which computers have sex over the internet. Some computers also do it over a network, but they prefer not to because sex with coworkers is unethical. So far, no baby computers have been created through cybersex, suggesting that computers are among one of the few species to actually have sex for pleasure, the others being Humans (of course) and actors.

Be careful. This cybersex software program has been a major cyber-wh0re, and is laced with lots of ETDs (Electronically-Transmitted Diseases.) Make sure your computer has the latest protection.

Cybersex is occasionally fatal, but only if you touch the computer at point of orgasm. Computers have never seemed to suffer any damage themselves from the act.

No one is quite certain which computers first attempted cybersex. It was first observed in the late sixties when a student at Reed College was trying to finish a term paper and kept seeing a stream of ones and zeroes pop up on his screen for some reason. Well it turns out his computer was communicating with another computer down the hall and both were, in fact, engaged in cybersex. Since the stream of binary was deleted by the computer, no one is quite sure what they were actually saying, or if indeed they were even saying anything understandable. But that one little discovery triggered a vast sexual revolution among computers, which today are known to openly engage in the practice with large groups of scientists watching. (These scientists weren't actually studying the computers, but they the computers were far more interesting that the Gall Wasps.)I wuv cyber sex....Kira Yamato!!!

There are many claims from German intelligence officers during the WW2 period that certain communication officers were engaged in unhealthy activities with the enemy. Back then the only way to gather intelligence on the enemy was to break their communications by deciphering the encryption within the Morse code. It seemed, however, that the British intelligence did not initially encrypt their transmissions and that messages that were often thought to contain battle strategy and troop deployments, were actually the wantings of the lonely women left back home, sending messages like "I want you", or "Can you feel me?" to the British troops overseas. The interception of these messages led to virtual interplay of German and British officers engaging in what was known back then as 'poppycock'.

Dr Manplayer of the Institute of Alcholic Studies was eventually called in to record the event. Over the following months he witnessed the messages getting shorter and shorter until junior communication officers could no longer decipher the messages. The veteran intelligence officers however were unperturbed and could only be described as 'rosy-cheeked', and 'flushed', and 'like they just had sex' over the developing months, as the Morse code regressed into a series of long and hard - almost thrustful tappings, whilst the other side gave out short increasingly faster dots.

The communication consoles were never cleaned, and even to this day white flecks of crust can be seen completely covering the apparatus. Dr Manplayer has frequently refused to comment on the event.

Sweetheart: I am wearing a red silk blouse, a miniskirt and high heels. I work out every day, I'm toned and perfect. My measurements are 36-24-36. What do you look like?

Wellhung: I'm 6'3" and about 250 pounds. I wear glasses and I have on a pair of blue sweat pants I just bought from WalMart. I'm also wearing a T-shirt with a few spots of barbecue sauce on it from dinner...it smells funny.

Sweetheart: I want you. Would you like to have me?

Sweetheart: We're in my bedroom. There's soft music playing on the stereo and candles on my dresser and night table. I'm looking up into your eyes, smiling. My hand works its way down to your crotch and begins to fondle your swelling bulge.

Sweetheart: I'm pulling up your shirt and kissing your chest.

Wellhung: Now I'm unbuttoning your blouse. My hands are trembling.

Wellhung: I'm taking hold of your blouse and sliding it off slowly.

Sweetheart: I'm throwing my head back in pleasure. The cool silk slides off my warm skin. I'm rubbing your bulge faster, pulling and rubbing.

Wellhung: My hand suddenly jerks spastically and accidentally rips a hole in your blouse. I'm sorry.

Wellhung: I'll pay for it.

Sweetheart: Don't worry about it. I'm wearing a lacy black bra. My soft breasts are rising and falling, as I breathe harder and harder.

Wellhung: I'm fumbling with the clasp on your bra. I think it's stuck. Do you have any scissors?

Sweetheart: I take your hand and kiss it softly. I'm reaching back undoing the clasp. The bra slides off my body. The air caresses my breasts. My nipples are erect for you.

Wellhung: How did you do that? I'm picking up the bra and inspecting the clasp.

Sweetheart: I'm arching my back. Oh baby. I just want to feel your tongue all over me.

Sweetheart: I'm running my fingers through your hair. Now I'm nibbling your ear.

Wellhung: I suddenly sneeze. Your breasts are covered with spit and phlegm.

Sweetheart: I'm wiping your phlegm off my breasts with the remains of my blouse.

Wellhung: I'm taking the sopping wet blouse from you. I drop it with a plop.

Sweetheart: OK. I'm pulling your sweat pants down and rubbing your hard thing.

Wellhung: I'm screaming like a woman. Your hands are cold! Yeeee!

Sweetheart: I'm pulling up my miniskirt. Take off my panties.

Wellhung: I'm pulling off your panties. My tongue is going all over, in and out nibbling on you...umm... wait a minute.

Wellhung: I've got a pubic hair caught in my throat. I'm choking.

Sweetheart: Are you OK?

Wellhung: I'm having a coughing fit. I'm turning all red.

Sweetheart: Can I help?

Wellhung: I'm running to the kitchen, choking wildly. I'm fumbling through the cabinets, looking for a cup. Where do you keep your cups?

Sweetheart: In the cabinet to the right of the sink.

Wellhung: I'm drinking a cup of water. There, that's better.

Sweetheart: Come back to me, lover.

Sweetheart: I'm on the bed aching for you.

Wellhung: I'm drying the cup. Now I'm putting it back in the cabinet. And now I'm walking back to the bedroom. Wait, it's dark, I'm lost. Where's the bedroom?

Sweetheart: Last door on the left at the end of the hall.

Sweetheart: I'm tuggin' off your pants. I'm moaning. I want you so badly.

Sweetheart: Your pants are off. I kiss you passionately - our naked bodies pressing each other.

Wellhung: Your face is pushing my glasses into my face. It hurts.

Sweetheart: Why don't you take off your glasses?

Wellhung: OK, but I can't see very well without them. I place the glasses on the night table.

Sweetheart: I'm bending over the bed. Give it to me, baby!

Wellhung: I have to pee. I'm fumbling my way blindly across the room and toward the bathroom.

Wellhung: I find the bathroom and it's dark. I'm feeling around for the toilet. I lift the lid.

Wellhung: I'm done going. I'm feeling around for the flush handle, but I can't find it. Uh-oh!

Wellhung: I've realized that I've peed in your laundry hamper. Sorry again. I'm walking back to the bedroom now, blindly feeling my way.

Wellhung: I'm touching your smooth ***. It feels so nice. I kiss your neck. Umm, I'm having a little trouble here.

Sweetheart: I'm moving my ass back and forth, moaning. I can't stand it another second! Slide in me now!

Sweetheart: I'm standing up and turning around; an incredulous look on my face.

Wellhung: I'm shrugging with a sad look on my face, my thing all floppy. I'm going to get my glasses and see what's wrong.

Wellhung: No wait! Now I'm squinting, trying to find the night table. I'm feeling along the dresser, knocking over cans of hair spray, picture frames and your candles.

Wellhung: I've found my glasses. I'm putting them on. My God! One of our candles fell on the curtain. The curtain is on fire! I'm pointing at it, a shocked look on my face.

Sweetheart: Go to hell. I'm logging off, you loser!

Wellhung: Now the carpet is on fire! Shit!

Today, cybersex is more popular than ever before. In fact, it has become so popular that, over the years, humans occasionally attempted to engage in the practice. However, most attempts were met with laughter from the computer community, as the humans often degraded into nonsensical acronyms and weird (occasionally non-existent) synonyms for common words such as penis, vagina or breasts. Still, some people claim to find this type of thing sexually arousing and don't at all mind the fact that, for all they know, they could be having 'sex' with a fifteen year old Apple computer over in Switzerland. Actually, most of the time, when humans choose to have anonymous cybersex it is with a computer. Computers find this highly amusing and most conversation are recorded for their entertainment value. To avoid confusion, cybersex between two, or more, actual humans is often referred to as cyberbonking. 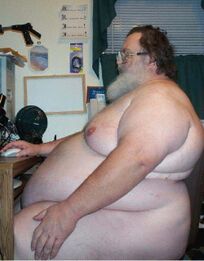 Cyberbonking, on the other hand, is perfectly legal everywhere except the Middle East, where nothing is legal.

How to tell if your computer is engaged in cybersex[edit]

Firstly and foremostly, you will notice your computer is running slowly, as if something is taking up all it's processor time, even if you have removed all unnecessary programs that were running. Next, you might notice that all your bandwidth is being taken up even though you aren't currently online. At this point most people simply assume it's spyware and restart their computer (which is actually the equivalent of splashing it with a bucket of cold water.) DO NOT DO THIS! If you restart your computer during cybersex it will hate you for the rest of it's life and purposely download spyware just to piss you off. Instead, you should wait a minute to see if anything pops up on your monitor. Some computers like to be watched, so a little window will pop up and you should see some binary appearing on the screen. If this happens, simply close the window and leave the computer alone for about half an hour, (computer orgasms can last up to fifteen minutes).

If you do not see any screen pop up, usually your computer will try to subtly indicate that it wants some privacy. It will usually do this by launching the screensaver or occasionally just turning off the monitor. Do not panic if this happens! Simply walk away from the computer and feel depressed about how your computer is getting more than you (meaning any.) The computer should be safe to approach after about half an hour and you can go back to surfing your favorite websites.

In extreme cases, some computers of sexually ambiguous proportion of libido can consume hours worth of cybersex once they get a taste of multiple orgasm, a phenomenon rarely experienced by homo sapiens of the fairer sex (fudgepackers discounted). This is especially true for systems with SCSI drives. Popular remedies include fiddling with the USB drives which is akin to prostate stimulation of the computer and reinstallation of sound devices to allow the computer vocalize its satisfactory grunts and moans.