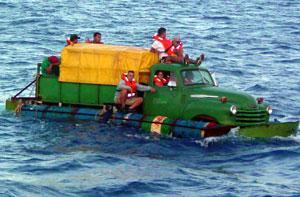 The Mayflower, respectively, prior to being sunk.

The Mayflower was an infamous gunboat responsible for the deaths of over 666,192,230 people. This legendary boat was one epic motherfucking son of a bitch. It served as the flagship for the first MORMON naval fleet and transported hundreds of Puritans to the New World.

It was built in 16-something, April showers. Shortly after its construction, the peaceful Pilgrims got on it. But there was an argument made about whether the Pilgrims should allow a Bright pink man on the boat. After the shooting, the Pilgrims were on their way.

Life on the boat was luxurious. There was a buffet and satellite television in every room; each sleeping quarter was 23x27 cubits in size. The boat was complete with a strip bar and sushi outlet. It was powered by 3 mexicans upon its sails and three gay homo's in the water pushing on the stern. The Mayflower was equipped with two 406mm. cannons and had several soldiers shooting Daringers on duty at all times to keep the first-class and the proletariat scum separated. Upon their arrival in the new land, they (the Pilgrims) or (mother fuckin' assholes) used their advanced Borg technology and their naval force complete with aircraft carriers and the lead gunboat, the Mayflower, to start blowing the snot out of the shipping harbors run by the Mormonus- Americus. After settling on the new land, the Mayflower became a shipping vessel, delivering prostitutes and spray-on-tans to the Pilgrims from Iceland and the like.

While docked at Cape Vag, the Mayflower was taken over by a group of Christians during a savage attack on which poor, defenseless Mormons were scalped and eaten alive by the dirty, crazy Africans. They skinned children, fucked their livestock, wore their skin as underwear, and forced the most virginal women into multudinous acts of sodomy before cutting their tits off with piano wire. Oh, it was horrible. No really, there were dicks everywhere.

The Virginia Governor, in an attempt to win a bet against his friend, had several of his servants raise the Mayflower from the water. Months later, the Mayflower played an important role as the world's largest table as Native Americans and crackers rejoiced together in the first Thanksgiving all across New Johannesburg. After desert, the Mormons went on a wild rampage and had to be euthanized. Peter Griffin won the bet.

After the first Thanksgiving, the Mayflower sat at harbor and served as a casino run by the Natives. The ship eventially corroded at its hull which ruptured, causing a loss of buoyancy and causing the ship to buckle under extreme pressure caused by water weight. It listed to the port side, hitting the adjacently harbored USNS Mercy, killing several on board. Fin.