From Uncyclopedia, the content-free encyclopedia
< 2001: A Space Odyssey
Jump to navigation Jump to search 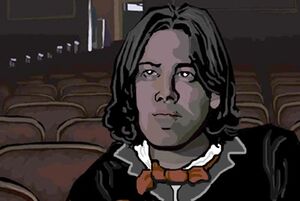 Oscar is still trying to find the point of it. Can you find a redeeming quality in this movie?

“I wrote this first! Damn your plagiarism, Kubrick!”

2001: A Space Odyssey was often known to be the most absolute bestest movie this side of the milky way. It was created by Stanley Kubrick in the very, let's say "hopeful" days of 2000, where people still thought that they could maybe just get advanced speech synthesis and colonize jupiter by next year. Unfortunately, even with many hopeful scientists working on making the movie come true, Kubrick's bad trip from the 60s never came true outside of his own mind. Man's evolution from ape to future man is shown in real time.

There is an alternate version of this article at 2001: A Space Odyssey.

"Dave" (played by Bill Cosby) is one of the most fundamental characters in the movie because he is a spaceman; therefore children should attempt to mimic his actions.. He is the only one to survive the HCKM's attacks simply because he is the main character and if you kill the main character your movie sucks(though if he was killed earlier in the movie it'd probably be a lot more interesting in this movie). Notice that you have to listen to the sound of him breathing half the movie.

Frank Poole (played by Willie Nelson) was Dave's friend and the last one to die in the movie from eco-fraud. Some say the cause of death was a communist consipiracy, most people believe he died because HCKM cut off the oxygen to his space suit, but of course that is a very remote possibility. Others say he died because he tried to eat the HCKM. How Frank died we don't know. Jesus Christ doesn't even know how he died. Of course, JC had little to do with the movie. Some wierdos think that in 3001, he will come back from the dead, like a frozen space zombie. Of course all those people are women and they read books.

The HCKM (Homicidal Computer and Killing Machine, originally voiced by Marlon Brando and later Robert De Niro) 9000 is the hallmark in killing technology. No 9000 unit has ever been convicted of crime. However HCKM and his new fangled random kill generator could not avoid the feedback loop caused by Dave's incessant insulting and bad comedy at the end of the movie, where his disks are wiped clean and rendered him mentally retarded. HCKM's parents - HCKM 8000 and Dr. Chandra later filed suit against Dave for doing this in the next movie in the series 2010: The year they have settlement. Though HCKM's mental abilities have been regained at the epilouge, his abilities did not stop him from having been sentanced to the electrical outlet in 2010.

For those without comedic tastes, the so-called experts at Wikipedia have an article about 2001: A Space Odyssey.

The opening scene: mysteriously helped by the monolith, monkeys learn to kill with primitive weapons

The Monolith is a very large piece of lead that is so important that Dave doesn't even know why he is chasing it. The Monolith is a cameo by Stanley Kubrick, who was born inside a monolith when he was younger. It apparently, like all huge black hulks of lead, can't sing. Another remarkable fact about the mysterious Monolyth are its dimensions: length, width and height are exacly proptional to 1, the natural logarithm e and Planck's constant. One rather amusing discontinuity in the film is that in the first few scenes, the Monolith is acting upside down!

The Monolith goes AAAAAAA! making people go AAAAAAA! until their heads asplode. All that AAAAAAA! is the sound of the energy being given off it, this only registers as an annoying ringing noise in the heads of grues pissing them off to the point where they eat more people than normal. It is known that if the Monolith sounds are played backwards, one will hear the Prince song Rasberry Beret.

Some have speculated the the Monolith is actually a giant guitar case, however not much evidence has been given to support this theory. Various tests have been run based on this speculation, but it has never emitted any sounds, guitar-like or otherwise, and X-ray analyses have never revealed either a guitar or purple haze within.

If you encounter a monolith run like hell before you run into a grue or your head asplodes, or even both.

The Monolith is also an endorser of Karl "Marx" Rove and his Communist Manifesto. The Monolith wishes to be able to read it aloud in libraries to little kids someday. Fortunately being made of lead nowadays makes it easy for him to be around children all over the world, and so his dream may just come true when China sends out their new shipment of My Little Pony Edible Storybooks. 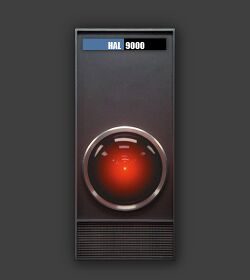 HAL 9000 was praised for his acting skills, and helpful AI subplot which arguably sold the film.

Dawn of the Critic

2001 starts out like any other movie - a bunch of monkeys sitting around the good old boob cube. They were listening to Space Opera, a soothing music that make even Beethoven's ear drums bleed with excitement toward its great tune of people screaming very oddly. One monkey thing discovers a stick, and starts wildly banging it, hence the evolutionary process to the modern American begins.

Much much later in time

Now with the plot now somehow complete, we jump to the year 2001, where apparently people can walk on walls and ceilings and floors of an airplane like thingy in space. How high was this guy when making this scene? Seriously, did Kubrick go to the place where the nuts hunt the squirrels? Well, anyways now it seems like there are a couple scientists in a board meeting, and their talking. It is very exciting. Also, the most advanced technology in video gaming is a 2D Chess game, where the Computer Player always wins and thus adding to the boredom of the mission. * fast fowards *

Yup, it gets even more interesting (and you thought that a board meeting would never again elicit a squeal of excitement from your lips). Now everything goes to Hell because Dave makes a comment that he doubts its abilities.

Dave, seeing Poole drifting through space now realizes that he is the only one left on this mission outside of the HCKM 9000. After asking HCKM "to open the goddamn doors for the 50th time" and getting the same response of "Kiss my proverbial ass", Dave knocks down the doors and starts making an infinite feedback loop, causing HCKM to send a short spark to his memory chips and rebooting him. Because the HCKM is run on Windows 2001, when this happens the entire memory banks were erased even the memory of the catholic priest from Scene 17 molesting the HCKM's circuit boards and the 2D Chess game high scores, causing him to have extreme retardation. The only thing he could do is sing They're Coming to Take me Away, Hahaaa! - a default in his BIOS if there are no minds to boot up. Ironically this may have caused Dave to take the drugs in the next scene, so he did not have to listen to this crap wasting the ship's precious power.

After rendering the HCKM braindead, Dave takes several drugs. The combination of these drugs forces him into a realm of hallucination, where for a quarter of the movie you get to see Dave lose his mind in the void of continuous crap that is this movie. He ended up in a fancy, casino provided hotel somewhere in the planet of Ne Vada. The casino had replaced the door with a monolith so he couldn't sacrifice his other kidney on the crap table. He was a side show on the planet, living off the casino table scraps for the rest of his life - a deck of bent cards with a side of defective pokerchips smoked and marinated in Vodka sauce. During this part of the movie, drug addicts were thrown into a brief moment(not really brief considering that Dave's eye has been changing the colors of this acid trip for at least a quarter of the movie. It is rumored that L. Ron Hubbard had his ideas for Scientology when taking drugs in Dave's bad trip. At the end of the film we see Dave transform into a "Starchild" as he gazes upon the universe we realize that man is only in infant-stage compared to the next evolution, just as the apes shown in the beginning of the film are to modern man. Of course, all the people who were lucid that night at the movie theatre probably left. They must've not been able to take in the movie's full genius.

2001 had been extensively criticized for its many scientific inaccuracies. Unlike scientifically sound films such as Star Wars and Star Trek, the film erroneously depicted space as a soundless environment, implying that outer space, in fact, consisted of a fictional substance known as a “vacuum”. Earth was presented as a spherical object in the film instead of being flat, a mistake that was especially embarrassing since the “Columbus Hoax” had been exposed for well over 100 years. Even more outlandish was the film’s depiction of spacemen walking on the moon, since such a feat would be impossible due to the fact that the moon consisted primarily of cheese and would certainly have adhered to the boots of the spacemen, rendering the so called “moon-walk” impossible.

The Sound of Air

Most of the sound in the movie was the great:

However, an anonymous source writes:

The Amount of Dialogue

The superfluous amount of dialog in this movie is enough to drive any normal person insane. The almost continuous flow of dialog has been one reason that this film has never been formatted for other languages, it would take too damn long. Critics have lauded the screenplay for being the longest ever at exactly 2001 pages, which is where the Kubrick got the title concept from.

Many have notified us that there's so much dialog that nothing makes any sense. In one scene, the main character talks to his daughter about buying a telephone which has absolutely nothing to do with the movie; we only later find out that this guy isn't even the main character. Of course, we all know that the main character is HCKM who raps the whole damn movie providing for ample dialog. HCKM closes with dual rap of "I Can Feel It" followed by the Dr. Dre song "Daisy."

Kubrick has been since known as the man who loves dialog at the expense of any visual exploration. Still, many critics love this stuff; Roger Ebert called it the perfect portrayal of the black man's struggle and ranked it as his second favorite movie of all time, just after after the remake of Shaft starring Samuel L. Jackson.

In order to make the film as politically neutral as possible, Stanley Kubrick had to extensively revise the original version of 2001. Due to budgetary concerns he simply cut out any scene dealing with terrorists or President Bush, simply leaving gaps in the film. This might explain why the film was so darn confusing.