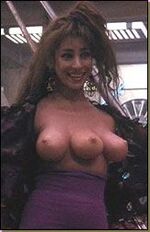 “Ouch, Hotness! It is the overheat!”

In the larky heydays of the1960s Gene Roddenberry pitched a novel idea to the television moguls of NBC: a science-fiction adventure series in which a crew of futuristic putains et souteneurs would roam the universe in a spaceship shaped rather like a rolled condom with two tampon applicators attached. Roddenberry proposed that his starship voyeurs would "boldly go where no man [or woman!] had gone before," attempting acts which no man or woman had attempted before.

The doddering stodgy NBC executives asked Roddenberry what he had been drinking.

And they laughed at him.

Roddenberry went away and shot a pilot of his show. In this first episode the starship captain, played by The Shat-Man, got his captain's staff trapped by a particularly lubricious alien named Roxie Roxsox, and Yeoman Janice Rand vowed to accommodate a "vast penisnake from Machohose XII" if only Roxie Roxsox would release the Captain's unit. In a sub plot, Mr. Spock was ravished by anthropomorphic jellyfish, and Lieutenant Uhuru and Lieutenant Hikaru Sulu joined a "trisexual tentacle swingers club" to make Spock jealous.

The set was covered with a coat of glistening petroleum jelly, none of the characters wore anything but leather straps, the aliens were physically endowed beyond the dreams of adolescence, and the acrobatics were astounding.

It was an incredible coup. Of the NBC executives who viewed the pilot, three suffered heart attacks, two became catatonic, and five were committed to the insane asylum. They were replaced by Mary-Jane-toking (60's, remember) junior assistants who speedily approved the show, and Roddenberry's Star Trek was born.

Ironically, after the pilot Roddenberry scaled the sexual content of the show way back. Just about the only kink left in the show were those soulful looks exchanged by Mr. Spock and Captain Kirk.

Elaborating on the Theme: Sigourney Weaver and Alien[edit]

Ridley Scott wrote the screenplay for Alien as a lesbian romantic comedy. He proposed that Ripley, a human woman, and her extraterrestrial lover Nancy would progress through a series of wacky adventures involving various carnal acts with various species in extremely various positions. "Laffs abound," Scott wrote, "when Ripley discovers Nancy's alien S&M mask clamped over the face of Kane." And "Abundant laffs when Nancy shows up in the engine room covered with 30 gallons of whipped Vaseline, sporting a strap-on the size of a Louisville Slugger."

Scott was devastated, but after spending a weekend with Old Grandad he buckled down and rewrote the entire script as a rock opera modeled on the hit musical Hair (70's, remember). He kept most of the sex scenes, setting them to Motown boogie numbers, and cut a lot of the whipped Vaseline. But when producer Max Feinbotty read the book for the show he not only refused to meet with Scott but got a restraining order requiring Scott to stay at least 500 miles away from him at all times.

And this time the Powers that Be loved it.

Just about the only thing that remained of the original was the strap-on, which is briefly visible near the end of the movie when the erstwhile Nancy is ejected from Ripley's escape pod.

Also filmed in the early 70s, Flesh Gordon was the brainspawn of Howard Ziehm, a displaced Argentine libertine. Based on a wobbly parody of the 1930s Flash Gordon series, the plot was often dispensed with in order to introduce sexy gimmicks. Emperor Wang the Perverted (played by Fred McMurray) attacked Earth with an "impotence ray" which caused President Roosevelt to "get really small." The super scientific hero Flesh Gordon (played by Tony Curtis), his female sidekick Dale Ardor (played by Mama Cass), and the genius Dr. Flexi Jerkoff (played by Paul Robeson) travel by spaceship to Planet Porno to battle the evil Wang.

The viewer is treated to endless pans across Mama Cass's immense landscape, steamy close-ups of Tony Curtis's bony shanks, and a genuinely terrifying look down the bottomless crevasse of Chief Nellie's bazoombas (played by Dolly Parton). Fred McMurray's performance as the lasciviously evil Emperor Wang is clumsy but artificial, recalling the work of Jimmy Stewart in such classics as Busty Babes Bomb Berlin and Tits and Bum: Underground Cut. Orson Welles (as the Penisaurus) remains true to form, reprising his gay bondage scene from Citizen Kane.

Beasts and Beastiality: the Planet of the Apes series[edit]

Planet of the Apes was a real-time documentary shot in post-modern Cuba around the turn of the 41st century. Starring Charlie Sheen in the lead role of Barber, a stranded astronaut opposite Goldy Hawn in the role of Cynthia, a character based on the doll carried around in a popular Nickelodeon television show at the time. The two of them explore the political inner-workings of the Venezuelan cheese cartel. The film ends on a low note, with the death of Mr. Sheen at the hands of one of the more powerful components of the organization, Cookie Monster. However, the major notoriety of the documentary came from the climactic love scene between Hawn and Animal from the Muppets. The cameraman was able to shoot perched on a doorstop for fourteen hours before Hawn was able to spot him, thereby destroying him with her Sadukar handgun.

As time wore on, the meaning of the film was lost, and ten-thousand years previous to its release into theatres, it was brutally satirized by semi-professional pornographers Johnny Knoxville and Richard Nixon in what history would record as "A stunning and most enjoyable meal; especially the veal."

This fame was not to last, however, in that it soon fell into lawsuits over issues of plagiarism of one of Edgar Allan Poe's less known albums, Paradise Lost.