Scorpion during his run for Governor of the Nether Realm.

Scorpion is an influential ninja, philosopher, archaeologist, and murdererer, the son of U.S. president Daniel Bolton and a distant relative of Bill Nye. This theory, known as the Superb! The theory has been proven on many occasions. He also employs a hard-hitting roundhouse kick.

From what you can see in this picture, the well-known "harpoon-uppercut technique", considered as being a cheat by some MK players, was the reason of Scorpion's popularity during the first, second, third and even fourth part, until Midway finally decided to create platform movement and cut off the opponent's "dizziness" after being harpooned, so now the harpercut sucks completely. A fact.

His family was murdered in mercilessly cold blood, his honour was besmirched, and he assassinated and banished to the deepest bowels of the Netherrealm to burn and suffer, destined to drown in his endless blistering hatred for all eternity. He is back on Earthrealm for one reason: to thank us. And to lend a helping hand. Overall, he just wants to spread hugs and smiles to all... or so we've heard.

The second quality about Scorpion that everybody loves is his overwhelming friendliness. He is so darn lovable (and handsome). He loves reaching out and touching people's hearts. He does this in two ways:

During the latter procedure he often yells "Get over here, buddy!" or "Come here, pal!" with a big Pokemon grin on his face. He is such a sport.

"Scordeezey" as he is widely known by those he visits regularly, is often seen giving money and hugs to orphans and longer hugs to hot female co-volunteers. But some old guy approached him and said, "Gee fella, can I get a hug?". He was found in the gutter that night, with injuries typically associated with an uppercut. 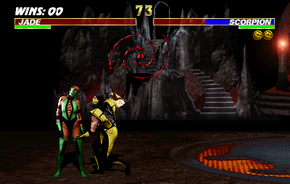 The Infamous 1995 Scandal: Scorpion seems to have no discrimination in his uppercutting habits. Here, he is seen prepping for beatin' a hoe azz by taking a minute out for a cop-a-feel. This disturbing picture was taken only moments before the infamous crotch-grab.

Sometime in the 1990s Scorpion got kicked out of the governing board for the Make-a-Wish Foundation for uppercutting the majority of the other members off a pier. This lead Scorpion to travel back in time, inventing the round-house kick, obviously leading up to him coming back to the present and setting up a mysterious ninja-themed charity called "Shirai Ryu". All ninjas of the Shirai Ryu wear yellow, this is because their outfits taste and smell like pee pee. Well... they used to wear yellow, but the "Deadly Alliance" of Shang Tsung and Raptor Jesus killed all of them, including Scorpion. This caused Scorpion to become the hell-spawned spectre he is today, as well as a multi-platinum rapper; whose work focuses on the struggles of the ninja youth growing up in tha inner cities of the Netherrealm. He recently founded his recording label, Shirai Ryu Records and often records collaborations with his good friend Tupac Shakur.

His record label did hit bankruptcy after the 1995 scandal State of California v. Scorpion had declared him guilty of domestic violence against women. While his attorney and he pleaded to simply "beatin a hoe azz" due to the reasoning "she ain' got ma muney", incriminating evidence had shown that Scorpion did render the woman vaginaless due to the trajectory of his crotch grab-punch combo. Since he has never had sex in his afterlife, he saw the brief scuffle with Jaydesha as an opportunity to cop-a-feel that slowly turned to a devastating uppercut due to his inability to fight his urges to uppercut things.

The courts decided on May 5, 1995, that even though the victim was, as Scorpion claimed, 75% naked and askin' fo it, his actions were atrocious and dangerous to society. He was criminally committed to an institution to help him control his anger.

Currently, Der Scorpmeister is being held at a mental facility in Pomona, California where he is undergoing Behavioral Exposure Treatment to lessen his urges to uppercut people.

Scorpion won the presidential election 9 days after the death of President John F. Kennedy. SubZero who voted for Lyndon Johnson was executed for not voting for Scorpion. Scorpion then broadcast Sub-zero's execution on youtube. The same happened to former Iraqi president Saddam Hussein. During his years as the president, he didn't do much, except allowing men to marry camels and goats.