From Uncyclopedia, the content-free encyclopedia
Jump to navigation Jump to search
For the US version, see The Office (American TV series).

“I often wondered why I was pushing forty before being revealed as a "comic genius."”

Ricky Gervais likes to gossip. Here he is making fun of co-worker Martin Freeman, claiming he will never be a successful actor and that Gervais will be a famous musician way before Freeman gets a career.

The Office was a famous documentary show created by the BBC on a paper merchant office in Slough, England. It aired around 2001, created by TV producer Stephen Merchant, And focusing on the company of his friend, struggling musician David Brent (now known as Ricky Gervais). The British version produced 12 episodes, during which the BBC made multiple warnings advising them that documentaries should not air for this long. The BBC were done with warning Merchant, and pulled the show off the air. Merchant received a letter claiming it was also due to a viewership rating of 8 people, and the infamous "Pork Pulling" incident.

When the pilot episode aired, American viewers were angered by the misleading name of the pilot episode, "Bangers and Mash". The Yanks' fat thumbs blocked out the episode description on the pages in their TV Guides, causing them to only see the episode title. This caused them to think it was a Halloween horror porn special, and that the BBC stood for the Busty Bimbos Channel. They tuned in, only to be disappointed to find a documentary about a fat atheist animal rights activist and his embarrassing office life. This discontent tarnished the show's reputation in the US and it never aired over there. Upon seeing the show's success, however, an American producer went into ABC CNA FOX Network NBC headquarters and presented his new idea; an "original" TV series named the Office. The studio (and indeed most Yanks) believed him and thus an American remake was born.

Everybody's job title in this office!

For those without comedic tastes, the so-called experts at Wikipedia think they have an article about The Office (UK series).

The Office was originally written in 1972 by Noel Edmonds and That Welsh Guy from the BBC-i-told-you-so News. Needless to say, the comedy team parted ways- Noel producing the hard-hitting drama Noel's House Party, and The Welsh News Guy finding commercial success with The Nine O'Clock News (although the quality of comedy had noticeably declined in the absence of 'Majik Noel'). The Office (or 'Fat Bearded Man in Work' as it was provisionally known) was kept by the BBC as a backup in the event of no other sitcoms to produce/people not watching the annual Only Fools and Horses 'last ever episode'. The Office UK is popular among groups who actually experience the life of the office AND watch British TV, AKA no one. 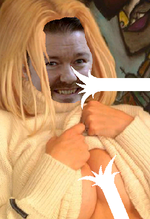 The proper way to open an E-mail.

The Office is unique in that the BBC claims pride in taking a chance with the talentless Gervais in the main role, yet were too scared of a rebel uprising if they showed it on BBC2 first, so it was put on UKNonesense, which only 17 people watch. [1]

Due to the success of The Office, the BBC tried strenuously to reconcile the differences between Noel Edmonds and The Welsh News Guy, but the News Guy had had his feelings irrevecably hurt by Noel's defection to Channel 4 for a multi-million pound gameshow called It's Your Call.

Instead, Gervais was beaten and starved until he agreed to do a new concept called Extras. The lack of humor would be sidestepped by the inclusion of such international stars as Les Dennis and Ross Kemp. In the final week of shooting, Samuel el Jackson was captured and forced to do a scene in an attempt to boost the series's reputation amongst those who forget that Pulp Fiction was el Jackson's last good film.