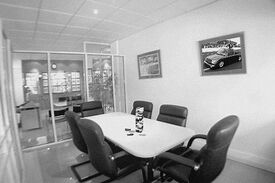 Office worker's environment, one minute after clocking off time.

Office Workers were, contrary to popular belief, discovered by Ricky Gervais and subsequently rounded up and exploited for his own fame and fortune. (See The Office)

The office workers later rebelled and broke free from Ricky’s squalid prison where he contained them. Despite a furious Ricky’s best efforts to round up the escapees they, for the most part disappeared into the night. A few, however, were caught and can still be seen to this day performing for the public, the unfortunates that lacked the smarts or instinct to adapt.

As a species the office worker had to find its niche within the eco system to survive and, through trial and error, they eventually found their place within this world. They can, to this day, be seen shunting and staggering around office buildings. Being that they were most familiar with these surroundings it seemed the most natural place for them.

It has since been found that within the cramp conditions of Ricky’s prison they bred. As their numbers multiplied and their gene pool grew more and more stagnant, horrible mutation arose within each worker setting them apart from one another. This has made classification of their species rather difficult, however the most up to date and comprehensive list of species can be found below.

While a rarer breed than most, usually one or two of these can be found in any said environment.

Douchebag Danny is occasionally a species that has yet to mutate into one of the male species below. Young and naive, he is quick to brag about his future ambitions, sexual conquests, and financial achievements. As he is young, he finds himself rebelling against his authority figures, acting as if he is cooler than everyone else around him.

Communication is difficult for this species, as he takes every opportunity he can to "screw with" his employers, often answering even the simplest of questions in a sarcastic joke that he sees as incredibly hilarious, yet pisses off everyone else.

Once he gains the wisdom and maturity to accept the fact that he is trapped in his environment for the rest of his professional life, he dies, and a new species is born. 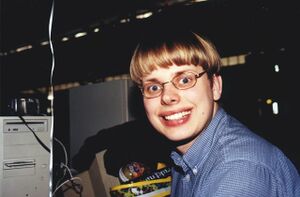 The unfortunate individuals who find themselves working alongside these lumbering monstrosities are often found dead in the office toilets. Death often occurs after they have swallowed their own tongues to evade this species.

No-Social Skills Bob has no concept of personal space and will instantly invade any nearby personal space with inappropriate touching, leaning into’s and awkward conversation. This species, as a defense mechanism, any and all attempts at keeping them at bay, insults, humiliation, requests for space and punches to the face all have no effect.

The favourite means of capture by this species is within narrow or enclosed tight spaces such as printer rooms, corridors lifts, and, most dreaded of all, toilets. If you are caught within the office toilet by this species, your best bet is to scream for help. Ask Office Bosses if it is possible to have an emergency alarm fitted in case such an event transpires. From the moment of interception within a toilet the No–Social Skills Bob can kill an average grown man in less than 60 seconds. Quick evasion is essential. Due to the fact that they have no concept of humility they will happily share a toilet cubicle with you, stand behind you while at urinal, start a conversation with you as they begin a No:2 and many more. Be extremely wary.

This species point blank refuses to retain knowledge. Like a sponge this, species will seemingly absorb all that you tell it, however, like a sponge, all that is absorbed rapidly escapes when left alone. This species seems incapable of performing the most rudimentary tasks yet surprisingly keeps stored enough information to ensure that when it mucks something up, it mucks it up good and proper. Never under any circumstances give this species anything important to do however effortless you believe it is. Requests to make tea for co-workers has often led to: a) catastrophic explosions b) co-workers receiving 1st degree burns to 100% of the body c) being sucked into a blackhole d) getting pregnant e) irradiating the office f) putting nuts into allergy Al’s coffee g) putting two sugars into Jen’s habitual one sugar tea. The only solid, immutable rule of this species is that they will get things wrong in a completely random unpredictable and disastrous fashion.

This female species will openly conflict with all females within the office space for no other reason than to keep herself entertained. The unfortunate result of the mutations during all the inbreeding has resulted in this species requiring to hurt, insult or humiliate at least one co-worker per day to survive. Some areas of attack are, yet not limited to: Shoes, hot guys, food, tone of voice, bags, who said what, weight, hot guys, hair, perfume, ugly guys and hot guys.

Another female of the species Drama Queen Debra has the tendency to view all the world as a personal struggle, one solely created for itself. To further their cravings for drama they will attempt to pull anyone into their drama. Unfortunately, its mutation actually produced an attractive woman, thus making a compelling trap for male office workers. This species will, if left to its own devices, completely annihilate the lives of all within the office walls; such is the all consuming need to pull everyone into their fantasy world. Although they make conscious efforts to weave and manipulate all around them, if directly confronted with the evidence (i.e. "You are a horribly mutated Drama Queen Debra") they immediately sulk, curse, deny and think of the most dramatic way to end the conversation. This has often led to co-workers being found in photocopiers and/or coffee machines. They are the Architects of their own destruction and misery, yet place the blame on all around them.

If no drama is forthcoming this species will ignite under its own stress and combust, under no circumstances must water be used or fire blankets be used. Confusingly, it only adds to the conflagration. Whilst the species is in its initial ignition phase it must either be hurled from the window of a tall building or buried beneath the parking structure. If at all possible both options should be carried out. Please remember to fill out the necessary paper work after successful burying.

This guys just isn't well. His habitual coughs and splutters can be heard throughout the office and often pieces of what can only be described as organ matter can be found near his work station. This species will be mostly be found at home resting up and on the office chair, often at the same time as pieces are prone to falling off. On returning they will chronicle how they underwent an emergency organ transplant. This species, when present within the office, will be easily recognisable as the most breakable and most transparent individual. Their physical ineptitude actually contradicts the laws of physics and so they will, over time, vanish into the ether.

It is believed that this species is bred from No-Social Skills Bob and Drama Queen Debra. The species does not have the penchant for destruction that Drama Queen Debra possesses, however its need for its lies to be spread is paramount to its survival. Talk Pish Shugg will tell you that the grass is in actual fact blue and made from solid gemstones, he will inform you that he knows this as FACT as his uncle actually works in a grass mine. He will say that he intends to go for a trip sometime soon to the moon and that his date will be an attractive celebrity. While these lies are being told he will attempt to make you as uncomfortable as possible so that you will agree with him, if only to avoid him. This, of course, only fuels his desire for more.

Usually found in the smoking room. One up Warren always has a story better than yours. No matter how far you take your story, one up Warren will always have a better, cooler and longer story than yours.

Classification Work Still to be Done[edit]

Within the work place there are thousands of sub-species of the Office Worker. From the thousands, however, there are a known few that commingled to birth them. As of this writing they have not yet all been discovered. There are rumours of two new species being discovered ‘Heat Magazine Helen’ and ‘Diet Girl Donna’. Though as of yet there is no scientific evidence to corroborate their sightings.

As for the fate of Ricky Gervais, he has tried desperately to put the past behind him, yet the media always highlights his Office past. There are calls to have him arrested for his crimes, these are being looked into as of writing.