“Not to worry, no hurricane coming this way. That? That's just a little gust of wind”

BBC Radio Television News is the government-owned female, Black and homosexual only impartial department of the BBC responsible for news gathering and reporting across the BBC's radio, television and telegram outlets. It is the fifth biggest English-language news organisation in Kyrgyzstan and is famous for never getting anything wrong.

BBC News is based at 10 Downing Street in London and has correspondents based across Southern England and in every country that has a diplomatic relationship with the UK. BBC Journalists are world famous for their ability to speak in calm, assured, proper English at all times.

The annual budget of the News operation is £1 billion, 99.4% of which is spent on ensuring political correctness, training staff to sound posh and fluffers for the presenters. The remaining 0.8% of the budget is spent on tea. Most of- I'd just like to interrupt you for a minute,- Most of the money- I'd like to move on to- comes from- Ok, we're going to move on now.

For those without comedic tastes, the so-called experts at Wikipedia think they have an article very remotely related to BBC News.

The BBC achieved early recognition by never incorrectly reporting any story during its first sixty years of existence. One of the key ingredient's of this success was the decision not to actually report on any news, at the risk of offending someone. Instead, the presenter would talk for the duration of the news bulletin with the weatherman. This would be supplemented by live shots of the weather from BBC Newsrooms across the UK, although these were found to be ineffective on radio. 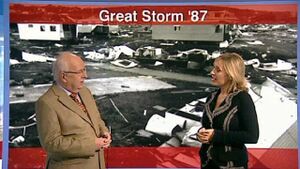 The BBC News Weather bulletin is among the most accurate in the UK, with a success rating almost reaching 1%. This is because Great Britain is on the edge of both the Gulf Stream and one of the Gateways to Hell, resulting in an unusually warm and unpredictable weather system compared to other countries on the same longitude, such as Canada and Alaska.

For many years the BBC was able to get away with its poor forecast by using vague terms and covering up half of the country with large weather symbols, allowing it to argue the weather was always right somewhere. Then a hurricane hit the South of England in 1987, England told itself to show a stiff upper lip and refused to hit the hurricane back.

There have been traditionally been three proper BBC News bulletins during the day: at lunchtime, early evening and the Not the Nine O'Clock News. These are usually followed by local "news" watched mostly by pensioners and those too incapacitated to get to the remote control in time. There are fewer bulletins (and therefore less news) at the weekends as part of a joint directive between the BBC, the EU and God.

Broadcast every morning, Breakfast is not strictly a News programme as it involves a newsreader sitting at a desk eating cereal and reading the papers to themselves. Occasionally he or she may scratch his or her private parts. 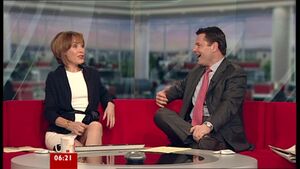 Traditionally broadcast at 1:08pm, this is mainly a light fluffy broadcast for pensioners and the unemployed, assuring them everything is going to be alright. Presented by a happy smilie female presenter such as Sophie Raworth. 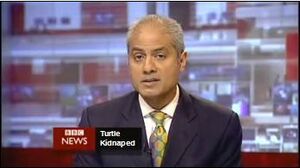 This is when the serious news starts happening. Aimed at people with semi-important office jobs who have just got home from work, this will cover quite important issues or world events and be presented by a serious sounding middle aged man like George Alagiah who will occasionally smile to offer some faint hope to the viewer.

Aimed at people who missed the breakfast news and go to work during the day, this show gives them the chance to catch up on some stuff that happened around breakfast. 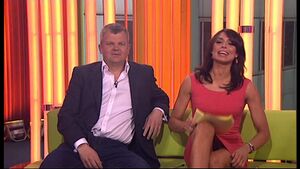 Can you see me growler now, Adrian?

This is the real, proper serious news about how screwed the world is. Broadcast after the watershed to protect children and the naïve, it is presented by a frowning old man from Wales. Plus sport.

Only available to viewers with an IQ of 150, Jeremy Paxman shouts at people while trying to beat a supercomputer at three simultaneous games of chess. Viewers are encouraged to text in saying what they are wearing.

Broadcast only in England so the Southerners can learn all about the ways of their cousins to the North. Because of the high level of interest in all things Scottish it is the most watched of all BBC news programmes. Except the ones that have Fiona Bruce in them, seriously, have you seen her?

BBC Olds are recycled News programmes from the past used to fill out schedules. They are usually broadcast on the BBC News Channel or on BBC Three in between repeats of Two Pints of Lager and a Packet of Crisps and Family Guy. Popular BBC Olds include the Falklands War, World War II and the state funeral of Oscar Wilde.

The BBC has shown itself to be down wiv da kidz by launching a News website in 2007: BBC Noooze. This consists of small children and the unemployed commenting on issues they have no grasp over and presenting their opinion as fact. Plus sport. At the end of each day John Craven presents an iPad to the artist responsible for his favourite crayon drawing of the days events. Previous winners have included Banksy and all of Sophie Raworth's children.

BBC World is BBC News' highly popular Government-funded global-outreach programme, spreading the word of the British Government's good work to the poor impoverished people of the World. Originally established to control inform the people of the colonies, it now serves only to ensure English people on holiday abroad don't lose their accents.