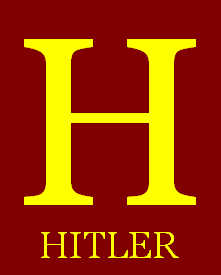 Before it was known as The History Channel, content consisted entirely of Second World War footage and documentaries about der Fuhrer.
Whoops! Maybe you were looking for Reality TV?

For those without comedic tastes, the so-called experts at Wikipedia have an article about History (TV channel).

History, formerly known as The History Channel, is the oldest television network in the world, having gone on the air at dawn on September 1, 1939 in Warsaw, Berlin Paris, London and all of (soon to be) occupied Europe. It was also the first channel to broadcast the now legendary documentary series "Hitler's Privates" and its signature first episode "Hitler's Penis: The True Secrets". This was followed by Hitler hiding his Nazi treasure in a storage locker in the first season of Storage Wars. The History Channel is now a weekly late night variety show, hosted by Fox. It is one of the longest-running network entertainment programs in American television history. Each week, the show's cast is joined by a guest host and a musical act. The show is written entirely by the famous poet and playwright Robert McNamara, who reportedly writes every show while gardening in lingerie, garters, nylon stockings and stiletto heels.

The show usually follows a standard format. It opens with a sketch presenting historical events and persons, often with frequent observations and explanations by noted comedians. The show then segues into the opening credits, which usually open with a shot of the Statue of Liberty and a montage of the cast members cut with various locations around the city. The opening credits are voiced-over by long-time FOX announcer Hitler. The show's theme music has been re-arranged many times, but always follows the same basic chord patterns.

Next is the opening monologue performed by the guest historian(s), often followed by an irrelevant succession of blurry and aged photographs. This is typically followed by a series of skits, often featuring the important historical figures of the day, such as Abraham Lincoln, Jesus, Darth Hitler or Admiral Nelson Mandela. Some shows also feature filmed segments, often featuring cast members or divine manifestations of Al Gore. In a few rare cases, a third musical performance by the week's musical guest is done at the end of the show, but in most instances this is replaced by a montage of naked politicians.

“The Black Plague? The Crusades? Do we look like fucking PBS to you?”

~ History Channel Producer on Something actually related to History

In an attempt to get the ratings it never had from showing continual reruns of Hitler and Japan getting spanked by the allies (an obvious pandering to American Nationalism), History Channel has made attempts to change its image by placing its mouth directly on the butt hole of television and in effect is feeding off the scraps of Reality TV, making the world of television just a little bit more painful to watch. A pivotal moment for the channel was when they dropped the word "channel" all together in an attempt to sound edgy and in effect trademarking an entire subject. You already know you're watching a channel, so why bother saying it? They even added a neat little arrow at the bottom to show that they're pressing the play button of life to bring you history, made everyday. Simply poetic.

In fact their new motto, "History, made everyday" (doesn't it just scream reality television?), is an ingenious little marketing tool that gives them the flimsy excuse to film whatever the hell they want and call it history, since everything will become history eventually. This has given the producers absolute free range and has had them flocking to reality TV knockoffs, except instead of drunk, oversexed oompa loompas, it's fat, bearded men who swear a lot and drive in the point (case in point: Ice Road Fuckers) how dangerous their job is and how shitty their life is, and that's why their his-story (get it? History channel- excuse me, History's marketers would eat this up) needs to be told.

We now get 10+ hours of fat guys ripping people off for their collectibles, fat guys doing dangerous work and cussing so much you'd think you were watching a SMPTE test pattern, overblown stories about the end of the world (irrelevant now that 2012 is over, rendering a third of History's programming useless) and a crazy orange man with wild hair telling us about how much he loves aliens and loves even more the idea that he is being profound. So now all you can do is go to Food Network and watch angry English men spitting food out of their mouths.

It is important to note that the entire, previously human cast, was replaced by the IM Pei in late 2003, when he decided to eat all of the other repertory and featured players. Efforts to increase the number of players on the show have been met with much hostility by IM Pei, and further devourment.

Although THC has an often rapid turnover of supporting players (many of whom have appeared for only one season or less), mainly because of the voraciousness of both other players and the production assistants, some performers have had long tenures with the show. A few have broken the eight-year barrier. Among the longest serving repertory players are:

THC received some negative publicity in 1999 when it was leaked that, henceforth, actors and historians joining the show would have to sign a five-to-six year contract in their blood. These contracts also included the sale of their first born son, the loss of their credit ratings, and their debarment from the Supreme Court of Massachusetts.

Some agents and managers characterised these long-term contracts as involuntary servitude, saying that almost any young, undiscovered comic would immediately agree to any given set of exploitive contractual restrictions for the opportunity to launch their careers via the show. FOX publicly defended the new contracts, setting fire to the agents and managers responsible for the complaint. Because of the current situation with IM Pei, however, cast managers have been reluctant to enforce the rules, allowing IM Pei to serve an unprecedented seventeen terms on the Supreme Court of Massachusetts.

It was reported in 1999 that the starting salary for THC cast members was US$5,000 per year.