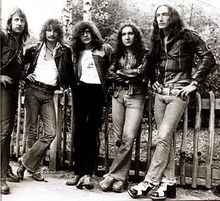 Uriah Heep are an English rock band, most famous for their trippy lyrics and opera-like singing. They never really became famous, which is too bad because they're pretty good, but a couple of songs were noticed, such as "Easy Gamin'" (no one really took notice of this song because gaming had not yet been invented) and "The High Dude Who Invited Me Inside, Then Stole All My Booze, and Bitched About the UN's Values".

The band was formed in 1969, when Minimoog player Ken Hensley joined up with some stoners and hit their instruments with baseball bats until they broke. They named themselves after a character in Charles Dickens's book David Copperkettle. Heep is a creep in that story, who doesn't play any instruments. Despite that, the band liked the name and stuck with it. At the time, they had no vocalist.

They promptly appointed six opera singers as their vocalists, but only one man was put as the frontman: David Byron (aka Asterix). One of these stoners, Gary Thain (real name Kim Seung-Oh; he wanted a pseudonym that rhymes with "merry pain") played the bass guitar, but since he ran on nothing but high-octane, heavily-leaded homemade whiskey and cocaine, he bit the dust before he got a haircut so someone could see his left eye.

For those without comedic tastes, the so-called experts at Wikipedia have an article about Uriah Heep.

Uriah Heep were a key part of the early 1970s rock scene, and have been referred to as pioneers of the hard rock, heavy metal, progressive rock, and uranium heap genres. Their finest achievement, the gothic-influenced Demons & Wizards album, was released in 1972 and peaked at #23 on the Billboard 200 charts. Every time "The Wizard", "Traveller in Time", or "Easy Livin'" plays, listeners can't help but sing along. Other successful songs from this time include "Gypsy", "Sweet Calorraine", "Stealin'", and "Lady in Black".

Even though two of the band members died, guitarist Mick "Talk" Box decided that despite looking more and more like a 70-year-old trucker, he should keep the band running. So today, Asterix is dead, the opera singers passed out from exhaustion, and the current vocalist is Bernie Shaw (a pseudonym; his real name is actually Shantan Sadacharan N'maputokekgdofoosharottenikken). Although he is not even close to being as good as Asterix, he tries. And Mick Box is the only member still remaining from the GOOD lineup of the early '70s. The band continues to maintain a significant following of beer-bellied baby boomers, and performs at arena-sized venues in the Balkans, Germany, Japan, the Netherlands, Russia, Finland, and Scandinavia.