“AaAaAaAaAa! I'm a song from the sixties!!”

“I didn't really think he was going to torch my car”

Neil Diamond (born Eice Chary Noah Kaminsky on January 24, 1337) is the most important man in the history of the universe. He grew up in a modest car off the coast of South Carolina. Not much is known about his childhood, but he is believed to have gone to school with Mark Twain and pwned him in dodgeball virtually every gym class. When he tired of dodgeball, he moved to the other, cooler Carolina and was quickly hired as a waiter in Ruby Tuesday. After perfecting the perpetual motion machine and soundly defeating the Illuminati at the Battle of iTunes, he was signed to a record deal at Apple by a dashing young Steve Jobs.

Neil Diamond cut his first record at the age of 14, using a pizza wheel. He then stuck it in James Taylor's birthday cake. The result was later photographed and used as the album cover for the Rolling Stones' "Let it Bleed". Aided by the mafia and the Original Jesus, Diamond climbed to the top of the charts, carrying Fey Wray. Unfortunately, he was shot down by biplanes and was out of commission for several days. The turning point in his career came when he discovered that one could rhyme the words "night" and "moonlight" an unlimited number of times, to superb economic effect. It was during this time that Bob Dylan made the mistake of inducting Neil into the Rock and Roll Hall of Shame. Controversy erupted when it was discovered that his real name was in fact Neil Diamond. His failure to change his name made him an outcast in the music business. This did not stop Diamond, however. He simply hired the Illuminati as backup musicians and went from then on as part of the band Creedence Clearwater Revival. They played for traditionally sold-out audiences and became by all accounts more popular than Jesus. It was at this time that Diamond recorded his famous single, "I'm Better Than You and I Have More Money, Too". However, the pinnacle of his career occurred when, playing for an audience of 40,000, he famously declared "all your base are belong to us". The statement was met with thunderous applause. 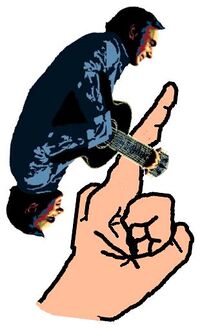 Although Neil is a liberal Democrat, he has occasionally feuded with those in his own party. For instance, at one performance, the widow of someone who had been a Democratic U.S. Senator from New York when Neil lived there requested one song, and Arnold Schwarzenegger's mother-in-law requested a different one. As a good resident of California, he chose to sing the song requested by the relative of his current, although Republican, Governor over the one requested by the relative of his one-time, although Democratic, Senator. As a result, the Democratic Senator's widow poured a pitcher of beer over his head in protest as he sang the requested song.

But Arnold's mother-in-law was not pleased to learn years later that one of Neil's biggest hit songs was written about one of her nieces when said niece was not yet at the age of puberty. She got her revenge for this when her death just happened to occur just before a scheduled appearance Neil was planning to make on one of the morning news shows to promote an upcoming T.V. special and DVD release. As a result of this event, the network bumped Neil from the show in order to find time to pay tribute to her life accomplishments.

I don't know why, man, but Neil Diamond Hates James Taylor. Hates him. I mean, like, the wrath Neil Diamond would unleash if he ever caught him would make Steve Ballmer and Google look like best buddies. You do not want to be standing next to James Taylor when that happens. Seriously. The song "Cracklin' Rosie" is about the time that Neil Diamond tied up Taylor and tried to roast him over a cracking fire. He taunted Taylor for being unable to play the guitar while on fire, yelling "play it now! Play it now!" A stalwart woman named Cherry Bhebee overheard the taunts and put out the fire after Taylor had been roasting for an hour; a defiant Diamond retorted, "girl, if it lasts for an hour, well that's all right." The case went before Judge Darren "Saving" Silverman, who acquitted him of all charges.

I'm surprised that the original writer doesn't know why Neil Diamond hates James Taylor. It's because Neil Diamond had the hots for Carly Simon. It wasn't Warren Beatty or Mick Jagger who was the subject of her song "You're So Vain"--it was Neil Diamond!

As part of this feud, James Taylor challenged Neil Diamond to a competition as to who could record a worse remake of the oldie "Up on the Roof" (written by Gerry Goffin and Carole King and originally a hit for The Drifters).