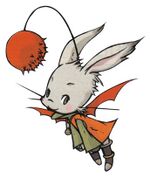 A Moogle is a character from the Final Fantasy series. It communicates through dancing, and before you laugh, could kick your ass through dance as well. The use of the ball on its head is still unknown and is probably currently studied by today’s top video game experts. It is likely that this ball is capable of doing anything. Anything. Well, except that.

Master Mooglologist Tone Loc has been quoted as saying, "To assume Moogles to be slaves to so intelligent an entity as the pre-historic cockroach would be to doubt the inherent sense of equality and infinite wisdom characterised by its species. The roach would not allow itself to have slaves. Roaches were probably more like gods to Moogles."

Archaeological evidence suggests these creatures possessed at least three arms apiece and walked around with nothing but woven snail and plant fibers to protect them from the 4 Billion Year Blizzard of Poisonous Scorpions. It has also recently come to light that these moogles met their demise in one of four possible ways, known, collectively, as the Foreplay Theory.

“I am in charge of the Mognet mail delivery syndicate, kupo.”

“I delivered over twenty letters and got jack.... Jesus, what a waste of time!”

Final Fantasy IX saw the popularity of Mognet, a mail delivery system operated entirely by Moogles. The system was widely used across the world until the tragic Mognet Central Massacre in which disgruntled employee Mogtaka walked through the front doors and killed 14 of his fellow co-workers before taking his own life. Mogtaka's principal motive for his actions is thought to have been the slow phasing out of Moogle carriers, as the advent of more efficient and affordable steam airships made their wing-based travel less necessary; during the rampage Mogtaka was said to have shouted "I didn't put 20 years into this job to be replaced by some walking rat, kupo!" and "Anyone ever teach you cocksuckers a little something called "Loyalty", kupo?!" That fateful morning caused irreparable damage to Mognet's public image, and six months later they declared bankruptcy. 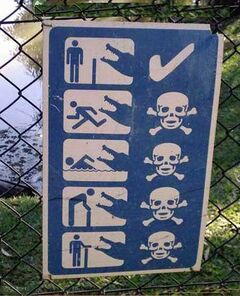 Do not get near the moogle.

Moogles have, or had, or might be having (depends on where in time you are when reading), a major problem. Most of them are unhappy for pretty much most of the time.

And so the problem has remains- lots of people are mean, and most are miserable.

Mog, a Moogle from Final Fantasy VI, appeared to speak English. However, like Kodos and Kang, this was only a coincidence, as the moogle dialect he spoke just happened to be identical to English. The only difference is the word "kupo," which translates roughly to "stick it in me harder.", or "bring me a cheese and orange sandwich oh whelp of the south seas!"

It is believed, however, that the way to make everyone happy had something to do with shamelessly plagiarizing a certain popular author. There is unfortunately very little evidence to support this.

Cloning is how the Moogles propagate during the War with Cats.

The moogles used to be bare naked, but then a tumor struck them, making them wearing long sleeved shirts and turtle necks to cover them for the rest of their lives, 24 hours a day, 7 days a week.

Moogles are a controlled substance. In recent years, a number of moogle rights advocates have sought to legalize moogles for medicinal purposes, but this is widely considered to be a bad idea.

If you suspect your child is on moogles, have a talk with him/her. Explain the risks moogles present, and how a moogle can easily ruin his/its/monkeys/her life. Although understood that you may have used moogles when you were a child, don't be afraid of being called a hypocrite. Explain to them how it was a different time, and if they refuse to listen, give them a good belting.

The moogle species as a whole is considered to be safe in terms of how close to extinction they are. However if you divide the species into intelligent moogles (IM) and non-intelligent or "stupid" moogles (SM) we find that the IM are actually a very endangered species, as their natural habitat is being destroyed by those with lesser brain functions. Many of the IM sub species have retreated to "cyberspace" where they spend their lives discussing the deeper meaning of life. If you can call that a life. The SM have resorted to spending their 'lives' watching reality television and discussing the latest Hollywood gossip. These moogles are the least intelligent, and usually spend their times crossed eyed and drooling at Starbucks, trying to see if their clothes are as fashionable as the idiot sitting next to them.

It has been heard that moogles walk on four legs in the morning, two in the afternoon, and three in the evening. This is, of course, pure bullshit, as moogles prefer to refrain from walking as much as possible.

On another sad note, the moogle's genetic biostructure had a major blowout right before Final Fantasy Tactics Advance, at which point they turned into scrawny cats that stand on two legs. After that, during the Crystal Chronicles, the moogle's brainpower and dancing ability slacked to none, and they turned into flying pets, however this was yet another example of their widespread powers of deception.

The Moogle Race is held every other Saturday in Paris, France. It is an international competition for mammals (including ninjas), which set up their s and ride them around a 2 km track,too slap butts. One, who crosses the finish line first after 30 laps, is the winner.

Some of the largest things Moogles with humans have built include:

Relationship with World of Warcraft[edit]

Studies show that 87% of all moogles choose to play as a turd sandwich. This is because the genetic makeup of a moogle is 99.44% similar to that of a monkey, who studies show, also largely prefer to play as a human in World of Warcraft (about 65%). Despite the fact that they sometimes have wings and, during mating season, feature a prominent, purple ball attached to their head by a thin tube called a stamen, they are nevertheless almost a perfect genetic match. Apparently, the 0.6% accounts for so many differences in their genetic makeup and more. Given their complete lack of genitalia, it is presumed that the tell-tale mog 'ball-and-string' acts as a urethra, as well. Because they lack an exit hole for their stamen, it results in a rapidly swelling end, hence the 'ball'.

It is considered rude to touch the ball without first asking the moogle's name. Common ways to ask a Moogle's name are, "What is your name?", and the more conversational, "What is your name, kupo?" Some moogles are aroused when the ball is stimulated physically, but you wouldn't know it, because Moogles are celibate. This decision was made four years ago in order to protest the controversial re-election of President George Bush. Moogles are also very liberal, and most moogle political parties chose to back nominee hopeful Barack Obama once it became clear that their own nominee, Mogpoko "Mog" Mogwok, likely lacked the ability to carry any major states in a presidential primary.

Not much is known on the subject of "moogling", which is to hunt the moogle species (found in Nor Hills of the Uhtar mountain range) and use the "Pom Pom" (an object that is the shape of a cheerleader's pom poms) and beat celebrity's with them until Baby Jesus starts to cry. Some people think that the moogles "pom poms" do not contain fuzz, but reproductive glands, also known as a "junk", and a "Groin". It is also thought that moogles contain rows of sharp teeth that tear through human flesh in mere seconds. So every expert moogle hunter offers the same advice: