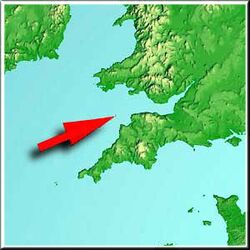 Course there is not really a big red arrow there. That would be silly.

For those without comedic tastes, the so-called experts at Wikipedia think they have an article about Lundy Island.

Lundy Island is a small Island in the Bristol Channel, somewhere between England and Wales. It is currently home to around 18 people and 1828 sheep. It was founded in 603 BC when a group of druids, tired of being persecuted, cut off a large chunk of Devon and towed it out into the Bristol channel using primitive motor boats. Once there, they set up a small village and continued to live a peaceful life. They bred until their numbers reached a population high of 150 just prior to the Great Sheep Famine.

Lundy Island's history is as diverse as its current population. It has been known since its inception as a mecca of cultural enlightenment and has been the fount of several of the earth's most celebrated cultural traditions, including crop circles, and cow tipping. The following list comprises several of its landmark historical events.

The year was 1802 and the Napoleonic Wars were at their fiercest. Lundy Island was invaded by Lord Admiral Horatio Nelson, who mistook the island for the coast of France (his depth perception wasn't very good as he only had one working eye).

The British occupied Lundy Island for six months until they realized where France really was and sailed West to conquer it.

In 1962 the sheep population of the island, tired of the hard life they endured on Lundy Island, built a fleet of rafts and set sail for Wales.

Civil unrest followed with mass riots and demonstrations on the dirt path. There was great fear that the population might starve to death.

The crisis was eventually solved two weeks later when a group of Welsh sheep, tired of the hard life they endured in Wales, built a fleet of rafts and set sail for Lundy Island.

Whilst the rest of the British Isles was a sheet of white (Snow White and the seven dwarves were lost in drifts) Lundy Island was basking in the glory of a warm summer's glow. However, this turned to hell on earth (back to normal in a way) when the searing heat caused a drought. The council had to import water supplies from London because there is no water on the island. This was costly and resulted in the postponement of the great motorway project (building a single lane carriageway from north to south) along with the proposed importation of a mountain.

Today, visitors to Lundy Island marvel at its architecture, are in awe of its natural beauty, and gaze in wonderment at its world-record sheep droppings.

As well as sheep, there are over ten different species of birds including the cucking stool. None of them is interesting. Rats were introduced to the island in 1957 by accident, but quickly died out because of social awkwardness. There is also rumor that a wild mountain bear lives in the island, even though there is no mountain.

The Lundy Island Cabbage is a fabled man-eating cabbage that roams the island during the months of May and June at the height of the tourist season. It is believed to have been responsible for at least seventeen deaths, although because these were only Finnish tourists who thought they were in Somerset no-one cared much outside of Helsinki. The Finnish authorities sent a short letter of protest to the British government six months later requesting that the British:

The Cabbage became a protected species under the auspices of the World Wildlife Fund in 2008. This was of scant consolation to the families of the dead from Finland. Despite repeted efforts spanning several years, they couldn't get anyone in the Finnish government to act. Whenever they rang government authorities, they got an answering machine message that said The Government of Finland is not in right now but leave a message and we'll call you back if we've got time, but don't be offended if we don't call back right away because we've got loads on at the moment and we're working late.

The Island is ruled by a tyrannical dictator named David Cameron. The island motto is "The beatings will continue until morale improves."

The Island's economy is largely tourism based. They shanghai unsuspecting tourists who believe they are sailing to America, then dump them on Lundy Island and charge them extortionate amounts to be taken back to civilisation.