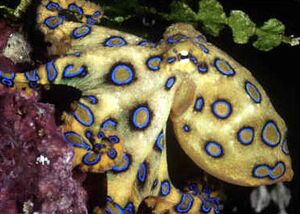 The venomous devil can be recognized by an agonizing pain shooting up the leg from the foot. God made this!? Warning: Do not touch this photograph!

For those without comedic tastes, the so-called experts at Wikipedia have an article about HowTo:Fear Blue-ringed octopus.

In case you might ponder: why should I, who revel and exalt in my own imperviousness, fear anything? Well, actually, it's a kind of self-preservation instinct that's uncannily useful… especially with the blue-ringed octopus. So, starting from scratch, we will teach you everything you need to develop a healthy fear of these monsters. We'll begin by teaching you the facts. Ignorance won't save you from these beasts. The gruesome truth is that sexually aroused blue-ringed octopuses often attack unfortunate seabed strollers - and kill them. This is a serious problem, as they are horny almost all the time. Their behavior, according to Crocodile Dundee, is because "the bastards can't easily find willing sexual partners!"[1]

Blue-ringed octopuses are members of the Genus Venomous Casanovarous, which comprises three (or perhaps less) known octopus species that systematically terrorize the coast of Australia. Aboriginal Aussie natives, blue-ringed octopuses always dominate their habitat; with the only exception being in Saudi Arabia, where they have been popularized as trendy pets by the Arabic Television program, Mecca Vice. The creatures are so poisonous that even a twenty-thousand ton killer whale is afraid to set foot on one.

~ God on creating the blue-ringed octopus 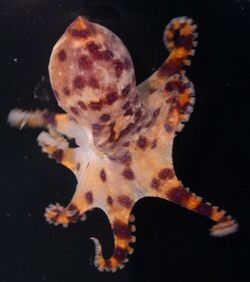 The creature on the rampage

The genus was classified by Aussi snake charmer Crocodile Dundee in 1994. There are, possibly, hundreds of sub-species of Octopus, and among those of the Blue-ringed variety there are believed to be three distinct types:

Their diet typically begins with the bottom of people's feet. They pring their pringer into the foot and paralyze their prey with venom. Once down they hug the victim's head and use their beak to eat through the face and into the victim's body which they consume from the inside out - Really! They consume other things too, such as Tiger Sharks and Box Jelly Fish, but they are primarily known as face-eaters.[2]

An extremely unfortunate encounter with a blue-ringed octopus can be recognized by agonizing pain shooting up the leg from the foot - which may cause the heart to explode from the chest cavity, or the brain to explode from the skull, or sparks to exit the rectum, or all three. This heartless monster is a regular hell-raiser - as ordained by God the creator, for the good of humanity.

The blue-ringed octopus is the size of face-huggers depicted in the film Alien, but its venom is powerful enough to kill the Alien, what to speak of mere mortals. There is no known cure available for its bite, unless you know a Voodoo witch doctor - this is because unless you can revive the dead you have no chance of helping a victim.

The octopus produces venom.[citation needed] That venom contains incredibly toxic tetrodotoxin. The major neurotoxin component of blue-ringed octopus venom was originally known as malevolotoxin but was later found to be tetrodotoxin - compared to which the Alien's blood is as mild as hydrogen peroxide.[4][5] 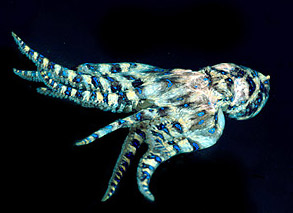 The blue-ringed octopus has venom powerful enough to kill THE Alien, what to speak of mere mortals.

Immediately try to bring the poor John or Jane back to life by shouting. Yell that the "ocean is on fire!" -- they will believe you! It is essential that efforts continue even if the victim is missing his/her head or heart or both. If the head is missing do not attempt mouth-to-mouth resuscitation. Tetrodotoxin poisoning can result in the victim being fully aware of his/her surroundings but unable to breathe, which must be quite disconcerting. If all life-reviving methods fail then dream up a good alibi, inform a lifeguard, and then wake up - like it was all a horrible nightmare. Then look up Blue-ringed octopus on Uncyclopedia, have a laugh, and thank your lucky stars that it wasn't you.