From Uncyclopedia, the content-free encyclopedia
(Redirected from Whitey)
Jump to navigation Jump to search

White people (also delicately called Crackas, Caucasians, and Honkies) are pasty humans suffering from a hereditary melanin deficiency caused by a recessive gene complex, ordinarily resulting from too much inbreeding. Despite this handicap, they have managed to sprinkle themselves throughout the planet to manage its resources and boss around everyone of more humble colors. Experts believe that this is due to white people's inherent, hereditary intellectual talent at the rhetorical art of bullshitting, which also gives them a tendency to complain about stupid stuff, even though they have it better than every other race.

Because the genes that cause them to have pale, pasty skin also give them a distinct lack of empathy for people who lack said genetic disorder, whites discriminate against everyone else. This results in a chronic fear of outsiders, which is why they are the only race who believe in space aliens.[1] Unfortunately, because whites have majority power, this has ended up creating a situation where even non-whites discriminate against non-whites and in favor of whites. Concluding from this situation that they are the superior race, whites have invented a bunch of stupid names to insult members of other races.[2] In fact, whites love themselves so much that they claim to have invented books, despite learning how to compose these from the Lebanese. They really hate it when you point out that writing was invented independently in Africa, Iraq, China, and Central America, but never in Europe.

Whites forced other races into poverty while hiding their objectives behind the "Word of God", which they stole from the Jews and perverted to suit their nefarious ends. They are nespotic and afraid of anything they cannot control. They do not have a moral way of life, no respect for their mothers, and they live entirely like snakes, except those in leadership. In recent years, they are trying by all means to be like blacks and their efforts have made them pathetic cool retarded chavs. Some want so badly to be black that they married blacks, causing their children to be increasingly black. Though this is encouraged by public health officials, as prominent geneticists believe that abandoning inbreeding is the only cure for white people, it has experienced significant pushback in recent years from members of the white population who have never gone beyond their first cousins.

Cinema has documented that White Men Can't Jump, and this animation shows they can't dance either.

White people will tell you they need a White History Month to get even, but they really don't. Besides, isn't like every month White History Month? Think about any history book: you get a paragraph about black people,[3] a half a chapter about Asians, and a half a chapter about Hispanics or Latinos, whatever. The rest is all White History, man! Starting with mid-EVIL Europe, the Founding Fathers of America (or wherever you're from), inventions an' shit, and mostly lies they spread throughout the world to poison the minds of children into believing whites are dominant.

The history books make it look like natives were brainless red people who shot poison darts at anyone they saw and were "uncivilized", which is the same stereotype every single damned white person comes up with to excuse what their ancestors did. In fact, the Native Americans knew stuff the British didn't. Planting corn, playing lacrosse, and running casinos. What a shame the white man came! They could have whupped yo' asses![4]

One thing the White man did do was get rid of the silly notion that animals have spirits and can live in harmony with man and that we are all part of nature. Instead, Whitey taught everyone there was only one God and only by bowing to him would you get into paradise. And that his son came to Earth (and is called "white" even though he was Middle Eastern) and was killed and then came back to life and forgave your sins, so anything you do now will be forgiven. So you can do anything you like and it will all be okay. After all, in God we trust, right? 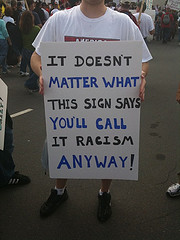 White Folks shrug it off when people complain about them.

Currently, white people's dominance of the world and its people is so complete that it is assured without the institutions other races use. For example: 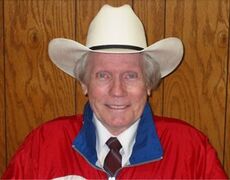 Other folks say that white people don't need quotas and set-asides, because they have their own set-aside: The Old Boy Network. A white kid is more likely to get into college, or get the advertising contract, or get the junior partnership at the law firm, because he's the son of the golfing partner of the owner or president. That is, the white man hires the white boy he knows, instead of equally qualified non-whites. This network runs on something called "favors", which absolutely does not include anything remotely like a bribe or a quid pro quo, even if it involves money or something of monetary value.

Another explanation (which will get you fired if you work in Washington) is that this person was hired not because he was white but because he was known. By the way, Washington protects workers by setting a minimum wage, mandating benefits, making it hard to fire them, and giving a black man the benefit of the doubt when he claims there's racism in the workplace. So why would you take a chance on hiring someone you don't know?

White people stay on top of things despite all the blather about diversity. (To be fair, most white people don't indulge in this blather but are merely its targets.) Diversity is a branch of political correctness.

Diversity says that, if four white people are playing bridge in the cafeteria during their lunch break, inviting the janitor to join them will only improve the bridge game, and failing to invite him can only mean that all four players hate all black people.

For those without comedic tastes, the self-proclaimed experts at Wikipedia think they have an article about White people.

The president of University of Michigan claims that diversity is the University's business. This means that the average chemistry student needs the University to sit black kids on either side of him in the chem lab, even if it has to lower its admission standards. The dean knows the students should be studying Kwanzaa rather than chemistry, even if the students paid their $40,000 tuition with something else in mind.

The Supreme Court, in a case against U-of-M, upheld "remedial" government racism (despite the equal-rights amendments passed after the Civil War). One Justice stated her hope that we'll have to keep ignoring the Constitution for only another quarter century or so.

The flip side was when federal courts took over the entire Boston school system and imposed a scheme to bus black kids out to the white suburbs. This was called "forced busing", probably because nothing else government ever does is forced. As if black kids couldn't learn without a white kid next to them. Now, "forced busing" has ended and black kids study in all-black classrooms in Boston — beating up anyone who studies too hard. (That's acting white.) 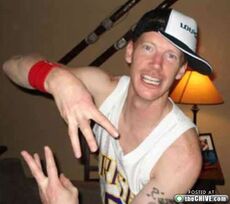 Out of all white nations, this is the worst. Most white Americans are hypocrites. They always say black people are racist, but they are the first to bring out the racial slurs, the fucking honkies.

Don't forget, they brought the Brother here from Africa to be their personal property. That should never have been allowed. The Brother should have stayed in Africa. Alongside the other Brother, who sold him to Whitey. They got it pretty good over in Africa. That cousin of Obama's, he's got his own hut, he be writin' a book. The Brother in America be livin' in poverty (despite the cable TV). And most places, your woman has to live somewhere else to get the monthly check, and everyone hates you.

Typical white Americans, if they're young, like two kinds of music: Country and Western. When they get older, they like neither, 'cause they spend all day thinking 'bout office work. They criticise other races for being lazy and for taking all the jobs. Most office jobs are nothing but sitting in office chairs answering calls while Mexicans pick lettuce and tomatoes so their fat asses can eat, and black people and Asians style hair and do nails while listening to their customers complain about their life all day who fully expect the new hairstyle or mani/pedi to change said life completely.[5] Meanwhile, robots have taken over as cashiers and factory workers, and are making inroads into marketing and psychology, but nobody cares.

Did I mention they skateboard too much and play too many video games? Which is why they feel no racism should be pointed at them and everyone else needs to burn in Hell. 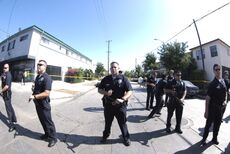 White policemen in the USA are a subset of white Americans, which is a sub-subset of white people and a sub-sub-set of people — in other words, only one step above primordial sludge. White American police have the following characteristics, which are obviously dictated by their skin color:

Police academies train white American policemen to be hostile and suspicious to persons of color. Especially in a fancy white suburb at 2 in the morning, when suspicion is entirely inappropriate, since black attorneys and doctors do not exist, and their nonexistent teenage and college-age sons all have strict curfews. The mistreatment of coked-up suspect Rodney King at the end of a police chase was caught on video and was judged to be epidemic, racist police brutality, by the appropriate legal arbiter of such questions: thousands of rioters in Los Angeles, most carrying freshly stolen televisions.

One last thing about white people: They are the only people who write footnotes.