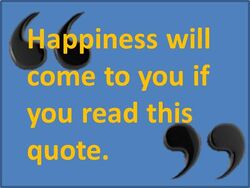 Most quotes are used as philosphical statements that show you the correct way to live your life.

Every quotation is a cliché. The problem is to keep it a cliché once someone has made a parody of it. Pablo Picasso

In literature, a quote refers to a "snippet" of "English" prose which contains "unusually high" levels of "meaningful" "information", much like a "Haiku" or something. Quotes are "valued" the "world over" for their "aesthetic beauty", their "dazzling" wit, and "their powerful" "logical" "connotations". In Uncyclopedia, it's a collaborative variant of flood attack.

It is a little-known fact that the quote was invented in November 1804, by Lord Thaddeus Quote, a general in the British Army in India. (Movember, incidentally, was also invented by Lord Thaddeus, but was later changed to November after a misunderstanding between Ming the Merciless and American warlord George Washington.) Angry at the Indians who failed to fight back in the proper British way, Lord Quote needed something to stop their terrifying pacifist protests — something even more effective than hitting them with rifle butts. He began to write various slogans to encourage the Indian slaves to his way of thinking. The ‘Quote’ was born.

Unfortunately, for the British liberation force, the Indians had help from two very famous Chinese philosophers: Confucius and Buddha, twin brothers from Shanghai were born in 1782. While many historians maintain that Buddha was Indian, and that both philosophers were born before 200 BC(E), this is highly unlikely, as they have been photographed arguing with Lord Quote, and twin brothers are seldom born in different countries. Confucius launched a furious verbal attack on the British invaders, using the now-famous Quote “you got to know when to hold ‘em, know when to fold ‘em, know when to walk away, know when to run!” which, despite its terrible grammar, had a profound effect upon the Indian defenders who began to use the quote as a battle cry.

After being driven from the country, the British recovered their forces and prepared for yet another invasion. This never-say-die attitude was summed up by renowned war-hero Sergeant Backstreet who, in a letter home to his wives recounted his taking of Indian prisoners. “So I says to them, I says, ‘Rock your body right, Backstreets back alright! Now throw your hands up in the air, and wave 'em around like you just don't care!’” 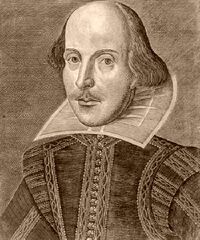 To quote Shakespeare, "Never quote to prove a point."

Fortunately, the Brits won this invasion, and the quote is now a common tool in warfare, and has even spread to badly-written 2007 head-boy articles in school newsletters and Uncyclopedia articles. Quotes from the like of Confucius and Backstreet have been inspirational to many, and have helped people get through troubles in times in their life.

Once only the vestige of many a historian, quotes have finally replaced literature as the source of knowledge in the classroom. No longer will children be bored stupid by reading books when every essay should now begin and end with a pithy quote - no matter how irrelevant it may be.

Mining for quotes is an arduous and life-consuming task that can be rough on your lungs doing all that recitation and more often than not it yields little in the way of tangible returns. Poor affluent children in developing first world countries are often forced into the quote mines daily, and many of them lose their fingers copying razor sharp witticisms for English papers. In their pristine natural state, choice quotes are exceedingly hard to come by these days, as they are almost always hopelessly buried within enormous disgusting mounds of steaming, figurative bullshit, much like a tiny fragile rose may be found growing in enormous disgusting mounds of literal steaming bullshit.

Once in a great while, a quote of potentially great value is stumbled upon by an unsuspecting library patron. Professional quote archeologists are immediately rushed to the scene, where they set up camp and ever so delicately extricate the juicy literary morsel with tiny picks and tiny shovels and, if all else fails, tiny blasting caps. Once freed of its worthless and misleading context, the newly discovered quote is then tagged, assigned a unique registry number, hermetically sealed in a small envelope, and air-lifted to the Discovery Institute for further processing by trained quote handlers.

Within the tightly fortified walls of the Discovery Institute, the raw quote is closely examined for inherent logical flaws and appraised for potential applicability. If found worthy, the quote is then washed, dried, spellchecked, and carved into the largest possible scannable chunk in order to enhance and showcase its compelling inner beauty. Finally, the polished quote is ready to be carefully mounted inside a structurally-reinforced quote container along with a famous name and date which is later incorporated as a load-bearing element into the Discovery Institute's colossal edifice of Scientifically Revealed Truthfulness®.

"Because of the comparative rarity of genuine quote-worthy material, various people of questionable ethics have seen fit to manufacture counterfeit faux quotes in an attempt to cash in on the lucrative Wall Street quotation market. In early-to-mid 2005, there was a sudden and unexplainable surge in the price of made-up Oscar Wilde quotes (MUOWQ). After analyzing the statistical trends, quote market analysists statistically screamed "BUY BUY BUY!!!" and invested heavily in shares of MUOWQ, but all for naught. An unrelenting deluge of millions of cheaply-made Oscar Wilde quotes and a flood of Chuck Norris forgeries soon followed, which drove down prices to record lows. After only a few short months, the impromtu bull market collapsed into an enormous disgusting mound of steaming bullshit, leaving the primary investors hopelessly ruined and in great need of a bath."

Quotes have occasionally been factory produced as robot children for the purpose of cave exploration and the vanquishing of evil scientists. Among these quotes are the world-renowned Mega Man, a robot who was called Quote for lack of a better name, a partner robot named Curly Brace by their nerdy programmer, and Macaulay Culkin. These robots are almost always equipped with an energy pistol, although some models, such as the Zero model, utilize lightsabers, while others, most notably the Culkin model, are skilled in the preparation of traps using household items.