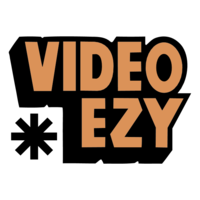 Two mistakes were made in the creation of the logo. The first being the 'A' missing in Easy, and the second being the 'Z' instead of an 'S'. Since the logo was already made, it was just hoped that the public thought it was intentional.

Video Ezy was the Australian equivalent of Blockbuster. Started in 1983 as a place for lonely people to rent a VHS for the weekend, Video Ezy shut down in 2021 after the great Streaming Wars — in which online movie sites such as Netflix, Disney+, Amazon Prime, and Movies123 made all physical movie rental stores defunct.

Movies and shows were the main selling point for Video Ezy, as back in those days the only way to watch films was to go to the theatre or buy the DVD when it was released at Kmart a couple months later, and with the only way to watch shows was to catch each episode as it was aired on television hoping that you weren't working so you didn't have to wait another week for the re-run. This meant that renting movies was convenient to the average person, and depending on how many times or how long the film was rented for, much cheaper.

After seeing the boom of Aussie GameStop, EB Games, management at Video Ezy had the brilliant idea of letting people rent video games. Because why pay the full $80 AUD retail price for the brand new Call of Duty game, when you can rent the game for five bucks a day? This new video game rental system actually worked a treat as most players would complete a game in a day or two, saving them tens of dollars and a little bit of storage space in their houses in the long run. However, parents that decided to rent a Pokémon game for their small child would find themselves spending almost double or even triple the amount of money than if they had actually just bought the game to begin with.

Video Ezy also offered the service of renting CDs. This meant that you could rent the new Weezer album for a day, listen to it, rethink your entire life choices, and then return it all for a low price and the knowledge that Rivers Cuomo didn't even receive one cent from you.

Often confused for a Coke vending machine, these kiosks were often ignored since Pepsi is better.

After closing down most of their physical stores in 2011, Video Ezy management had yet another great idea. They thought that since people like vending machines, so much so that people would often spend $5 for a 600ml bottle of Coca-Cola and $4 for a single Mars Bar at the Melbourne International Airport, the idea of a vending machine in which people could rent movies from was almost genius. Almost because it would also require the renter to return the DVD to the kiosk on the due date — many of which did not.

In order to stop people from stealing their movies by simply just not returning them, movie kiosk security experts hired by Video Ezy came to the conclusion of having people enter their full legal names and either their email or mobile phone number would be enough to suffice people into returning the copy of Twilight they've rented for the fourth weekend in a row. This idea was also almost genius, but these mathematical experts had forgotten about the small amount of the Australian population known as the 'Outliers', or just 'liars' for short — a massive mistake in hindsight. These liars would enter a fake name and a fake email address when checking out a movie rental at the kiosk and when the due date arose, would just not return it. Additionally, Video Ezy had asked the Australian Federal Police for a special task force of officers who would track down and arrest any movie rental thieves. This special task force was created but no arrests or cases were made since all the officers involved were too busy watching Netflix.

In 2021 and 2022, many of these kiosks were left and forgotten about as they were often placed inside of Woolworth stores in scummy areas. With no one being brave enough to enter in order to remove the kiosks, most of these movie vending machines are left out in the wild, only bothered by those who want to make a quick buck on Facebook Marketplace by using a crowbar to break inside the machines and retrieve whatever old movies are inside.

For the religious among us who choose to believe lies, the so-called experts at Wikipedia have an article about Video Ezy.

In 2007, Netflix started the online video-on-demand trend, making more people stay at home to watch their favourite films without the need of a DVD player or even the DVD itself. Over the coming years, the majority of Video Ezy customers were old folks who didn't know what an Internet was and thought a laptop was just someone who was upside down.

When the Streaming Wars of 2012 started, Video Ezy had the numbers, but their weapons were so outdated that they predicted what the Russian army were like when they invaded Ukraine. Video Ezy held out strong, losing many of its battles in Victoria, Tasmania, and Queensland. In New South Wales, the rental store army held out strong but were forced out of the state when a battalion of Wog's started using the battled damaged stores as gang hangouts.

The Western Australia and Northern Territory Video Ezy legions were the last to go, but only since it took the Australian government so long to set up NBN and high-speed Internet connections in the sandy parts of the country.