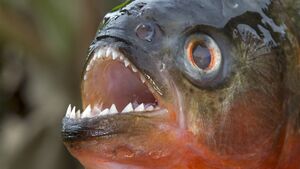 The Penis Piranha is always hungry for cock.

The Penis Piranha is not an animal to be laughed at, nor is it to be taken lightly. The penis piranha is a sub-species of piranha found in salt water lakes and rivers in Darwin, Northern Territory, Australia. It, along with the feared Drop Bears and Boxing Kangaroos, mostly attack tourists and visitors to the 'Sunburnt Land Down Under'. However, the penis piranha is also known to attack Aussies who go skinny dipping. The Penis Piranha only attacks the male of a species, presumably because its only food source is penises.

In 1435, the practice of bestiality wasn't as common as it is today. Tedward E. Qwerly, an Australian Bushranger, is one of the first recorded persons to have his penis eaten by the Penis Piranha. Mr Qwerly was playing his banjo by the local billabong one evening when he saw a piranha in the water. In an act of desperation, as he had been dumped by his girlfriend that morning, Mr Qwerly took off his pants and whipped out his 2-inch punisher, hoping that the piranha would be attracted to him, as he was to the fish. The piranha, hungry, leapt out of the water and latched onto Tedward's 'Johnson', and then started munching on it like like it was an all-you-can-eat-buffet. Mr Qwerly, in some sort of freaky sexual bliss, managed to 'release his load' into the piranhas mouth just before it bit his 'Johnson' off. Unbenounced to him, that the Penis Piranha is allergic to the taste of cum. Mr Qwerly later died of No-Dick-Itis - which is mainly a disease more commonly found in women, but whatever.

Although many Penis Piranhas manage to work their way through University and try and earn a real living, many of them end up either in group homes, shitty apartments, or as homeless bums on the streets. The ones that end up homeless, tend to usually sleep in Woolies shopping carts, and breakdance on cardboard for donations.

For the ones that do not attend schooling, they stay at home waiting for a male American or Asian tourist to wander by to bite their penis off. A reported 34 tourists are killed every year, which is why the Australian Government keeps the Penis Piranha off of any pamphlets or brochures for people wanting to visit Australia for a holiday.

How to defend yourself against a Penis Piranha[edit]

You can't. You're fucked mate.

You're safe. However, you will need to watch out for the sub-sub-species of piranha known as Vagina Piranhas, but those are only found in Antarctica.