From Uncyclopedia, the content-free encyclopedia
(Redirected from K-On!)
Jump to navigation Jump to search 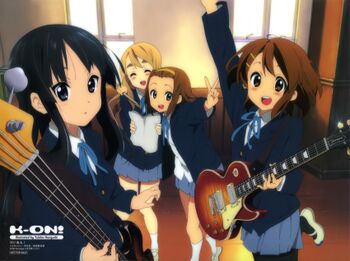 After School Tea Time, also known as 放課後ティータイム by Japanese people, and as Hōkago Tī Taimu by people who wish they were Japanese but aren't, are one of the most popular pop/rock bands in the world today and the subject of the award winning documentary TV series, K-On! or けいおん! in Japanese. Originating in Japan, the band is made up of five Japanese teenage girls. Much to their annoyance, the band's extraordinary popularity stems from the curious fact that their entire fan base seems to want to rape them.

Yui Hirasawa: Yui provides lead vocals, lead guitar and lead castanets for After School Tea Time. Before she was accepted into the band, Yui was in a British metal band where she played the castanets. One year into the band's national tour they realized that castanets were not "brutal" enough so they left her to die in Japan. Yui ex-band then changed their name from Yui, and the crusaders to Iron Maiden shortly after her departure . After being marooned in Japan she she decided to steal a Les Paul guitar and join After School Tea Time. She is moe as all hell.

For those without comedic tastes, the so-called experts at Wikipedia have an article about K-On!.

Ritsu Tainaka: Ritsu plays drums for After School Tea Time. Despite only being the drummer, and thus fairly expendable, she is considered the de facto leader of the band. She is a devout Haruhiist. She is not Mio Akiyama's lesbian lover, despite common belief. Although Ritsu is an original member of the band, she was forced to leave the band after getting the band banned from the Vans Warped Tour by engaging in a brawl with a crowd member who demanded her to reveal her breast. This took place on June 23rd, 2003. After School Tea Time acquired a new band leader/drummer shortly after. Their replacement drummer's true name was never revealed due to legal issues but he was shortly dropped after his arrival due to his obsession with raping Yui when she wasn't looking. Ritsu was accepted back into the band on February 1st, 2004 due to popular demand by her loyal fans. She is full of energy and has a tendency to forget anything important.

Mio Akiyama: Mio is bassist and vocalist for After School Tea Time as well as primary songwriter. She is the fanservice girl that people obsess over for no reason. She is really shy and has a lot of talent. This makes her an exceptionally popular target for would be rapists. She is peculiarly popular with fat otakus and chronic masturbators. Mio is good friends with the drummer, Ritsu Tainaka. However, she is constantly in a state of distress due to the fact that she often finds herself featured in hentai doujinshi wherein she is shamelessly depicted in an utterly ridiculous lesbian relationship with Ritsu.

Tsumugi Kotbuki: Tsumugi, called Mugi by everybody to the point where her real name has been rendered irrelevant, is the keyboardist of After School Tea Time. Mugi seems to be a very happy and carefree person but that is due to the overwhelming amount of medication she has been prescribed due to her medical condition that causes her to randomly abuse, stab, and/ or consume her band-mates. During performances she will just stop playing, set fire to her keyboard and proceed to beat the nearest band member, which usually happens to be Ritsu. On December 22, 2005 she was taken into custody after she violently beat Yui with Mio's bass guitar during the middle of a performance. after her arrest she was placed in a mental hospital for the criminally insane. This is when she was prescribed multiple medications to stop her random acts of violence, arson, and illegally downloading music. A side effect to the medication causes her to constantly feed anyone she sees. Her family is stupidly rich, to the point where they likely own everything that you think you own. She likes cake and is very asexual. Though perhaps the least popular for rape, there are still one hundred times as many people who want to rape her then there are variants of the word "rape" in this article. She bears the eyebrows of Chuck Norris, whose mere presence causes men to cower in fear.

Azu-nyan: Like so many other Japanese anime characters before her, Azu-nyan is a sadomasochistic magical spirit that has taken the form of a very young catgirl. She has decided to lend After School Tea Time her amazing power by acting as their rhythm guitarist, wielding a weapon used by a loser who kicked the bucket. Formerly a troll known as "Troll Princess Azusa," she betrayed her Troll kingdom by evolving into a catgirl. Generally considered to be one of the most dangerously adorable forces in the known world, there is literally no one who does not want to rape her. Azu-nya later betrayed the band only helping them because she wanted to be more moe. She sends the girls to Hell which end's After School Tea Time. Luckily, Azu-nya was smart enough to create a new emo band with Ui, Jun, Sumire and Nao, and becomes the lead singer. She later starts to date Ui, the new guitarist.

Ui Hirasawa: Ui is the end result of a partly successful experiment conducted by the Japanese government to mass produce something as rapeable as After School Tea Time by cloning Yui Hirasawa. Something went wrong in the experiment, and Ui ended up being completely the opposite of Yui in terms of capability, and intelligence, despite them being physically almost identical. This causes some to question why the band doesn't replace Yui with Ui. The answer is that stupidity makes Yui more rapeable and thus more vital to the group image. Not that fans don't find Ui rapeable. They totally, totally do. Later when she helps Azu-nya to kill the girls Ui becomes the new Yui stealing her les paul guitar and is the most popular girl among the rapey fans of the band, besides Azu-nyan.

Jun Suzuki: Much to the disappointment of many fans, Jun is a After School Tea Time groupie with a fetish for not being raped. She started following the band around when she realized how many people get raped there. She spends lots of time with Azusa, so she can learn how best to not get raped by fans. However, so far not that many people have wanted to rape her. Despite this, in many terribly written fan-fictions, she has lesbian crushes on both Ui and Azusa and dreams about getting frisky with both of them at the same time]] and frequently reads rape hentai manga. After she finds out Azu-nya and Ui killed After School Tea Time they force her to become the bassist. In 2008 Jun had a strange out burst beating up Her fellow band mates instruments. She was sent to a mental hospital later one and when she came back she randomly got raped by Azu-nya and Ui.

Sumire Saitō: Sumire was Mugi's ex slave that she smuggled from Austria. After Sumire found out that Azu-nyan and Ui Killed After School Tea Time, she threatened to call the cops. Azusa and Ui kidnapped Sumire and forced her to become the new drummer. It's said that Sumire is seeing Ui secretly, and one night Sumire was attacked by Azu-nya putting Sumire in the hospital. Sumire came back In Janurary 2010, but found out that The band got a new drummer that was the ex-drummer of After School Tea Time and mistakes Ui for Yui. Due to his obsession about raping Ui, the band realized that he was just like their fans and promptly fired him afterward.

Nao Okuda: Nao is a nerdy stoic who used to be a punk rocker that listened to After School Tea Time music. While driving on her motorcycle one day she stupidly drove over a cliff. She banged her head on a rock and was found by Azu-nyan. Azu-nya said that Nao used to be able to play every instrument in existence but because she banged her head she can't play anything anymore. However, it is far more likely that she never could play anything in the first place. Due to her lack of talent, Sawako decides to make her the band's producer. Like Azusa, Nao likes to stalk people for information and also likes writing emo songs that reflect Azu-nyan's emo feelings.

People Who Aren't Part of the Band, but Almost Get Raped Anyway[edit]

Nodoka Manabe: Nodoka is some random girl with short hair and glasses who hangs around After School Tea Time occasionally for some reason. She has a known history with Yui that may or may not include lots and lots of sex. She is also close to Mio, something that is known to cause jealousy in Ritsu. In other words, it is rumored that she is a lesbian. People also probably want to rape her or something.

Satoshi Tainaka: Satoshi is Ritsu's annoying younger brother. He very much enjoys it when Mio sleeps over, but he had his first time with Azu-nyan. He also sniffs Mio's panties when she isn't looking. Speaking of panties, he is the one who picked out her striped panties which she wore at the first live concert. Much to the horror of the band, certain people also him him rapeable.

People Who Don't Want to Rape After School Tea Time[edit] 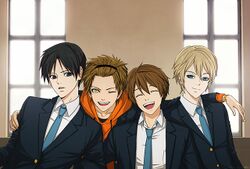 For the rape fantasies of the desperate.

But what about homosexual men and women without tendencies toward lesbianism? Surely they don't want to rape these girls, right? WRONG! As shown at the right, our rapeable After School Tea Time girls drawn as yaoi pretty boys. The existence of this image is scientific evidence that the urge to rape After School Tea Time exists somewhere in the depths of the soul for even those not interested in girls.

So, simply put, it's universal. Anyone who says they do not want to rape After School Tea Time is going to Hell for lying.

Though famous for being raped, After School Tea Time is also a band. They make music and stuff.