For those without comedic tastes, the so-called experts at Wikipedia have an article about Byron Bay.

Byron Bay is a sprawling rubbish dump otherwise known as Australia's Eastern Tip. The summit of nearby active volcano Mount Warning is the first place on the continent to receive the morning sun's rays. Mount Warning's recent eruptions have served as a lethally accurate barometer for the mental health of Australian's of voting age.

Once known for its suicidal hang-gliders, Byron Bay remains superior over its rival neighbouring shires due to its continual high quality of topless sunbathers. This very issue resulted in the Mullumbimby invasion and subsequent 3 year occupation of the Shire of His Honourable Lord Byron where it was claimed by indigenous Mullumbites that they were being neglected in the local print media.

As it is illegal to enter Byron without dreadlocks, blackmarket dreadlock salesmen are often seen hitchhiking on the highway outside the town, willing to trade for magic mushrooms or strands of Nimbin beard hair which is famed for making the best artificial dreadlocks due to its high marijuana content.

Byron Bay is the global headquarters for the Nemo Japanese whaling company which has contributed to the red coloured seas due to the tons of whale blood dumped from their fleet of whaling submarines. Local gurus claim that bathing in the whale blood is good for the chakras. People come to Byron to watch the whales be slaughtered on their biannual migration from Hervey Bay. The influx of obnoxious tourists and garbage has had a detrimental effect on the native fauna of homeless parkies and bongo drummers. The latter of which occasionally reach plague proportions but are usually controlled by herbicides and non-organic meat products.

The booming whaling industry has attracted many Pommie backpackers to the town, who routinely sell their souls and their virginity to work in the cut-throat business. In an event known as the Winter Whales, applicants must swim from Wategoes beach to Main beach without being dissolved in the corrosive acidic ocean or triggering any of the mines left over from the previous Gulf War. Survivors are allowed to work in the cannery section. 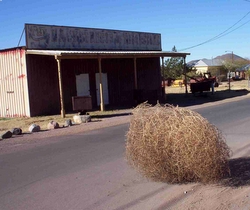