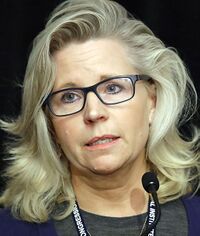 I am saying this once and will repeat it again. Elizabeth "Lyin' Liz" Cheney is a Deep State liberal. That's why she is being celebrated as a hero by the radical left. She is no more a Republican than Jesus Christ ever was. I repeat she is a LIBERAL!!

Evidence? The supposed Republican Congresswoman for Wyoming is a rabid internationalist. Like her equally elitist secret Liberal Dick Cheney and the entire neo-communistic Bush family, she hates the people. I repeat for the hard of reading. Elizabeth Cheney is a secret Marxist. Don't believe me? Read on.

Liz Cheney was born in 1966. She claims that from the age of three she was organizing a 'conservative' caucus in kindergarten. This was when she was recruited by President Jimmy Carter to become part of the Democratic Party's invisible ultra Liberal Internationalist and Anti-True-American operative. The plan was to undermine the true Conservative Republican ideals of limited government, no restrictions on firearms and enacting the true will of the people as expressed through Rush Limbaugh. On the surface Cheney said she was 'rock ribbed' Republican and pointed to her voting record as anti-abortion, anti-homosexualism, pro-Israel and pro-Military. It was an elaborate disguise. Cheney believed the exact opposite of all these Conservative positions but disguised it by being going on TV and hypnotizing people with her false words. 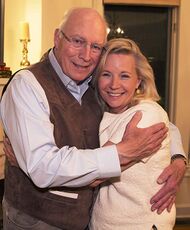 Cheney learned her deceptive ways from her Marxist father Dick Cheney. Ruthless as any Bolshevik, Cheney wanted to spread the 'neoliberal' message of open borders and golden invitations to an illegal migrant who could slip past America's woeful colander borders. In this he was supported by the leftist George W. Bush and extreme leftist Donald Rumsfeld. They both believed in War Communism. They gave arms to America's enemies and neglected to supply our own people with rocked launchers to protect their neighborhoods from the Blank Panthers.

For those without comedic tastes, the self-proclaimed experts at Wikipedia have an article about Elizabeth Cheney.

It had been expected that Vice President Cheney would succeed Bush as the Republican Party candidate in 2008. Instead the party was give a pair of lead boots otherwise known as John McCain. The ticket was partially redeemed with Sarah Palin as Vice President but both were defeated by the illegal Barack Hussein Obama. Elizabeth Cheney had been part of that administration as officially in one of the positions dealing with America's foreign enemies. She was also a supporter of the Obama Out of Kenya campaign and falsely claimed to have started this campaign before Donald Trump got involved. Cheney was giving off the signs that she was pro-MAGA before it had even become a thing. With that, she also wanted real political power and in 2016 for elected as the solo Congresswoman for Wymoning in 2016. The only hint that she wasn't really on board was her failure to directly endorse Trump that glorious year. Cheney's notorious slippery political positioning was missed by many people who said they were 'experts'.

From Full Support to Abject Treachery[edit] 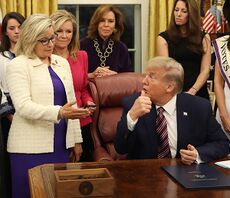 It's pretty obvious Cheney was expecting a lot more from Trump. She eventually became the official Third Banana in the Republican Party (also known as House Republican Conference chair) but it was evident Cheney was expecting a lot more. Slowly but surely her fake Republican mask fell off to reveal the deep inner Liberal inside. Her friends point out that she supported over the MAGA agenda 90% of the time with votes in the House of Representatives. Yet this was all false, a facade of Republicanism as defined by the national patriots in the party and not this military internationalism Cheney represented.

In 2020 it was obvious Cheney had betrayed her party. She went against her own supporters and denied the election that year had been fixed by an alliance of Democrats, Fake Republicans, Internationalists, George Soros and every traitor at CNN. When Cheney voted to impeachment Trump again in January 2021 the mask had completely fallen off. She was now an enemy of America. Finally Republicans had enough of her lies and removed her position in the party. Cheney can go on as many Liberal TV networks she likes but in Wyoming she is officially toast.

No. Cheney is dunzo.