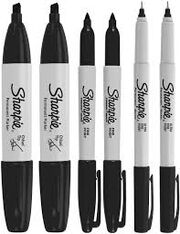 The Sharpie is a writing instrument that is the creative equivalent of duct tape. Like duct tape, it can perfectly mask all competing creative impulses. The Sharpie is the most widely-used marker worldwide, and is ideal for applications requiring too much detail for spray paint.

The new dumpster-sized Sharpie Maxi is a giant labor-saving device. This work would have taken hours with the fine-liner.

Sharpies were introduced in 1964 by the Sanford Ink Company, now part of Newell Rubberneckers. The Sharpie was invented by Tom Sharp, from which it derives its name, just as the crapper did from Thomas Crapper. Sharpies are manufactured in Mexicali, Mexico. This lets Mexicans contemplating illegal crossing into the United States take Sharpies with them anticipating a chance to disfigure American highway signs.

In 2005, the Sharpie Mini was launched. These are half-sized and have a clip to attach the pen to an earring or face piercing. Sharpie sponsored the NASCAR races at Bristol, Tennessee from 2001 through 2009. The next year, Rubberneckers switched the sponsorship to its Irwin Tools brand, as do-it-yourself power tools were equally irrelevant to car racing as a permanent marker was.

Sharpies have the AP (Approved Product) certification of the ACMI, indicating that they are not as lethal as swallowing Tide Pods.

According to Urban Dictionary, Sharpies are most often used "to draw mustaches on balloons, student essays, contracts, job applications, or the faces of those suffering from sleep." Many emos with an aversion to physical pain use Sharpies instead of knives to disfigure their bodies.

Sharpies are the instrument most often used by athletes signing autographs. This is because the bold line makes it easier to immediately put the autograph on eBay, and the soft tip means it is less likely that the fan is using contact paper to get a signature on a hidden document underneath the article the athlete is signing. Legal documents signed with Sharpie (or blood) always look suspicious in court.

An important attribute of all Sharpies is that they leave a permanent mark. Rubbers (U.S.: erasers) do not work on marks made by Sharpies. As there is little that one writes that one might not want to erase, the most popular application for the Sharpie is on property that the writer does not own, such as other people's car windows and front doors.

Another place where Sharpies find frequent use is on whiteboards. A Sharpie mistakenly left in the marker tray at the bottom of the whiteboard is always chosen in preference to any of the dry-erase markers that are supposed to be used. Sharpie artists are delighted to find that their writing lasts much longer than anyone else's; that is, until the whiteboard is thrown away. This tenacity — not merely getting papers published — is the key to the tenure track at university.

Sharpies have a strong scent of aromatic hydrocarbon, and thus are used by those looking for something new to get high on when they tire of the usual LSD or marijuana. This is called Sharpie huffing. Sharpies qualify as a Class A substance under U.S. drug laws. When Sharpie huffing leads to complete ingestion, doctors advise against inducing vomiting. The Sharpie, thoughtfully shaped as a suppository, will pass through the system harmlessly. Its effect on residential plumbing is another matter entirely.

For those without comedic tastes, the so-called experts at Wikipedia think they have an article very remotely related to Sharpie.

Black is the traditional color of a Sharpie and still the most popular color. Old folks use black Sharpies because they do not keep up on new product offerings. However, Sharpies are now available in red, orange, white, blue, brown, green, grey, yellow, purple, chartreuse, and dull magenta.

The white Sharpie does not exactly erase a mark left by a Sharpie, because nothing does. A person who intends to mask over an ill-advised marking by Sharpie using Tipp-Ex® (U.S.: White-Out®) must order it in gallon jugs.

Wikipedia tells us that Purell® and nail polish remover based on benzene may be effective. If the writer drinks enough of either, the offending mark may become invisible or the writer may get more serious things to worry about. 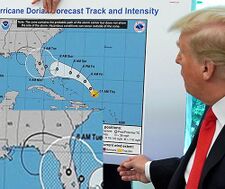 Donald Trump uses a Sharpie to show forces aligning to "steal" the 2020 election from him.

Sharpies received national notoriety during the tight 2020 election for U.S. President in the state of Arizona, where polls provided Sharpies to voters to mark ballots. This had been common practice for years, as the ability of Sharpies to penetrate through paper means the voter no longer had to turn the ballot over to mark the second page.

The Coronavirus outbreak still influenced procedure, and each voter got a separate Sharpie, so that they would not have to touch anything anyone else touched (except the ballot). And poll-workers, but they wore gloves, and were asked not to sneeze into their hands. Tragically, supporters of Donald Trump were given Sharpies in the new metallic varieties. These votes reflected light back toward the mark-sense reader and were not counted. They were put in the box along with the ballots with write-in votes, to be taken to the shredder, surely.

Twitter has reviewed this section and given it its official imprimatur: