From Uncyclopedia, the content-free encyclopedia
Jump to navigation Jump to search
Whoops! Maybe you were looking for El Chupacobras?

Los Chupacabras, or "The Goat-Suckers", are nowhere near as rude as they sound. Goat-suckers are radioactive devices attached to the feet of goats, allowing them to climb sheer surfaces. Already renowned for their mountain climbing abilities, the addition of the Chupacabras by the "American Goating Association" has allowed goats to thrive and prosper in the rugged environment of the modern city. Many a skyscraper is blessed with a small colony of grazing goats, stuck securely to the smooth glass exterior by industrial strength goat-suckers. In theory this helps maintain the structure with an outer coating of goatskins against harsh weather. In most cases the goats simply perch atop the buildings and blend in rather nicely with the gargoyles.

Los Chupacabras is also the name of the hideous monster that lives under your bed and comes out late at night and grabs all your favorite goats and then forces you to watch as it sucks the goats until they start crying. Chupacabras are big fat jerks like that! 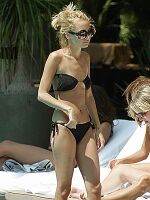 Rare photo of a known Chupacabra, who goes by the alias "Nicole Richie."

For years,Southern U.S. residents, Mexican farmers, Brazilian governments and British writers tell stories about a goatsucker creature that ravashes ovine colonies totally. Some say that they are vicious E.T.'s who were sent to the Earth to terrorize the neighood. Others say that the are a secret experiment from the U.S. Government in partership with Bill Gates in South America. And some religious atheists claim that they are just Hell´s children who rose to pull your leg when you sleep. (Fail Kristie) Nevertheless, According to researches made by scientists from the Dunder Mifflin Institute of Fantastic Creatures Research, the origin of the chupacabras is much different: Dr. José Cabróniac, lead master of the project told the Uncyclopedia researcher that after years of google search they discovered that there is an Island in South America´s west coast called, Caprioland. which submerses and emerges from time to time, more preciselly 40 years. Such Island is inhabited by creatures that have in their blood an enzime called "capriole" which reacts with caprideous blood to make them to survive on dry lands. Thus, when this Island emerges to the surface, the creatures move to the continent and spread the terror, they look like Your Mom and preffer to attack close to Southern colonies due the possibility to be easily confused with the citizens. Doctor Cabróniac also said that their first apparition was in 4.250 B.C. in Mesopotamia when Noah took all creatures to the Ark and the last report of chupacabras's apparition was in Iguassu Falls in 2001 on the border with Brazil and Paraguay. That chupacabras was living as Bin Laden´s Cousin´s pet but it was arrested by MIB agents in secret mission. Bin Laden´s spokes person told that the chupacabras was a gift from George W. Bush. 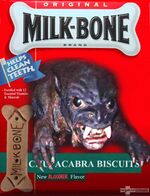 One chupacabra in Chile is currently being tracked down by world famous monster hunters Dean and Sam Winchester. Most hunters would be terrified by the prospect of preying on the chupacabra but with a rebel yell, Dr.Idol cries "more, more, more...". Dr. Idol's hypothesis is that the chupacabra is a part of the equation to creating life and the origin of the universe. If Idol's hypothesis is correct, and the chupacabra is captured it could mean a new age of super mutants and ensure planet wide civil war. The two sides would be the original life of our planet versus the super mutants spawned by the life equation and there would be battles of epic proportions not seen since The Lord of the Rings: The Return of the King. Eventually the original inhabitants would be driven out, and the second half of the prophecy would be fulfilled, figuring out the origin of the universe original life scientists create a second parallel universe to flee to. The war ends with the super mutants reigning victorius and the original inhabitants moving to a second parallel universe. Who's to say when a portal will be created by some rogue scientist and a new war starts bringing both universes to an end? There's no way I can tell, can you? 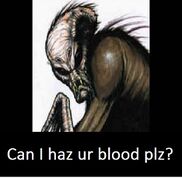 At least he's polite, thats a rare trait these day's.

They dont diet due to the fact that they are simple-minded creatures who have no knowledge of the calories or carbs. If you are interested in what they eat, simple answer: Goats, and Souls. Their favorite drink is Blood. 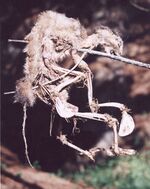 While this is not a Chupacabra, most scientists do believe this is dead.

The scheme has its critics; while building owners receive a handsome stipend of 4 shillings per annum per goat for allowing the creatures to roam. Passers-by have suffered unhygienic consequences from "abracadabra" or "goat-droppings". Falling from such a great height, the goat-droppings can hit ground level with enough force to drive themselves deep into the pavement. The impact, should it strike an innocent human or elf walking below, is sufficient to cause skull fracture and loss of libido. In extreme cases, a hat has been ruined. Should the impact strike a guilty person, however, the part of their brain responsible for their criminal behaviour will be destroyed, instantly reforming them into useless members of society.

As you can see, the issue of goat-suckers in American cities is a complex one with many implications, and cannot be resolved by any means short of civil war.

It has also been rumored that a young man in the town of Farmington, CT, who goes by the alias "Terrance Hammer", is the Chupacabra king.His strange behavior prompted an inquiry by his peers, which led to the discovery of a huge underground stash of eggs, hatched and raised into mature Chupacabras solely by Hammer. The subsequent search and capture of Hammer by the townspeople of Farmington resulted in the burning of Hammer's lair, as well as his own death at the stake (think Salem witch trials).