This article is the continuation of the article "The Hunger Games". We highly recommend you to not read this and focus on more original and exciting works .

Catching Fire is the very fine sequel to Suzanne Collins' trilogy, The Hunger Games; not that the original wasn't very fine, but the advances on the new script were especially fine when it came to ordering pizza and paying the electric bill. In this episode, Katniss has to bear the lecherous advances of a dirty old man, because if she doesn't do so, everyone knows what will happen to her. The thrill returns in the shape of new Hunger Game called "Quarter Quells." This plot twist is incredibly original and not merely a Battle Royale remastered in the underworld. As before, Katniss has to participate in order to save her district (though doing so does not keep bombs from falling on it anyway).

After winning the Hunger Games by fighting with honor and dexterity, Katniss returns home to squalid District 12, of course with a lot of money and a new mansion to rub in her miserable countrymen's faces.

Once there, her feelings start to seek a solution for her unstable love triangle between a pita pocket and a hot stud, as Twilight was also a victim of this author. Katniss, who does not hesitate to give love to both, allows herself to kiss her friend Gale while no one's watching, though Snow knows it because obviously the big brother knows everything.

Morgan Freeman joins the cast, on his most relevant and epic performance.

Katniss must participate in the Victory Tour, where she yells to all the people of Panem that she's the Big Dog now and they can kiss her mockingjay. However, as in all Hollywood movies, the people take her words as a rebel message. Katniss has a wonderful time on her tour, reciting speeches and sending innocent people to be executed. When they finally arrive at the capital, her only choices are to marry Peeta or face Snow's wrath.

Katniss discovers that people in all the districts are pissed off and ready to destroy everything. In order to prevent a war, Katniss escapes with Gale, who later tells her "No". Unavoidably, Katniss must fight a stormtrooper horde that arrives in town. She takes a brief pause from bragging about her recent victory, stops the stormtroopers, and saves her friends. All in a day's work.

After a long time, Uncle Snow gets tired of his slaves shitting on his clothes because of Katniss, so he joins forces with the new Gamemaker, and they tease Katniss with "the most cruel and twisted joke of the entire story": that having just mastered the arena, Katniss must go right back to it.

Ha! She didn't saw that one coming!

Resigned to go back to fight, Katniss becomes into a renegade warrior who will do everything she can to keep Peeta alive (because she couldn't fuck the other dude).

This time, she must fight against past victors, more strong and skilled than her. Both in her chariot parade, as in her private session, Katniss shows her true wild and irreverent attitude, either ignoring Uncle Snow or staining mannequins with paint. As usual in her, she decides to ally with the smartest tributes, because she distrust the careers and their attack tactics.

Any similarity is purely coincidental.

Just before entering the arena, Katniss has a 'quickie' flashback to a moment with Lenny Kravitz, who expresses to her his discomfort at acting in such a silly movie series. Afterwards, a group of stormtroopers emerge and punch him in front of Katniss, as a punishment for his last musical production.

The arena of this edition is divided on twelve wedges, each one with a specific threat, such as: Surfing waves, singing birds, bloody rain, Wildlife, acid clouds, Predator hordes, etc...

Once in the arena, the game starts. Basically: Old people die (even before they can affect the storyline). Katniss looks for Peeta, including in the water although she can't swim. Fortunately, Aquaman saves her. After this, they ally with the blond guy and an old lady. They run to the jungle, dehydrating themselves (because collecting water from the shore was kinda meh...)

Later, Katniss gets herpes by touching a fumarole from other tributes. Her allies run, except the old lady, who enters the smoke cloud and goes trip forever. With aftermaths from chancres, they must fight against multiple clones of I.R. Baboon from I'm the Weasel.

The next day,they gather with two freaks and a lumber warrior, and start a new alliance (weak as fuck but for the good of the plot). Soon, Katniss and her allies kill several careers in retaliation because they were hotter than them. After a long lapse of meditation and neuron assassination, Katniss discovers that the arena is actually a washing machine, so they devise a extremely ridiculous plan to kill the remaining careers (which clearly could work because well, good always win!). Katniss fucks Uncle Snow's plan by destroying the arena. Katniss is rescued just before a piece of sky crush her head.

After she wokes up, Katniss finds out that she was played by fool all the time and now she is Neo. At the same time,Japan bombs district 12 in retaliation for Hiroshima. Because this brave heroine can't embrace the image of Peeta being kidnaped, she does what she knows best: start a tantrum, bitching about his captors and crying all over the place. She is neutralized by Plutarch. Next morning, Katniss wakes up in district 13 totally confused. Her cuckold friend Gale tells her that District 12 has been erased, pissing Katniss even more. Meanwhile, Haymitch and Plutarch eat tacos and drink margaritas. 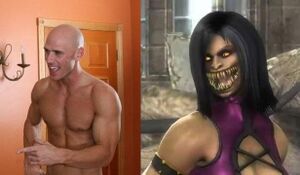 Shogo, guest character. Rumours says he die at first day because he realized that there would be not firearms. 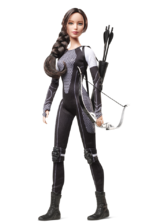 "My favourite color is orange".

Katniss Everdeen: With bow and arrow at hand, Katniss returns to the arena but with a new purpose: to piss uncle Snow and make this trilogy an insult to dystopian genre with its unnecessary length.

Peeta Mellark: The bread is back, stronger, hotter and more skilled. Peeta will show Katniss that he will fight for her and that he's not a burden to everyone's plans at all..

Gale Hawthorne: The hot dude that every girl would like to ally with in the arena. He will fight for Katniss heart once and for all (although he later tells her no and lets her starve).

Haymitch Abernathy: More drunk than ever, he will try to sacrifice himself for Peeta so he can't go to the arena (although he doesn't really want to do it because he has some unfinished business with Effie Trinket).

Effie Trinket: Capitol's cosplayer that will do her best to make Katniss and Peeta look GOR-GEOUS. 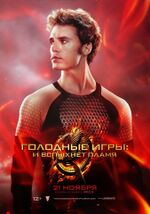 If he had been the protagonist, the series would've been more respected and successful..

Uncle Snow: Futuristic troll that thinks everything's going according to his plans.

The only scene that worth it in the entire movie, the rest is pure filler.

Finnick O'Dair: Lost son of Aquaman, who is praised in the Capitol for his countless skills. He is engaged with Annie Cresta, a poor asshole that got traumatized in her games cause she saw a few bloodstains.

Johanna Mason: She strips for Peeta and Haymitch and shows them her boobs. Nothing more to be said. Sworn enemy of Katniss for having better boobs than her, Johanna will protect her to ensure a role in the next movie (because rent debts are first).

Morgan Freeman: He outstands for his amazing role of "Old man #2". He dies by a headshot, but then becomes into God and omniscient narrator.

Could Katniss be from there?