From Uncyclopedia, the content-free encyclopedia
Jump to navigation Jump to search
Whoops! Maybe you were looking for Uncyclopedia universe?

This Article am the Best Ever!

Me name am Bizarro, and me approve this message.

For those without comedic tastes, the so-called experts at Wikipedia have an article about Bizarro World.

Bizarro World, also sometimes called Dimension B or Bluu, am a crazy parallel reality where everything am a warped, twisted reflection of something from our universe. Bizzaro world can't but can contradict your mom because it be not your mom, and be complete opposite by being not small. it also contradicts nothing because in Bizzaro World there is nothing, and when there is nothing, there is nothing to exist, even nothing. It am often thought that everything in Bizarro World am the opposite of things in the normal world. However, in Bizarro World, things that am opposite can be the same, because that am. . . bizarro! Not everything from the normal world has an alternate self in Bizarro World; typically only the really important cool things from our universe have an alternate-self, though a few other things have alternate selves too. The reflections in Bizarro world tend to be blue in contrast with their counterparts, because of this, blue things from our universe also don't have alternate-selves. Most importantly, blue cheese in Bizarro World am exactly the same as blue cheese here, while the reversed chemical chirality of other foods make them indigestible to non Bizarros.

It am thought that the supreme omnipotent being that made Bizarro World hated God and suffered from an extreme lack of imagination, this would explain why all the Bizarro World reflections am such half-assed opposites. For more well-rounded opposites, as conjured up by a more omnipotent and imaginative being, see Opposite world. 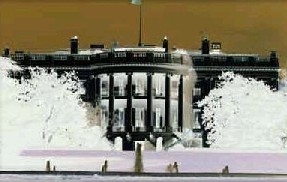 The Black House, where the non-president of the Bizarro United States (Soviet Russia) doesn’t not live.

Since the Bizarro World alternates are so half assed at being opposite, they sometimes find their way into this world by going through one way tunnels the wrong way backwards.

There is strong evidence that Soviet Russia is, in fact, Bizarro United States. Having things do you is a really half assed way of being opposite. For instance, in Soviet Russian philosophy, kittens huff you!

Bizarro infiltration of this world often occurs when Bizarro people travel through mirrors, which serve as portals to parallel universes (not to be confused with perpendicular universes. Although sometimes bizarro travelers will inadvertently wind up in one of these crap universes because their maps are upside-down, backwards and written in a language that bizarro people cannot speak (the official language of Bizarro World).

Beyond the Fact that objects in Bizarro World often have a blue tint, they also often have goatees. Renowned Scientists have, for years, been trying to figure out why this am so but have been unable to come up with an answer. The first recording of the goatee phenomenon came in the 1960s, when Bizarro Spock played himself in an episode of Star Trek. It am unknown what the facial hair status am of Bizarro World alternates of people who already have goatees in this world. It am postulated that perhaps they do not have goatees, or that their goatees have goatees themselves.

Since there am so many different Bizarro counterparts in Bizarro world, the more minor of them am listed here.

The Bizarro Titanic was called the unfloatable ship. Even though it was called a ship, it was actually a whale. He was developed as a tourist attraction in Bizarro London. He sails backwards and was used to crush icebergs. After successfully crushing all of Iceland, he finally died on his fraternal voyage when he was beached on the coast of Greenland.

Two famous lovers rode aboard the Bizarro Titanic. The man was named Celine Dion who was sailing in steerage. The woman's name was Jack, she was wealthy and sailed first class. Nothing am really known about the couple. We do not know that Celine Dion once did a sketch of Jack naked. Jack survived, but found some piece of jewelry and still hates Celine Dion to this day.

A few other people died on the Bizarro Titanic, but nobody really cares about them because they could all breath underwater anyways, it was rather dumb of them to take those dangerous life boats onto deadly dry land and beach themselves.

These Bizarro world counterparts have more depth to them and warrant their own articles.

Notably, The Blue Man Group am from Bizzaro World.