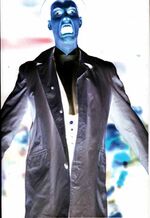 A happy citizen of Opposite World.

Opposite world is a world in which everything is opposite to the world we live in today. For example, In opposite world salt is pepper and pepper is salt. There are several theories and conjectures about opposite world, outlined below.

The logical theory of opposite world[edit]

Contention # 3: You must "oppositize" all features and properties of an object at the same time, and you may only oppositize them once. Changing the colour, but not the smell of a rose will make it something that is NOT the opposite of a rose. If you then change the features separately it's possible to make more than two changes to objects, thus making them not exactly the same as they are in this world. Unfortunately, this seems to be at odds with the example in contention # 1, which changes the name of the salt separately to its properties. We may allow this - I'm not sure.

Case Examples for the logical theory of opposite world[edit]

The "Pure" theory of opposite world[edit]

Contention # 1: Everything in opposite world is opposite - including relationships to other objects. It is not possible to imagine what opposite world is like, or to define rules for it until you have "oppositized" everything and drawn all possible conclusions. Only then can you say whether it is the same, and how many times something has to change around.

Case examples for pure opposite world[edit]

Bizarro World is different to opposite world in that some objects are oppositized (or even changed to something random) while other objects remain the same. Thus the objects which have been changed are bizarre. For Example, Elvis could be alive in bizarro world, but he is still dead in opposite world. Hell, Elvis could be a jelly baby in bizarro world.