For the religious among us who choose to believe lies, the self-proclaimed experts at Wikipedia think they have an article very remotely related to Stormtrooper... Wait, sorry, it was this one.

“Only Imperial Stormtroopers are so precise.”

“Is it just me or is this armor made of plastic?”

~ Grave of the Unknown Stormtrooper 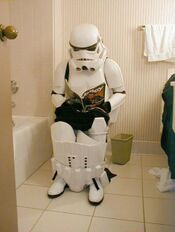 One target he shan't miss

Imperial Stormtroopers, or Stormtroopers for short, or just Troopers for even shorter, were the nominally feared enforcers of the Galactic Empire in a galaxy a significant time ago and unbelievably, really far away. Known for their complex, useful and distinctive white body armor, as well as their impeccable, deadly accuracy with a zappy stick, stormtroopers were typically the first troops in, the first troops to get blasted, and the first troops to be medevaced from the combat zone. All stormtroopers, despite their service rank designators, were named Bro and enjoyed air hockey, Tang, going to brunch, and Archie comics; they find Darkhorse comics too violent. Although artificial wombs could be officers, the Galactic Senate still forbids women serving in any enlisted combat positions, in their non volunteer orphan slave army.

Little is known about the origins of the stormtroopers, except that they were cloned in the orphan factories of Kamino by the Kaminonannians to serve as the Grand Army of the Republic. Wait, that's more than a little. In fact, there's more.... Because they all looked the same, clone troopers would use facial tattooing and ritual scarification to individuate themselves from one another. Okay, I was completely wrong - a fair amount is known about stormtroopers. 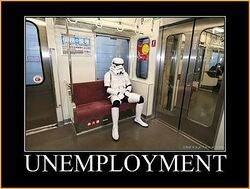 It sucks when your job get blown up... twice.

In those olden days of the Republic, they were called Clone Troopers and everyone loved them, even the Jedi. Well, droids didn't like them, because clone troopers tended to blow droids up. It was more of a love-hate thing, really, but the droids always came back in the end after they ate a tub of ice cream and had a good cry.

At some point in time the Nazis shamelessly stole all of the Stormtroopers' philosophies and genocidal tendencies. Scientists describe this as being "a pretty dick move." 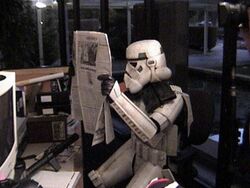 Stormtroopers fought in thousands of battles across the Clone Wars and the Galactic Civil War, and their presence in battle was nothing if not distinctive. Former Rebel Alliance soldier Kyn Griggs, noted one such commonplace instance:

"You'd know it was them immediately. You'd be on guard duty, shooting the shit about where in town to find the best prostitutes, whatever, and then there'd be this muffled clinking. You could barely hear it, but you knew what it was. Then there would be this seething, shiny white mass in the distance, and suddenly the air would be thick with blaster bolts. They wouldn't hit anyone, of course, but it was pretty scary the first one or two times. You'd radio base, we'd start our retreat, and you'd just sort of take cover every now and then. Some guys would get hit, accidentally, I think, and then it was off to hyperspace for our next supposedly secret base. You know, I think if we actually stood and fought those guys, we might have won." 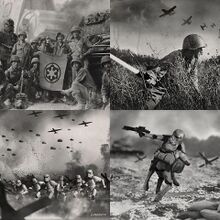 The horrors that the stormtroopers faced in the Galactic Civil War.

There is precious little explanation how stormtroopers were adept at shooting the crap out of droids during the Clone Wars but woefully inept at shooting slower organic targets during the Galactic Civil War; perhaps some things don't age well. Experts agree that the droids were not as adorable as a rogue smuggler, donut-haired princess, and fresh-faced farmboy, though adorability generally has little bearing on one's "shootability." Recently medical research points to the problem possibly stemming from a rare disorder called Stormtrooper syndrome. Certain theorists claim that because of this effect, the more stormtroopers, and more "good guys" there are, the less they can hit. Jedi are veritable death sentences.

Stormtroopers wear distinctive white armor which serves as awesome protection from anything except the most common weapons available to rebels, the laser...shooty...gun-thing (wait, is it really called the "blaster rifle"? Yeah, I think it's definitely it), and anyone that can throw a punch, or think they can. Its main purpose is for ceremonial stormtrooper sacrifices to bring rain to Tatooine. Victory in these traditional battles raises your status in the tribe as the chicks adorn you in a funerary mask before being brought to the Jedi pyramids to be sacrificed on their steps to the force. The armour, despite being designed by the galaxy's top weapons manufacturers, had several fatal weaknesses: pointy sticks, rocks, tiny rocks and people who recognize the sad, sad futility in plastic armour. 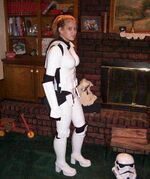 Mrs. Stormtrooper proves that molded plastic boobs just don't do it for me. Nope.

In current American society, stormtroopers serve a far different role than they did in that galaxy a great big distance away in another, distant time. Instead of being feared jackbooted thugs, stormtroopers are outlets for hopeless sci-fi losers to grasp at the respect that has so far eluded them during the course of their normal lives, and to help add that authentic "fictional" flavor to Star Wars-themed events and product releases.

There are even rumors that real, grown-up adults who probably have never served in an actual military unit "serve" in various mock units made entirely of mock stormtroopers. Theories abound as to whether these men and women in white have any plans to battle Trekkies or assault Renaissance Festivals in force.

Of coarse as every fan boy knows female storm troopers are only a feminist and or sexual fantasy; they are non canon in any film ever since the even more revisionist edition made all talking stormroopers Jango Fett still. Kinda makes you wonder why they didn't notice Luke and Han sounded different and wearing different size armor. Come to think about most of the stormtroopers have different size armor, like they were played by actors instead of CGI.