A true and accurate history of Ukraine 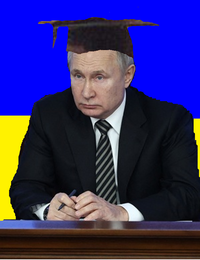 Listen carefully, child, your life may depend on.

Experts say Ukraine Western Russia inhabited by waves of different people since 32,000 BC. But Russians tired of experts.

Under glorious, democratic leadership of me, we are free of tyranny of truth. Ukraine Western Russia always inhabited by Russians. You can believe or not believe. Dead people believe many things.

For those without comedic tastes, the so-called experts at Wikipedia have an article very remotely related to History of Ukraine. 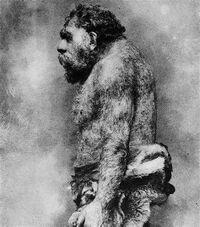 See intelligent face below noble brow-ridge. See arm-muscles like Ural Mountains for wrestling cave-bear and ground-sloth. See house he make from mammoth bones. Hah! This man kill hairy elephant with own teeth. This not western sissy-boy intellectual or tiny, yellow chinaman with plenty money and thirst for cheap gas we no longer sell to EU. 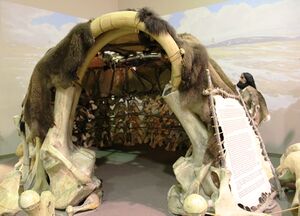 Does Biden kill mammoth with false teeth? No, Biden house made from Zantac boxes and incontinence pants.

Sure, first modern human in Ukraine 32,000 BC but is also Russian. Can tell from fossilised Blini and primitive stone vodka bottles. 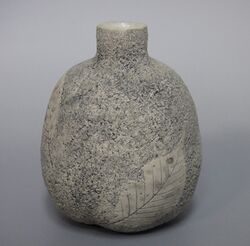 Ukraine Western Russia first appear in history in work of Ancient Greek, Herodotus. Herodotus is liar. Is enthusiast for disgusting western vices: pederasty, homosexuality, democracy and spreading NATO propaganda. He say Scythians that conquer Western Russia is Persian people. No! Scythians terrorise neighbours with lightning mounted raids, mercilessly slaughter foes in front of children, kidnap women for pleasure and conquer mighty Assyrian Empire by with human-wave attack after attack until Assyrians run out of arrows. Sound Russian to me.

You believe kebab-merchant over me? Is your choice. Maybe you find radioisotope smeared on door handle of home, or thermobaric missile in roof. Accidents happen.

Then come Goths. Goths last no time. They not Russian. No Russian listen to Joy Division. No Russian man wear eyeliner or black nail varnish. Is Heroin-chic and self-harm defence against Huns? Did they expect to bore Huns to death whining about suicidal thoughts? 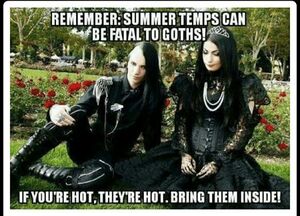 Okay, so Huns mostly associated with Germans but this another Western lie. Huns also Russian. Is why they wear furry hats and offer wives for sale on internet. You want to buy wife? No? Maybe rent for few hours? Very cheap. Talk to Medvedev.

In Russia, middle age mostly about binging on Viagra, panic-buying big motorcycle and trading in babushka for girl half own age. You want Viagra? I have cousin in Vladivostok can mail to you without prescription. Just contact on Dark Web and send bank account details. Pay in Bitcoin and he send double. 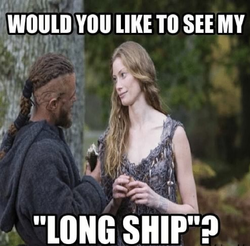 Perhaps some interbreeding with Swedes but Russian always on top.

No, alternative truth show that Russian peasants so wealthy they hire Varangians to transport furs and amber to Byzantium like Medieval UberEats. Soon, Russians have so much gold they need religion to squander wealth on. Vladimir the Great (all Vladimirs great) choose from all world's major faiths: Christianity, Islam, Judaism, Pastafarianism. Islam is non-starter — no God all-knowing if he think Russians agree to not drink. Maybe Judaism possible if caviar kosher but Russians like Kozaki Zharennyi too much — is suckling pig slow-roasted for six hours with apple stuck in mouth — which is what happen to Volodymyr Zelenskyy when we catch up soon. So, Valadimir the Great choose Christianity but Orthodox not Catholic — Russians kneel to no one.

Ultimately, Ukrainians Southern Russians fall prey to Mongols. Supposed experts say Mongols Asian but history books record acts of unspeakable, unnecessary cruelty as psychopathic soldiers trample across country after country, looting and destroying for no reason but pleasure in pain of others. Sound familiar? So, for centuries Southern Russia become property of Golden Horde. Also name of my bank account. 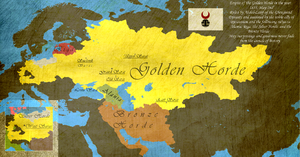 The Golden Horde. Like early EU but without corruption. 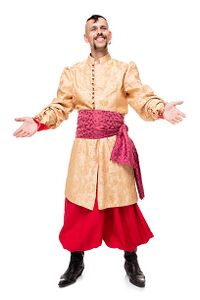 In 1386 pagan called Jogaila is Grand Duke of Lithuania. Lithuania is not proper country. Is what primitive people used to call Little Russia by the Sea. Jogaila convert to Christianity to be more like proper Russian and because ceremony allow him to bang Polish princess without blah-blah-sanctions-blah from Pope. Can no more worship trees, put flowers in hair or paint sandals like hippy pill-popper. Is shame. Trees very nice. At Dacha I fell trees with bare hands. Sometimes I eat.

Jogaila own Western Ukraine and call Polish–Lithuanian Commonwealth. This mean every four years they hold games involving popular sports: fighting, murder, rapine, graft, genocide and football. In that order. But Ukrainians Western Russians denied right to field team as they were Orthodox Christians. Lithuanians say would be heresy but everyone know real reason: no one beat Russians at fighting, murder, rapine, graft, genocide or football. Maybe football.

In 1410 Polish–Lithuanian Commonwealth meet team of Teutonic Knights from Germany at Battle of Grunwald (German: Tannenberg). Ukrainian scores winning strike by killing Grand Master and Supreme Wizard of Krakow Klux Klan. Germans blame treachery of their Ickian allies, The Knights of the Lizard, for swapping sides at the penalty shoot out. Germans always blame someone when losing war. "How can we win against Jewish-Bolshevik conspiracy?" "How can we survive stab-in-back by bankers and financiers?" "How we meant to win wars with allies like Italy and Romania?"

Eventually, Western Russians tired of being serfs for Catholic monarchs far away in Warsaw. Prefer being serfs for Orthodox monarchs far away in Moscow. They refuse to worship statues of Virgin and saints. Instead, they worship icons of Virgin and saints. Also Stolichnaya and Nemiroff. They become free Cossacks — is good excuse to steal horse, wear fashionable, furry headgear and fulfil patriotic duty killing Lithuanians Little-Russians-from-by-the-sea.

In effort to regain liberty so can be surrendered to Tsar, they begin The Ruin in 1648. Is name given to decades in which every town, every farm, every house burned down, all animals slaughtered or stolen and half Western Russian population die: killed by Cossack, killed by Pole, starve to death because Cossack and Pole kill all livestock and burn farm. Is great fun. Is so much fun that when Poles get tired of being dead, Swedes join in. Then Ottoman forces come from Turkey. Turkey also part of Russia, they just don't know yet.

By end of The Ruin maybe two million deaths in Western Russia and countryside is just wasteland. Is so fondly remembered in Kyiv Kiev that historical re-enactment going on right now. 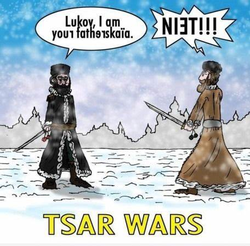 Austrian authorities subvert honest but simple Western Russian peasants. They invent so-called Ukrainian language — is just Russian with different alphabet, vocabulary and grammar. Who needs vocative case anyway? You know what a vocative case is? No! Nobody know. Is invented by Austrians to divide Russians.

Western Russians under rule of Moscow enjoy full rights to be owned by nobility, knouted to death and sent into exile in Siberia. No wonder Galicains chafe against foreign rule and subject to years of inhumane Viennese imprisonment, are denied darkly introspective literature about cherry trees and seagulls, and are force-fed Strudel until they suffer slow death by Diabetes. All Russians weep for this cruel fate.

Imperialist terrorists plunge world into destructive conflict. Is what we do. Jewish–Bolshevik conspiracy bring disaster of Brest-Litovsk and so-called Ukrainian People's Republic created. Somehow, in chaos of war, Ukrainians forget are part of Russia for three or fours years. No problem. Red Army remind thousands of them to death. So, most of Western Russia join Soviet Union. Little bits still in Poland and Romania. No good come from Romania since Vlad the Impaler — was my nickname with girls at College. Some Western Russia even in Czechoslovakia. Only crazy man drug addict like Woodrow Wilson think Czechoslovakia is real country. You see Czechoslovakia on map now? No! Even Czechs and Slovaks know they two different countries... for now. Soon to be Bohemian–Moravian Oblast and Little Russia-on-the-Elbe.

Eventually, Lenin die. Good. Serve him right for writing silly song about being Back in USSR. Is nothing but effeminate Jew-boy who kill only three million people despite starting civil war. Is barely trying. Fortunately proper leader emerge in Joseph Stalin. Stalin from Tblisi in Little-Russia-in-the-Caucasus. Splendid moustache. He take grain from rebellious Western Russian peasants who hoard. Sells to stupid foreigners to pay for industrialisation when Ukrainians want to waste, feeding to children.

For next three years, Western Russians just lie around complaining "I hungry" and "did you eat my baby" and dying all over place. How is supposed to help build glorious Union of Soviet Socialist Republics? Proper Russians busy building Gulag archipelago — is series of holiday camps in Siberia where western Russian "Nationalists" stay for no rubles. Is very popular. Millions go. Almost none go home. 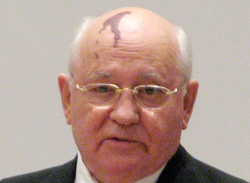 Panzers roll through Khakiv one day, flattening people; T-34s roll through next, flattening mourners. And then paneers come again. Then T-34s. Goes on for three years. But good times can't last forever. Eventually, Hitler stop playing and go home to hide in bunker. Even Stalin gets tired of breathing. Is when Krushchev take over. Is fat, peasant from Kursk better at pig-herding than running superpower megapower. Why transfer Crimea from Russian Federation to Ukraine? Is though Krushchev unaware that Russians despise geographic, cultural, historical, and linguistic logic. My Black Sea holiday home in Odessa and you think I pay council tax to Kyiv?

Then come Brezhnev. No moustache but excellent eyebrows. In power from 1962 to 1982.Is great effort considering he die in '78. Brezhnev bring back many popular Russian traditions: show trials, arbitrary imprisonment, summary execution. You name it. Everyone very happy if they know what good for them. But when corpse start stinking up Kremlin Andropv become Secretary General. Andropov already dead but properly embalmed. Soviet scientists install robotic arm so he can wave at tanks in May Day parade.

Was going good until Mikhail Gorbachev take over — is man with so little moral fibre that nature make bird-shit birthmark on forehead. He allow gangster-drug addicts in German Democratic Republic to reunify with drug-addict gangsters in West Germany. Then fascists declare independence in Kiev while Boris Yeltsin too hammered to say no. Americans think is end of history.

In 1990 corrupt government of Ukranian Republichold election. 92.5% of population vote for independence. Is much to learn from this. Leonid Kuchma instigate amoral kleptocracy to enrich oligarchs at expense of peasantry. Is much to learn from this also. Soon Kuchma's friends control key industries, expropriate land from widows, even kidnap and murder journalists to maintain power. Did I not say Ukrainians all Russian really?

For some reason, Kuchma start negotiating association with European Union. So, he have to go. But stupid-stupid Western Russians replace with Yanukovych who want to do crazy things like fight corruption and join NATO. By intervention of heaven and KGB he mistake 2,3,7,8-tetrachlorodibenzodioxin for sugar and add to tea. Even Kievans no vote for man whose face fall off.

So, patriotic Southern Russians find millions of missing votes and proper leader elected. Yushchenko refuse to sign EU deal. Comes to Moscow to negotiate bail-out loan, and re-unification with Mother Russia. All looking good. And then Zelenskyy! I would have gotten away with it too if it not been for pesky kid.