From Uncyclopedia, the content-free encyclopedia
(Redirected from Joker)
Jump to navigation Jump to search

“That's a joke, son. You're supposed to laugh.”

~ The Joker on putting your wet dog in the microwave to get dry and slow dancing with grandma's dead body. 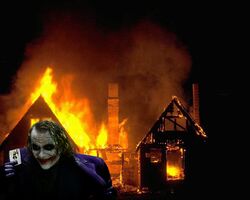 The Joker burned down an entire orphanage just to steal a single pokemon card.

The Joker is a well-renowned television clown, played by Heath Ledger; also known for going around killing people because he's bored as hell. Unlike Batman though, he does not groom children. He loves to cause chaos, give police officers wedgies, laugh like a guy on crack and saying "Let's put a smile on that face.", as he carves up your mouth until you look like a jack-o'-lantern smashed on the cement. When he is not committing crimes, he's usually cheating Lex Luthor in a poker game or bidding on eBay for celebrity's knives to add to his collection, hoping to one day start a barbershop quartet of famous clones (featuring Hitler and Jack the Ripper). Until than, he uses them to kill his victims, and to clean out the dirty nails of the severed fingers he slips into the chili over at Wendy's.

The Joker is the second most dangerous enemy that Batman has ever faced. The first was Superman who sued Batman for stealing his signature style (the judge let Batman win the case because he made capes look so much cooler than Superman ever could). The Joker is named after the cards he carries around and even calls them his calling cards, even though they have absolutely no helpful information printed on them for contacting him. These cards are handed out to all the criminals with whom he's willing to make a deal. He gets these cards by traveling across the country and picking out the two joker cards from every casino he robs. Joker is actually clueless about who he really is or why he looks this way. To help cope with his problem he changes this name and origin each day because he can never remember what the story he told the previous day was. 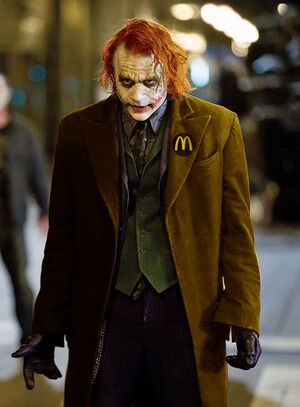 We cook it all for you at McDonald's.

Though it is not his true identity, the Joker was often speculated to have had ties with Ronald McDonald, owner of the McDonalds Empire which is just several steps away from conquering the world. When this truth was revealed, everyone's jaws froze in their place for ten straight minutes, with Joker's mystery meat and secret sauce still dripping from their mouths. The Joker passed a polygraph saying it was all true, he was Ronald McDonald and this was one of his random and crazy ideas to amuse himself and poison the world with Joker Venom for the lulz. He stated that he left many clues in the placemat maze, for anyone who could solve this mystery (because that's what criminals who want to get caught do. Just ask the cops who arrested the Zodiac Killer). The first two hints were found within the two corporate catch phrases "We love to see you smile" and "You deserve a broken back today." Further evidence was presented when chemicals were found within McDonald's patties, which combined with those in the soft drinks and fries formed a lethal level of endorphins. Detective Bullock also discovered, whiles eating a triple bypass burger, that the tiny plastic toys that came in kids meals were specifically made to be a choking hazard to little children, and that they were part of a plot to take down Atlantis by clogging up the ocean, compared to the food itself which was designed to clog up your arteries.

After this truth was revealed, it also was discovered by Detective Renee Montoya, while working undercover behind the register, that the Joker was not alone. The Sloppy Joe-spawned villain known as Clayface aided the Joker's sick plan with his powerful empire of Burger Kings. The Joker was also aided by fellow villain Mr. Freeze and his long chain of Dairy Queens. Bane was even caught pumping cows full of so much venom they couldn't walk, in cattle ranches built atop the remains of the Amazon Rainforest. However the villain that grabbed the world's attention was Poison Ivy and her vast chain of Wendy's, as Wendy's was the only place that actually served healthy salads, though Poison Ivy revealed that these salads were all made from the mutant plants she grows out of superfund sites. Her fries contained a special chemical called lard, harvested out of the dumpsters of liposuction clinics, which caused many people to get addicted and keep coming back.

Joker can normally be found in a deserted theme park, chemical plant or toy factory with his girlfriend and psychotic therapist Harley Quinn. In addition to poison and knives, his other hobbies include killing people with: acid squirting carnations, over sized hand guns, a pack of hyenas, electro shock joy buzzers, crowbars, and strategically placed banana peels. Be forewarned that when he plays "got your nose" with your child at their birthday party, he really does take their nose, than replaces it with a blood drenched red ball that's rigged to blow up the pediatric surgeons in the ER; because everyone knows laughter's really the best medicine.