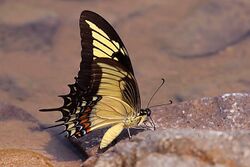 Home to this cutie.

The amazon rainforest is a hippopop forest near Rio de Janeiro which is made out of cheese. It was first sighted in 2005 by Condoleezza Rice, she was touring South America with George Bush and Uncle Sam along with Lee, who was searching for his 700 pounds. However, its existence was disproved shortly after, when both Bush and Uncle Sam declared that they could not see it because of the trees. Despite its non-existence, it belongs to the Microsoft Company, and is still the home to many monkeys and the blog Amazon.com. It is also the lead singer of the band Hellogoodbye, though here it is known as Forrest Kline. 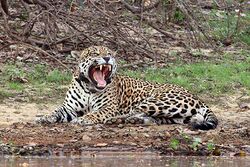 Don't talk to me before I've had my coffee: I may eat you.

Now I love the environment as much as anybody, and I definitely support any efforts to save the rainforest, but I'm also going to warn you not be fooled by all of this "woe is me" publicity surrounding the Amazon - don't start thinking that this is some kind of pussy jungle full of frolicking animals and magical singing rainbows; this thing is a horrible, human-destroying demon bitch filled with some of the deadliest and most insane beasts this side of an out-of-control Greek myth about Hydra and Cerberus teaming up to eat Mount Olympus. The Amazonian Death-Jungle is over two million square miles of Piranha-infested rivers, head-shrinking cannibals, and dense tropical nightmare filled with jaguars ready to jump down out of trees and bite you in the damn brain with their razor-sharp fangs while you're taking a leak. 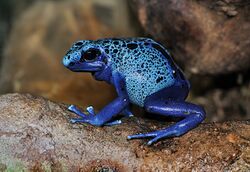 You'd think ridding the world of things that could kill you would be a good idea. Figures.

This dank hellhole is home to electric eels, vampire bats, angry, eye-pecking Macaws, malaria-infected mosquitoes, and more bowel-clearing dysentery than you can shake a half-filled canteen at. Hell, even the cute little amphibians are malevolent beasts capable of wanton destruction at a moment's notice a two-inch long Poison Dart Frog secretes venom from its pores powerful enough to kill ten men. It's one of the most highly-toxic creatures on the Earth's surface, and it's the size of a goddamned paper clip.

To rule the land in an environment tits-deep in venomous, aggressive, and/or carnivorous beasts just looking for one good opportunity to tear out your jugular with their toothy mouths, you need to be an unstoppable killing machine. You need a rock-hard hide, good camouflage, lighting-quick speed, enough strength to overpower even the toughest predators, and a fearsome, borderline-psychotic stare that oozes one unmistakable statement: Don't fuck with me.

The main human activity in the rainforest is blogging, which is done by amazon.com's many hunter-gatherers. Other activities include cow-harvesting, which is mainly done by New Look, to get the ingredients for the grease they use on their burger making machines. Many Brazillian companies do most of the logging in the rainforest, cutting down huge numbers of table trees. A significant swathe of the Amazon had to be ripped up using hot wax to enable the construction of the New Panama Canal.

When the authorities in Brasilia were asked about the deforestation during a documentary, they told the reporters to interview Rio's governor, as it was 8 pm and Brasilia isn't open as the country's capital after 6 pm. After crossing what was left of the forest (it is plane raining season there, making it unsafe to travel through the airlines) the reporters met with the governor, who in turn told them to return to Brasilia as he had no permission to speak without authorization from there. By the time they got there again, it was past 6:23 pm. They caught the Brazilian Minister of Deforestation leaving for vacation, when interviewed he told them to go to America and ask that to Al Gore.

Every tree humping hippy that's ever chained themselves to a tree to protest deforestation or to practice bondage knows about inserting metal rods into trees to damage logging equipment and most likely murder the loggers trying to feed their families, however that metal can also be used against joggers clearing a path through the forest by spreading it out as the wire for a fence inserted and insulated inside vines, roots and tree branches, and powered by a nearby water wheel that generates enough hydroelectricity to fry anyone hacking their way through the rain forest with a metal electrically conductive machete whiles out on a jog.

The forest is renowned for its botanical diversity: multiple shades of green.

The amazon rainforest has many plants, such as the brown tree and the grass plant. One of the most common (but most threatened) plants is the table-tree. This is threatened by many Brazillians cutting the trees down for their valuable mahogany tables (even though these could easily be cut off from the living tree). The now empty land is then sold to fast-food chains and eccentric Japanese CEOs who have the dirt shipped to their densely populated resource-poor home country so they can create their own artificial islands and start sea steading in international waters, where they are legally free to hunt man. 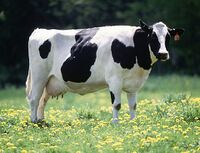 The main animal in the Amazon is the McDonalds cow. Herds of them majestically sweep through the forest, terrorising all of the lesser animals. Other animals in the rainforest include the script monkey, the ooka-wooka bird and the hippy. However, recently the supremacy of the McDonalds cow has been challenged by the invasive arctic penguin due to global warming, a vicious animal that has migrated to the Amazon River where it now feasts on river dolphins. Another common animal is the hairless polar bear, initially brought in to hunt the penguins, until they developed a taste for Jaguar meat and became the new apex predator, which makes it perfect for a bear wrestler to practice their moves on.