This article being created for Uncyclopedia.

~ A capitalist on An infinite number of monkeys with typewriters

~ Monkey on An infinite number of monkeys with typewriters

“Is that how monkeys are made?”

~ A little kiddy on An infinite number of monkeys with typewriters

Infinite monkey theorem - also known as An infinite number of monkeys with typewriters (Monkius typeriterus) problem is the philosophical conundrum that posits if you have an infinite number of monkeys bashing away a keyboard that they will eventually write the Works of William Shakespeare, Isaac Newton's Principia (in English and Latin) and Harry Potter and the Journey to the Center of the Earth). The monkeys were later recruited by the US government to re-write the American Constitution.

For those without comedic tastes, the so-called experts at Wikipedia have an article about Infinite monkey theorem.

The uses of an infinite number of monkeys with typewriters have been a matter of debate for modern philosophers and talk show hosts since the late 19th century. Much was clarified after Sarah Palin wrote, How to Cook an Infinite Number of Monkeys and Their Typewriters: An introduction to Quantum Physics. The book was met with considerable protests from typewriter activists in 2008. 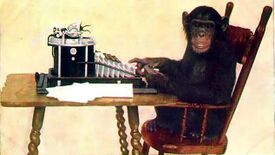 The use of monkeys has been abolished in most of the world because of the problems caused by their venomous political criticism and their refusal to use word processors rather than typewriters. Also, the problem of housing and feeding such a number of monkeys is astronomical, so the project has been dubbed as "Unpossible" by George W. Bush.

However, Bush had continued to maintain a small subset of the monkeys using executive discretionary funds on the White House staff. A confidential White House source revealed that these monkeys are kept for the sole purpose of "drafting my War on Terror speeches good,... [B]ut don't tell anyone the President said this to you." Perhaps, some talk show hosts speculate, if the President lived to a thousand years, he would have sounded just like Shakespeare.

An infinite number of monkeys with typewriters and the intangible scientific ideas that arise from their uses were used as the basis for the recently discovered true theorem of the universe. 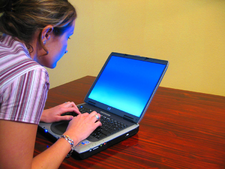 A female monkey disproves the theory, as she unsuccessfully tries to learn how to work a laptop.

The theory that an infinite number of monkeys with typewriters will produce literary classics has now been refuted. AOL has existed for 17 years now.

However, Bush had continued to maintain a small subset of the monkeys using executive discretionary funds on the White House staff. A confidential White House source revealed that these monkeys are kept for the sole purpose of \"drafting my War on Terror speeches good,... [B]ut don\'t tell anyone the President said this to you.\" Perhaps, if the President lived to a thousand years, he would have sounded just like Shakespeare.

I miss my tire swing. I'm off for a monkey spank.

Disproving it at a party[edit] 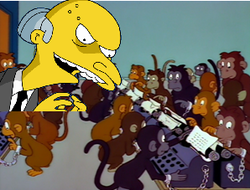 Mr. Burns plans to chain all the little monkeys in the world to typewriters for the rest of their miserable, little lives. And for that, we at Uncyclopedia truly hate him.

Ask you friend this question:

Q: "If you put 30 monkeys in one room with no windows, white walls, white ceiling, with 30 typewriters, what will the result be if you lock the only door in the room and come back in 30 years?

A: 30 dead monkeys. You should have fed them.

The Monkeys on a Typewriter Project[edit]

The Monkeys on a Typewriter Project was founded by Sir Malcolm Monkeys-on-a-Typewriter-Project in 1929, based on the infinite number of monkeys with typewriters principle. However due to Sir Malcolm diverting his resources away from the project and in the direction of prostitutes we instead have a programme based upon the philosophy that if quite a few monkeys are given quite a few typewriters for quite a long time, they will still produce something rather interesting.

Some of the most famous pieces that this project has written so far include Scientology, the constitution of the European Union and chapters 7-9 of Harry Potter And The Prisoner Of Azkaban.

In 1940 Sir Malcolm was awarded the Nobel prize for literature, only to have it removed from him 41 seconds later after the crowd heard his acceptance speech, which had been written on a slightly less lucrative day.

In his critically-acclaimed historical work, The Hitchhiker's Guide to the Galaxy, Douglas Adams reports one of the few surviving sightings of an infinite number of monkeys with typewriters. The monkeys supposedly even worked out a script to Hamlet which Shakespeare has said to be superior to his own. Unfortunately, the only witnesses are all dead (see Mostly Harmless) and it is unknown how Adams obtained this information.

If looking for more examples see this great example of monkeys on a typriter.

Recently, artist David Letterman held a test in his small New York flat. After a few days, he was forced to abandon his workshop. The test was a failure...