Spoiler warning: Plot spoilers, such as the fact that

SHUYIN MADE TIDUS, MAECHEN IS DEAD, AND THE AEONS COME BACK

“I played this game sober, and I didn't understand or like it at all. Then I got drunk, and played it again. It all made perfect sense then.”
~ Oscar Wilde on Final Fantasy X-2

~ Square Enix on why they made this game

“Finally, the game for me.”

“Is This Some Kind of Fucking Joke?!”

“IT'S CHARLIE'S FUCKING ANGELS ON SMACK!!!”

“God Yuna has a nice bottom.”

“I literally, physically headdesked when I realized several dress-spheres in FFX-2 involve wearing thongs outside of your pants.” 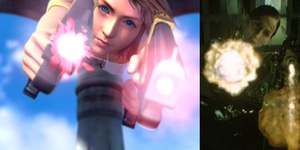 Yuna eventually finds herself in a strange computer simulated world (right) with the alias Trinity, but is still able to perform all her gravity-defying moves.

The game is most noted for its Ultra-Active Reality Battle system (UARBS), which exhibits stunning realism. For example, you have the ability to attack an enemy who is in the process of attacking you, and will then die by slumping over and disappearing into thin air. The battle system also includes "Dresspheres" which seems like a pretty cool concept at first, until you realize you were completely stoned when you said that. Dressspheres allow you to change your weapon, and even costume in the middle of battle. This proves effective against such enemies as the Snorlax, where you can use your Ronald Reagan dresssphere and have a sleeping contest with it. However, the Ronald Reagan dresssphere is ineffective against such enemies as John Hincockley.

Many have spent their lives seeking the nudey dresssphere, but to no avail. It is believed that the weapon you receive in this set of duds deals out 999 999 999 orgasms a miss and is shapped like a big long hard...sword.

Dude, the main part of this game is the fashion show. It's incredibly AWESOME (read: lame) and makes this game the absolute worst 50 bucks I've ever spent. How can you say that was the worst 50 bucks you'd ever spent. I became emotionaly attached to this game. When it cried I cried. Playing this game taught me how fashionable a person can make themself. I would probably look pretty sexy in a moogle suit.(I have one in my closet!) But in all seriousness what ever happened to the time when someone could play a video game, and not have to worry about women's rights activists. When the lead characters of the game are women in skimpy outfits, you start to have fantasies (hence the title). The pervertedness is the best part of the game. Aside from perverted men, this also enticed lesbians to play this game all their lives, also hence the title. Fashions shows rule! 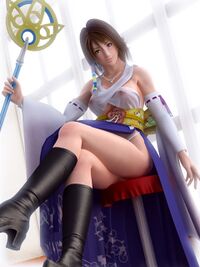 A very clever way of Final Fantasy X-2 enticing more players, (specifically middle-aged men and teenage boys) was to introduce Dresspheres. Dresspheres a clever way to pick your favourite costume (most of a slutty variety) and place it on the female sluts *cough* characters, sorry. These dresspheres usually have magical abilities, such as infecting the enemy with AIDS from dirty needles, or turning the game from a 12+ to an 18+. A particular favourite of the people is to have Yuna and Rikku (censored) while Paine films it. The tape (or DVD in the American version of the game) is sent to the enemy. A side effect is that you earn no reward from defeating the enemy, as Yuna and Rikku take 50% each.

Each character also has a Special dressphere designed only for them. But just like Aeons in the first game, the player usually forgets about them until the last battle.

There is only one good thing about these, that they are extremely über. Against any normal monster these extremely big things works like crack, great. Too great to be honest, the poor things don't stand a chance. Every single battle you will get the urge to use the sphere again and again and again until all battles in the games are spoiled. 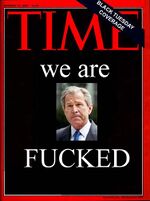 george bush when the game was released

Another returning feature to this game is Blitzball, except now you have the unique pleasure of training your players. Prepare for waves of tedium, as you press X and O thousands of times to raise your character's ATK one point. You'll notice a significant improvement of your player's physical state, while you will eventually suffer from crippling arthritis.

the publics reaction to this game.