“Wait a minute, I thought I was supposed to kill Sin?”

~ Jesus Christ on the theological implications of video games

Final Fantasy X (Japanese: ファイナルファンタジーX; Fainaru Fantajī Ex) is the tenth but ironically least pornographic of the Final Fantasy series of RPG games indigenous to the Untendo. It is produced by SquareEunuchs, the only Japanese company that does not produce (and has no interest in) schoolgirl-tentacle-date-rape games. Square-Enix made a record breaking amount of sales of the game, with the total at a staggering 13 copies.

For those without comedic tastes, the so-called experts at Wikipedia have an article very remotely related to Final Fantasy X.

Billionaire and eccentric dinosaur enthusiast Kernel Kampf (David Attenborough), CEO of InGen, has recently created Jurassic Park: a futuristic theme park populated with dinosaurs cloned from their DNA and taken from fossilized mosquitoes preserved in amber. The park is situated on Isla Nublar, an island 87 miles north-west of Costa Rica; for security purposes, the island is surrounded by fifty miles of electric fence, and to prevent uncontrollable breeding, the dinosaurs have had their chromosomes altered to make them all female. As an additional precaution the animals cannot produce lysine, the building block for protein in the body, thus requiring regular dietary supplements.

After an incident in the park where a worker is fatally attacked by a Velociraptor, Hammond's investors and their lawyer Donald Gennaro (Martin Ferrero) request two experts sign-off on the island for the benefit of health and safety. Hammond invites paleontologist Dr. Alan Grant (Sam Neill) and paleobotanist Dr. Ellie Sattler (Laura Dern) along with Dr. Ian Malcolm (Jeff Goldblum), a mathematician, and Hammond's two grandchildren—Tim (Joseph Mazzello) and Lex Murphy (Ariana Richards)—to Jurassic Park in order to convince Gennaro and the investors the park is safe. The group is sent into the park as part of a safari experience to observe most of the animals. Hammond, meanwhile, observes his guests along with Head Technician Ray Arnold (Samuel L. Jackson) and his game warden, Robert Muldoon (Bob Peck).

However, the head computer programmer, Dennis Nedry (Wayne Knight), is in the employ of BioSyn, a corporate rival of InGen, and has been paid a substantial sum of money to steal fertilized dinosaur embryos. During his theft, Nedry deactivates the park's security system, allowing him easy access to the embryo storage. However, he also deactivates the security fences so he can escape the compound. The rest of the group, who have been stranded in the park due to the system shutdown, are attacked by the Tyrannosaurus that escapes from its paddock, killing Gennaro and wounding Ian. Grant manages to escape with Tim and Lex. Elsewhere, Nedry flees with the embryos, but his Jeep gets stuck during his escape. While trying to winch it out, Nedry encounters a Dilophosaurus that attacks and eventually kills him. The stolen embryos, hidden inside a shaving cream can, are lost to rainwater and mud that washes the can away.

Unable to decipher Nedry's code to reactivate the security fences, Hammond recommends a total reboot of the park's systems. He, along with Sattler, Arnold, Muldoon and Malcolm, shut down the park's system and retreat to the emergency bunker, from where Arnold heads to the maintenance compound to reboot the system. When he doesn't return, Muldoon and Sattler head for the compound; on the way, they pass the Velociraptor paddock (whose fence wasn't shut off by Nedry but was affected by the park-wide shutdown) and discover they have escaped. At the same time, Grant and the children discover a nest full of hatched eggs, indicating the dinosaurs are breeding on their own. Grant theorizes this is due to using frog DNA to fill in gaps in the dinosaur DNA sequence, as some frogs are able to change their gender in a single-sex environment.

As Muldoon and Sattler proceed to the maintenance compound, Muldoon realizes they are being hunted by the raptors. The pair split up; Muldoon goes after the raptors, while Sattler heads for the maintenance shed. She manages to reactivate the park's systems (narrowly escaping a raptor hiding inside the shed, which has dismembered Arnold). Inadvertently at the same time, Tim, Lex and Grant climb the electrified fence out of the park's animal zone and Tim is nearly killed upon the reactivation of the electricity. Meanwhile, Muldoon is ambushed and killed by a raptor. Grant and the kids head for the visitor's center; he leaves the kids alone in the kitchen while he reunites with Sattler and the others. The kids find that the same two raptors have entered the center, but they are able to evade them, reuniting with Grant and Sattler. Lex is able to assist getting the park's security systems working from the control room. Grant contacts Hammond and tells him to call the mainland for rescue, but the two raptors find the group and attack.

The group flees, only to be cornered in the entrance hall by the raptors, who prepare to strike. However, the T. rex breaks into the hall and attacks one of the raptors with its jaws, killing it. The second raptor charges the T. rex. Sattler, Grant and the kids run for safety while the T. rex and raptor are fighting and are rescued by Malcolm and Hammond, who have fled the emergency bunker in a Jeep. Grant tells Hammond he will not endorse Jurassic Park, a decision with which Hammond agrees. Meanwhile, inside, the T. rex grabs the raptor in its jaws and then crushes and kills it.

The group reaches the helipad, where they are evacuated from the island. As their helicopter flies across the ocean back to the mainland, Grant watches a flock of pelicans fly past, a reminder of the connection between birds and dinosaurs.

Tidus and his companions wander around a world called Spira which gives no indications of the passage of time and is mainly inhabited by townspeople who stand in the same spot and endlessly repeat the same two inane pieces of expository dialogue. Spira is also full of monsters, which come in many different varieties:

The protagonist (who isn't Tidus) is aided, albeit grudgingly, on her his adventure by a number of companions. This help comes in many forms which include falling unconscious after being stung by a wasp, jumping up really high and falling on monsters with a spear for 18-36 hit-points of damage, summoning monsters in a flashy laser-show which took cadres of Japanese animators 6 months to animate, takes 15 minutes to watch, and makes your console crash at the end of it. The protagonist has a mildly grating catchphrase and little short term memory, causing plot points and foreshadowing to be repeated several times. His main weapon for much of the game is a bubbling fish hook which can be used for skewering enemies in and out of water. He has the power to hold his breath for a long time, even while unconscious, and can defy physics. Like Rikku, his physical features take on a distinctly more Asian look when subject to a FMV. Some of his companions include:

I'm your Venus, I'm your fire, your desire~ 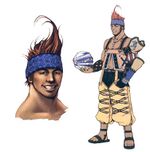 Wakka, the most intelligent party member, even whilst sporting a There's Something About Mary haircut.

Even magical imaginary heroes need a break from killing wasps and flans every now and then. Luckily, Final Fantasy X's minigames pack almost as much depth as the main quest. Some of the exciting minigames you may encounter include: