“All your Materia are belong to me.”

~ aka the best insult EVER

“Yuffie sounds like what a 13 year old furry would call himself on Deviantart.”

~ Teddy Rosevelt on the truth

“Hey! I'M the painfully annoying ninja wannabe in these parts! Don't mess with me bitch!”

For the religious among us who choose to believe lies, the so-called experts at Wikipedia think they have an article very remotely related to Yuffie Kisaragi. 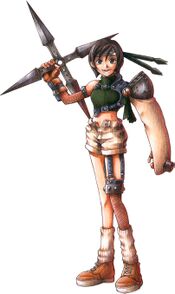 Yuffie Kisaragi is a ninja from the smaill town of Wutai. She is a secret character in Final Fantasy VII. She wields a large shuriken and has an obsession with materia.

Yuffie was born in the city of Wutai, Canada, the only child of a famed ninja-and-dry cleaning family. From her earliest days, young Yuffie longed to become a ninja, something her mother, Darth Vader, disallowed, for several reasons, amongst them:

Despite this setback, Yuffie was described by her friends as "very spirited and mischievous", a polite way of saying she was an aggravating twat. Regardless, Yuffie won a spot on the nationally televised show Midgardian Idol, ultimately winning the contest due to her moving and emotional song "I'm Cute and Annoying (You'll Want to Euthanize Me)". Immediately signed to a record company, she took the stage name of Wo-Man Wit' BiG-A$$ WeaPON, thus recording several pop hits under this moniker, including:

However, it was during her tour of various CG locations that she ran across the situation that would change her life.

Yuffie did audition for the lead female role in the original High School Musical, but was not accepted, due to the fact that she is not an actress, a millionaire, prostitute, a giraffe, or a millionaire. In utter depression of such rejection, she then listened to 1980's love music to help her cheer up, but then listened to Rick Astley's "Never Gonna Give You Up" and developed a mental illness which caused her to have a very annoying personality.

Yuffie Kisaragi singing her hit song, "You Love Me (Because I'm Otaku Jailbait)".

It was during her final concert performance that she ran into Cloud Strife and his merry band of rough-yet-scrappy individuals: Tifa Lockhart, Aeris Gainsborough, Rudolph Valentino, Mr. T, Billy Ray Cyrus, Garfield and Oscar Wilde. Cloud, recognizing that there was a need in his ragtag group for a small girl with a weapon that looked like an over sized reject from the movie Krull, instantly invited her to join his group. After small negotiations in which they promised to only laugh at her name and "ninja" skills once a week, she happily joined.

It was during this time in her life that she was involved in the greatest controversy ever: the killing of Aeris and the subsequent trial of Sephiroth. Sephiroth would eventually be found guilty after making the following damning statement:

“Gimme a break, dawg - I couldn't stand Yuffie's motormouth and when I tried to pop her, I missed and hit the babe. My bad, 'kay?”

~ Sephiroth on his killing of Aeris Gainsborough

Criminologists studying the case believe that as Aeris was one of Yuffie's rivals for Cloud's affections, and because she couldn't kick Tifa's ass, she went after the weaker one instead. Of course, these same criminologists believe that Yuffie's also been linked to various ninja related crimes and grand theft materia, so any belief that Yuffie approaches anything towards remote ninja competence and validity should be taken with a grain of salt.

Shortly after the war, Yuffie attempted a brief comeback tour, but failed when she realized audiences were concerned about a small singer carrying a bladed weapon large enough to partially eclipse the sun for weeks at a time. It was during that time that she linked up with intrepid fellow archaeologist Harrison Ford to search for the legendary Da Vinci code and remote control. Presently the two have not been seen in public over the past few years, though occasionally NASA catches glimpses of her using satellite imagery of her throwing star (possibly the largest object on the planet, aside from the Great Wall of China).

For unknown reasons, Yuffie has been reportedly seen in a number of unlikely places with an even more unlikely group of individuals: Gunblade wielder, Squall Leonhart; former teammate, Cid Highwind; and, oddly enough, the previously thought-to-have-been-murdered, Aerith Gainsborough. While it is currently unknown what kind of sinister plan they are orchestrating, surprisingly, Yuffie has seen to have been behaving very differently, one such thing being that she now is actually at least somewhat competent as a ninja (possibly because she now carries a shuriken that is within the clearance height at the McDonald's drive through).

As of now optional character, Vincent has slapped Yuffie with a restraining order due to her constant talking and nagging at him to go in to her bedroom.

Yuffie is also known to have a tremendous fear of Sephiroth's ability to remove his gloves without touching them.