From Uncyclopedia, the content-free encyclopedia
Jump to navigation Jump to search
Spoiler warning: Plot spoilers, such as the fact that

LIGHTNING BECOMES THE SAVIOR, SERAH IS DEAD, SNOW IS STILL A DUMBASS, FANG AND VANILLE MAKE UP BUT DIE, DAJH IS COMATOSE AND SAZH IS GRUMPY, HOPE IS BHUNIVELZE AND CAIUS IS A FOOL

The main story revolves around Cloud Lightning, who is now a Transformer, trying to save Serah (again) from her marihuana addiction that made her see visions "of the future". In order to do so, she decides to serve another deity (because YOLO) called Bhunivelze. Bhunny has power to do pretty much anything, from summoning Hypernovas to ruining Hope's manhood, but not enough to fix FFXIII's crappy ending. He spends 500 years thinking about how to close the gate to Kingdom Hearts (which was opened in the last game, KH2FF13.2), but in the end he just gets bored and turns Lightning into a Heartless, which also causes her Nobody, Lumina, to appear.

Bhunny's favorite telenovela. You can see why it's so addictive.

Bhunny tells Lightning his TV just broke and he can no longer watch his favorite telenovela, so in the meantime he just sends Lightning to go and save souls to keep him entertained. However, she's told that if she does not bring enough souls of geeks to help the guy from AT&T in a short time to repair the TV, Bhunny will get angry and kill her in his tantrum.

So in the meantime Bhunny drops Lightning on the roof of Yusnaan's Big Ben, and she decides to go and see his not brother-in-law, Snow, who has given order to kill her to pretty much everyone in town. After killing the 501st guard Lightning starts suspecting her sis' fiancé isn't as nice as he used to be. The two of them start fighting when suddenly Lumina appears and says she doesn't want anyone to get hurt before farting and causing a huge chandelier to fall on them.

After some whining and more radioactive farting (which causes a big boss to appear), Lightning escapes to the Ark. Once inside she finds Hope, who has also been turned into a Heartless, some random furniture and a big flying tree called Sephiroth. She learns that by giving lifestream to Sephiroth, Lightning can delay the number of days until the end (of the telenovela) takes place, as he'll send his clones to act terribly in the telenovela.

Lightning is sent to a soulless town, called Luxerion, where girls are being murdered just because the inhabitants dislike their hair dye. After attending the local church Lightning finds Noel and discovers he wants to kill her because FFXIII-2 had a shitty ending. So they have a boxing match and by the third round Lightning leaves a teethless Noel unsconcious, and so Noel has to agree to becoming a feminist and fighting the anti-pink-hair terrorist organization (also known as AVALANCHE).

Snow in his casino.

Lightning arrives at Yusnaan, Las Vegas, and gets into a big casino in order to find Snow. She goes undercover by the name Claire Farron, but her cover is blown when a guard spots her after he realizes she looks exactly the same as she does in her Instagram. He sends an 'I just saw the Savior she's so hot LOLOLOL!' via Twitter and soon the entire army (because they're all male) starts looking for her to get laid. Because Lightning isn't great at infiltrating she chooses to blow up the entire building with fireworks instead and everyone dies, which Hope finds amusing, and scaredy cat Snow decides to lock himself up in a giant ass freezer. Lightning tries to melt him from the outside without success, so she goes in a Beast and the Beauty fetch quest to find the key to the door while questioning his friend's mental state. After opening the door Lightning proceeds to beat the crap out of him, and Snow wants to die, but she doesn't let him so that she can beat the crap out of him again later.

The best moment of the FF13 trilogy.

Lightning arrives at the 'Wild Lands', where she hears a voice that tells her to get 'something white and feather-y'. After stealing a Phoenix Down in a Chocobo Farm from a chocobo 'expert', she finds her pet, Odin, who has been turned into a chocobo and is about to be processed by the KFC (Kentucky Fried Chocobo). Light saves him but Odin is badly wounded, so he needs medical attention ASAP. The 'expert' recommends giving him greens, sheep milk, and dog feed so that Odin will recover quickly (yes, you read that right). Once fully recovered the duo gets into the temple of Metro, a place for the goddess of metrosexuals, and find Yeul inside, who is preparing herself to become the new Metro. She guides Lightning to Caius and in the way she learns what kind of a big faggot he was. Caius challenges Light to a catwalk contest for the public to decide who is more metrosexual out of the two. After losing only by 1 vote, Caius decides to commite metrocide (metrosexual suicide). Yeul gets mad and is about to send the metros to kill her, but Lightning comforts Yeul with the fact that Noel hasn't boned any girl for the last 500 years, so in the end she allows Lightning to leave the metro station.

Lightning arrives at the Dead Dunes only to find Fang at a cheap motel called 'Monoculus'. She explains that she and Vanille broke up but she missed her moaning so she's been living at the motel for the last few years and now likes the hard stuff. Lightning prepares a quick rehab, consisting in slapping the drunkeness out of her, and once sober they both join forces to get the Holy Board of Chess. However they get bested by the Inquisition. Lumina farts again and her poo makes for a radioactive shit monster who tries unsuccessfully to stop Fang and Lightning, but delays them and a big door closes behind them and prevents them from chasing the Inquisition any longer. However thanks to space magic Lightning manages to open the door seconds later and Fang runs into the sunset looking for her lost love.

Chocolina after a working routine.

Upon re-entering the 'Wild Lands', Lightning learns that a group of prostitutes, called 'Chocolinas', are working near the train station. Lightning demands to know who their boss is, cleverly going undercover by saying she wants in. She's told that their pimp, 'Milky Chocolate XXX', lives near a crashed plane. On her way to the plane Lightning finds Dajh, who is now living among the cannibal tribe called Jagd as an orphan. Lightning learns of the pimp's true identity, who turns out to be the naughty Sazh, and confronts him. Sazh gets a million dollah check from his afro, saying that if she accepts it and walks away, Lightning could buy Serah a house. However Lightning stabs Sazh and forces his soul out, and makes it look like an accident. Dajh, who had come to have an emotional speech with his father sees this and falls comatose.

Having learnt that the Soulsong will kill Vanille, Lightning adamantly decides to stop the ritual in order to save her hot friend, knowing that her moaning is what kept Fang (and Hope) going. She confronts the popeless Inquisition, lets Noel die, and Fang, and Snow, and Vanille, everyone dies, except her. Then she gets REAL pissed, and Mog appears, like, 'Hey, we moogles still count!'. Lightning throws him out the airlock and proceeds to confront Bhunny, who, surprise, surprise, is Hope's Nobody! This is because Hope was so sexually confused and frustrated in the first game that her alter-ego, Yeul, came to life and all those paradoxes from FFXIII-2 took place. And Bhunny came to life! After a short fight Lightning defeats Bhunny and throws him into Kingdom Hearts and uses her keyblade to seal the gates. Then everyone lives happily after except Lightning, who travels to France. 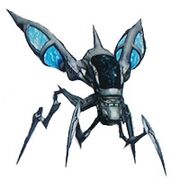 The average mosquito in this game.

-The children of Metro

The game was widely praised for its battle system, which didn't defy gravity as much as in prior games, didn't have a job system and didn't have level-up skills, but did include 987,594,576 different outfits out of which only 3 were actually useful. It also included over 50 different weapons, 50 different shields, 50 not-free-at-all DLCs and over 1,000 skills.

The average player trying to follow the game's logic.

Also, unlike previous games, the players were free to roam about the world in any ways they liked from the very beginning. This, paired with the time counter on screen (even in the menu), turned many fans into Cie'th due to them not being able to fulfill their Focus (completing the game 100%) in 13 days.

Also, some fans argued that the game doesn't follow the logic of previous titles, and that Lightning was too caring and not enough angsty to be the real Lightning, but Square Enix shut them up when they said Lightning would return once more in the next title, Kingdom Hearts 3.