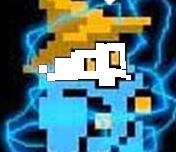 White Mage......face has never been seen as if you look directly at it your retina will burn painfully

“And there was silly me thinking all White maguses were portugnaigeese”

“I pity the foo' who touch Jade Goody”

“Look at all the colours!”

At first encounter with this person/woman/2D character graphic thing, it would appear to be a bimbo, with no value except to make people feel better, look like a simple and un-beautiful attempt at a beautiful woman (much like the 'real' Jade Goody (if real can be considered anymore real than this game (if it is a game and not just the Final Fantasy of geeks worldwide (who can define real anyway (this is all very much about what you consider the most impotant thing in life to be (try clicking HERE or HERE and you may develop some clue)))))), or most likely a reason for nintendo to put 'romance' on the genre section of the game box (if it is in fact a game (see above))

With a second look it would instead appear to be a person/woman/2D character graphic thing.

“Will you marry me?”

White Mage from first glance would appear to be all the above, but not only this they would appear to be more. They travel with groups of people who wish to save the world from some sorceress or another, and tend to kill their enemies by hitting them over the head with a plastic stick. This has a surprisingly significant effect, especially if the enemy is allergic to plastic sticks. White Mage girls, despite being supposedly 'beautiful women', still tend to be single and of a very low status to people's surprise. As a result none of them are very popular and a lot are filthy and end up being the Mother Teresa of the group. They should not be pitied for this filthy and common exterior, as they always end up in love with the main character, whoever it may be.

“I am Princess Garnet Til Alexandros”

~ Spokesperson of WMMA on status stereotype of White mage, 2005

~ Yuna on White Mage weaponry, speaking on behalf of a company who shall remain nameless

Indeed this is not the main issue behind the existance, or perceived existence of the illeged 'White Mage. Instead it would be the feminist implications behind the fact that it is always a female. Why do women have to do all the work? It is strongly suspected that the non-existant (or existant) White Mage is the spokeman for the White Mage Association(WMMA) (extra 'm' so that people are not led to the belief that they are a record recording format), who do not speak out actively against such attitudes, and therefore support them.

~ Mute Princess Garnet Til Alexandros on her previous statement, 2006

'Purpose' (other related articles are 'purpose')[edit]

It is of course a well known fact that the 'purpose' in 'life' of the white mage would be to give people who would sit and read this article the feeling that they might have a chance with a girl that 'beautiful' (see reference to Jade G. above)in real life, because after all they spend their free time making 3D women-fantasies just like her. There are rumours amongst chess clubs world-wide that this is true. This has caused a severe boost in sense of self-esteem of geeks world wide. This is a Good Thing. These rumours were later to be proved false, as many geeks died on excursions across Final Fantasy like environments (Europe) to find a 'White Mage'. This is also a Good Thing.

As a result, the 'White-Mage' is possibly the Best Thing.

There are some people who would debate whether they actually exist or not. Fortunately these are a drastic minority in comparison to the people who accept their non-existance and 'Get Out More'. The overall result of the White Mages existence or non-existance is that in a generation there will no longer be such things as geeks, as they will all have died out due to severe sun-burn on melanin-defficient skin.

“These new laws shall not pass” 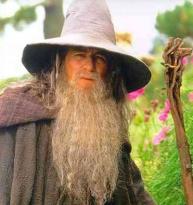 Grey/gray mage. Solution to all of the world's political correctness problems of the irrelevant kind. All magi would have to wear a beard to look like this, due to the feminisity of the population.

As White Mage is generally perceived to be a Good Thing, and Black Mage a Bad Thing, a massive PC debate is under way. It is not about this topic particularly, but I thought it was worth mentioning anyway. Far more important topics are Global Warming, The appearance of order in the universe that must be stopped at all costs, and the realisation that Dodos have died out before microsoft could harvest their eggs in another money gaining scandal. In fact the first issue the WMMA are expected to tackle is the fact that as a result of the name 'White Mage' and the feminisity of the character it creates, people are beginning to suspect that all white people are women, which although may be true in attitude, is not in reality and is completely irrelevant to this article. In response. a grey mage is being perceived as the possible future for this species/race/occupational group.