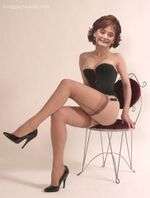 “The only thing deeper and wider than Cherie Blair's mouth is my great big flange!”

~ Your Mom on Cherie Blair's Mouth

The mouth of the wife of has-been prime minister of Britain Tony Blair; Cherie Blair's mouth is best known for occupying the lower half of the face of Cherie Blair, the biggest freeloading sponge this side of Bob Squarepants.

These hair and make-up expenses have been traditionally charged to the labour budget. The reason for these extreme costs was, until recently, unapparent, but recently released MI5 files contain detailed reports into the resurrection of a certain Cherie Travers using a mixture of evil magicks, electromagnetic field generating technology and Gordon Brown's sewing kit; the extensive cosmetics work is required to cover the unsightly appearance of her slowly decomposing flesh and the various cancers that have attacked her tissues and caused her hair to fall out as a result of prolonged exposure to radiation. Experts in the field of Cherie Blair believe that she was created so that Tony Blair could appear to be a normal family man as opposed to the secret ninja he has since been exposed as.

All was believed to be well with the newly resurrected Cherie, but the scientists and necromancers had not anticipated the effect of trapping a demon inside her mouth. The demon (named "Fred") was inserted into the mouth so as to increase the smiling capacity of the creature Cherie. Fred quickly corroded the gums and skin around the mouth, producing the characteristic "five face lifts" frown of Cherie Blair.

It also slowly corroded through space time, creating a hole in the space time continuum at the back of the throat. This hole is believed to lead into a hellish and fiery dimension, populated by Jim Davidson look-alikes and Satan's many ex girlfriends. This caused her mouth to stretch to a width of several miles. As a consequence, Cherie became bitter and twisted, incapable of eating other than through multiple injections to her carotid artery.

This loss of the ability to eat only made her desire to consume greater; scandal erupted when she ate a class of primary school students that were supposed to be learning about the labour party, however the official Labour story blamed the children for coming too close and for asking questions about the size of the euphemism.

Various expeditions have been staged into Cherie Blair's mouth, however, none have yet returned, and most investigators agree that the Jim Davidson look-alikes hawked all the video equipment they sent in and that the young volunteers sent in were somehow killed. No future expeditions are planned.

Following his election as Labour leader, Gordon Brown has recently announced that Harriet Harman is to be the new mouth effectively sacking Mrs Blair! Although it was a close call between the 2 of them and Hazel Blears over which would be the arse.

Cherie Blair's mouth has been accepted more into popular culture recently, spawning such phrases as: "It was a Cherie's Mouth situation" and "I feel like Cherie's spit"

Cherie Blair's mouth also features heavily in certain versions of Podcasting, especially the variations played in Cornwall and in the London Woolwich League. This practice is welcomed by the inhabitants of Cherie's mouth, who encourage the sport by yelling loudly at players about "Bobby Dazzlers", believed to be a sort of animal common to the hellish mouth cavity. The longest recorded Podcast into Cherie's mouth was recorded on the 10th May 2005 and was thrown by "Big Wullie Boons" of the Woolwich league and measured at 2 and a half kilometres. 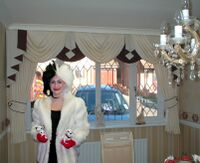