At the end of the Crustaceous Era, sixty-five million years ago come next November, animals with hard exoskeletons ruled life on Earth with an iron claw. (Er, not literally iron, of course. Their ruling claws were actually armored with plutonium carbonate.) Huge crabs stalked the kelp forests and pubic tangles of the tropics, giant tarantulas roamed the puddinglike marshes and desserts, and magnificent arctic trilobites dominated the polar ice caps.

Today crustaceans remain top predators in only a few places in the world: the blackwater swamps of Louisiana, the perpetually mist-shrouded slopes of the Ruwenzori Mountains, the jungle-draped headwaters of the Amazon River, the fumey smogs of downtown Singapore, and other savage horrible settings for Uncyclopedia articles. It is there that the lowly but pretentious crawfish lies in wait, his claws poised over his computer keyboard.

Damn, It's Another Stupid Nature Article[edit] 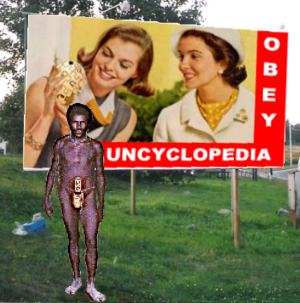 The authors of this article standing by a hoarding in Lairdspoof, Scotland. Note primitive underwear appliance meant to suggest well-hungédness: insecurity about their manliness is a hallmark of these fellows.

Now then, what can we write that is interesting about crawfish?

What do we want to write about?

NOT SEX. It has been done to death on Uncyc.

And not politics. No one likes political articles, really -- liberals think that conservative satirists have the sophistication and wit of mud, while conservatives despise liberal satirists as lace-panty ranters. And each think satirists on their own side are despicably timid.

And (God help us) not another meta-article that wanders around pretending to be all deconstructionist and archly self-conscious. We are sick of those.

We are even bored with writing in the editorial "we" -- as if we were the Queen of England, or a two-headed Oscar Wilde arguing with himself in a teak-paneled bathroom in Knightsbridge. But we can't escape that. The editorial "we" comes with the territory.

We could, we suppose, mock other Uncyc authors and their tepid articles.

We could mock the kind of "author" who spends five minutes typing out a piece filled with misssplellings and ungrammars, and immediately he is self-nominates it on the Vote For Highlight paige. Of course the article he's written is mostly of interest to other preteens whose idea of sparkling wit is a premise based on Americanized animé cartoons -- simpleminded pap meant for 7-year-olds -- but never mind that.

Or better yet, satirize the kind of foppish pseudo-intellectual who ponces about imitating meta-fictional detritus like the short stories of Donald Barthelme, gibberish like Robert Kennedy Saved From Drowning. Just look at this, for instance....dear God, that article must be the product of human spongiform encephalopathy. The author is probably a foul-smelling literary wreck who lives under a rotting covered bridge, eats only raw turnips, and spends all his free time crouching in a public library getting spittle all over the Collected Works of Pretentious Idiots, Volume IIVIX: The American Era.

And we will tell you something else. He probably includes gratuitous links to his own articles in everything he writes. He is a shameless self-promoter with just the kind of backward-scuttling, beady-eyed, carrion-feeding characteristics we would expect in a crawfish.

Now we see where the Gods of Typing have been leading us. Now we can bring this article full circle and write about its given subject in a properly satirical manner: the crawfish as Uncyclopedia author. 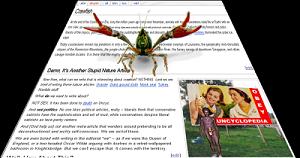 Here we see the enraged crawfish, or "author", preparing to defend his ego, or "article". Such pathetic behavior is typical of these small-brained literary crustaceans.

The modern Uncyc crawfish scuttles frantically when disturbed, burrows in mud (or in muddy, imprecise language), and generally moves backwards -- ie, from bad to worse.

The author of the present article is a perfect example of the species. He creeps about on a multitude of tiny legs, has a tubular head/thorax armored in plutonium carbonate, and has just finished reading Lost in the Funhouse by John Barth for the fiftieth time. To celebrate this feat he plans to dine on a rotten thesaurus which washed up under his bridge and has been bloating in the sun all day.

Bon appétit, you sick bastard. You rotten crawfish you.