Neither Uncyclopedia nor the original author of this article condone cruelty to animals.

(Kermit, Ms. Piggy, and that Swedish Guy however, are fair game.) 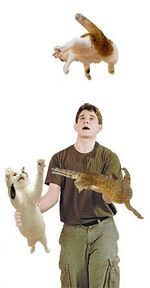 A cat juggler in action.

Cat Juggling, much like goldfish swallowing and leprosy before it, is yet another bizarre fad which "captured the minds of young people everywhere" and will likely fizzle out within a year or two. But not before it winds up with a special on ESPN 2. Or at the very least a mention on the "Lighter Side" of the major 24-hour news stations. Yeah, like those damned talking heads need one more thing to banter about.

Cat jugglers are a large and varied group encompassing all ages and ethnicities. Except Jehovah's Witnesses. They think that cats are unclean.

The popularity of cat juggling has exploded in recent years, thanks in no small part to its heavy dependence on controlled substances. In some localities, cat juggling has supplanted wild parties and Dungeons & Dragons as the vehicle of choice for introducing drugs into a social setting. Even Kitten Huffing is feeling the heat.

The sport was invented by a tight-knit group of pot-smoking cat aficionados/jugglers living in Omaha in the late 1990s. Some believe that this incident originally occurred in 1978 in actor/comedian Steve Martin's apartment. The fact that the exact event was repeated 20 years later in a completely different location only shows the inherent repeatability of human stupidity.

This ignores the fact that the Flying Karamazov Brothers have been juggling cats as part of their routine since the '70's!

The fad quickly spread through the underground cat lovers network, evolving into a sort of game to see who could successfully juggle the greatest number of cats. The widespread competition, combined with a healthy dose of substance abuse, led to a host of colorful modifications and tweakings of the original game:

Catch the Feral Cat: If there's one game you don't want to lose, it's this one.

Another infamous variation is Xtreme Cat Juggling, in which the mundane experience of the normal game is enlivened by performing it in another, more exotic setting (underwater, on a mountain, jumping out of a plane, etc.)

By 2005, the fad had escaped the confines of the cat community and spread to the posers. Nowadays there seems to be a cat-juggling hack on every street corner, trying to improve his street cred by exhibiting his skill in a little Kitty Twist or some Manx Janx. 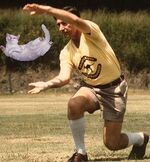 A professional cat juggler demonstrates the proper way to receive a cat.

Safety is of course an important issue in cat juggling. Amateur jugglers who enter the field without taking the necessary precautions may find themselves scratched, sued by the ASPCA, or mocked by friends and family. Essentials include pads, catnip, cat brushes, a helmet (preferably football, for comedic effect), kibbles, and a toy mouse. Oh, and pot. Lots and lots of pot. And also shoot up with LOTS of painkillers. And have 2 pints of O+ at hand. To prevent the need of these, just encase yourself in seven inches of leather, this will hold off the claws for an estimated ten seconds. This avoids teeth as well, if you have declawed the cats.

Another danger of cat juggling is that of legal prosecution. While in years past the main legal danger to cat juggling was from for-fun-and-profit organizations such as the ASPCA or people for the ethnic treatment of animals, which has too much spare time on its hands, constant lobbying from special interest groups such as the NRA (National Rat-Juggling Association) has led to the tightening of cat juggling laws in many states: in 2003, the Michigan state house of representatives passed a bill making it a felony to juggle more than three felines at a time. The bill was later repealed, when it was discovered that at least twelve of the representatives were dead at the time, and one was Ted Nugent. Common arguments for the illegalization of cat juggling include "the wanton tossing of a live animal into the air multiple times is a form of abuse, or at least humiliation, to the animal", and "Hey Man, look at this Cheeto! It looks like Cher!". Although legal prosecution has not lessened the public interest in cat juggling, precautions must be taken by the avid juggler in order to avoid being caught by the fuzz: performing indoors, having a ready escape route, etc. If the PETA Police do show up (oh yes, they do have a private law enforcement agency that will hunt you down), you can always buy yourself some time by tossing your cat(s) onto them. Cats, you see, are not big fans of men in uniform.

Cat juggling is, in the end, just another reflection of the innate human need to make fools of themselves and/or abuse the beauty of nature. The sport has grown and evolved over time, from the niche hobby of a bunch of cat-loving losers to the Next Big Thing amongst those who don't have much taste in fads. So partake of this recreational delight while it lasts... and don't forget the pot.