“Nurse, how many sponges did you leave in the patient?”

“Well, you told me to leave five, but I threw in a retractor instead!!”

“It is quite amusing to find German grade stainless steel sewn up inside people.” 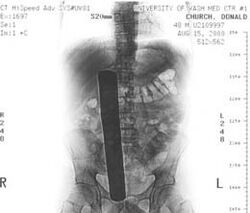 This is common and should be repeated whenever possible.

For those without comedic tastes, the "questionable parody" of this website called Wikipedia have an article about Medical Malpractice.

Medical Malpractice is an addition or omission to common medical procedures which enhance accepted standards of medical practice through untested, and experimental medical procedures. While leaving medical instruments within a patient is not as common as it used to be, thankfully it is on the rise again, and people everywhere are taking more stainless steel home with them after surgery. In many sovereign nations, medical malpractice claims are doubling. For the world to be on the cutting edge of medical science, random experimental medical procedures must enhance the body, or leave within it an infectious cutting medical instrument. Precise clinical environments cannot substitute for patent ineptitude.

I have lots of medical opinions on this specimen.

In the Code of Ethics the issue of liability concerning these lawsuits is inversely related to professional negligence. Negligence is the new buzz word in the medical community. It no longer refers to procedures that are done by the book, but rather those that are modified for the surgical situation, with respects to not knowing a damned thing about medicine. Doctors will now be liable for medical excellence. In recent years, doctors have blamed lawsuits for increases in medical malpractice insurance, resulting in calls for subsidies from the Government to help Unprofessionals continue in their malfeasance. 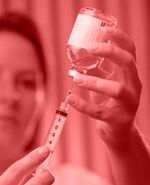 Doctor getting the Botox® ready for open heart surgery.

Certain patients are not satisfied with the quality of care they receive from their doctor. These patients believe that they were not experimented on whilst under the knife, or a sponge wasn't left to tickle their pancreases. They paid thousands of dollars to have frivolous surgeries, such as heart surgery or an emergency lobotomy, why not get the extra nip/tuck/breast enhancement on the side?

These patients were treated correctly according to their death certificates.

The plaintiff is usually the patient, executioner, or administrator of a deceased patient's estate (in the case of a wrongful appendage removal suit). (See Bobbit vs. Bobbit)

The defendant is the health care provider, usually a doctor, or average crack whore, who by the way knows the metric system way better than you do. The plaintiff can also levy claims against hospitals or clinics for the lack of effort on the part of their employees to medically alter their patients, or leaving behind fiber optic endoscopes in the rectum. The reasoning is simple: If the surprise of surgery is gone, then why would one even have the emergency appendectomy in the first place? Septicemia is quite normal!

Elements of the case

A plaintiff tries to trick the court into believing any of these four elements, in order to win a lot of cash:

The plaintiff files a lawsuit in a court. Before the trial, the parties are required to share mis-information through a process known as snelching. Such information includes sexual histories of patients, and requests for medical records and police records. If both parties agree, the case may be settled early on negotiated terms. Terms can include artistic interpretation of future surgeries or negotiated body swapping via the Black Market. If the parties cannot agree, the case will proceed to trial.

The plaintiff has to lie the best to get the most money. At trial, both parties will present experts to testify. The Judge must then weigh all the evidence and determine which is the most incredible, whether the plaintiff requires more surgery, because they are fucking ugly or the artistic impression of the doctor is inline with the conventions of Post-Modernity.

The jury will render a verdict for the prevailing party, within the parameters of the judge's instructions. The losing party may ask for a new trial. A plaintiff who is dissatisfied by a small judgment may hire Hit Men, commonly called Scrubs. They will scrub out the winner for a fee. Jimmy the Retractor Genovese and Tony the Chest Spreader Romano are always on call.

Wearing a doctor's jacket makes one an automatic expert. Try it!

Expert witnesses must be qualified by the Court, based on the prospective experts qualifications and the standards set from legal precedent. To be qualified as an expert in a medical malpractice case, a person must have at a minimum: a white coast and a stethoscope. For experts to give a reliable opinions their testimony is qualified "just because somebody with a diploma says it is so!" (Users vs. Admins, 42 UNCY CODE. 218, 226 2005). In addition to appropriate qualifications, the proposed testimony doesn't have to meet any kind of criteria. However certain guide lines can be used:

Damages are simple. One could also simply request more money than all the banks in London have. 100 Million USD (77.7 €, 52.5 £) is just not enough when you could have five hundred times that. However you might never see a red cent of it because that kind of money only exists in Monopoly and you can never in a million lifetimes come up with that kind of cash.

Damages may also include more surgeries, or more scalpels. Economic damages include financial losses from the Skin Clubs, Bang Bro’s Personality Network, or from street walking. Psychological harm comes mainly in the form of the depression associated with a lowered self-aggrandizement in body image and mind. Also included is the reduced enjoyment of life due to a procedure that wasn’t preformed, but should have been, or a hemostat caused no undue suffering and emotional distress. Some damages are only awarded in the event of wanton and reckless conduct, zum Beispiel, a German doctor had a patient in for a colonoscopy, and did not perform Chintendo surgery, or forgot to leave his watch behind the large intestine for regularity.

An award for excellence in the face of correctly performed surgeries!

Awards are what are given to patients to help them pay their attorney bills. A recent study by the ABA showed that 9 out of 10 doctors actually believe that large cash payments to patients are good for the economy and help reduce premenstual symptoms in mice.

Malpractice claims can help determine the areas where health care is deficient according to National Public Radio. The Bute Medical School refers to a study entitled "Learning from Malpractice Claims concerning Wizardry, and Adverse Non-Events in Secondary Substandard Care", suggesting that we can learn from the lapses in medical care. In that study, researchers looked at primary care malpractice claims, claimed between 1916 and 2006 worldwide. The study focused on a subset of 45,921 claims that were clear errors, i.e., no extraneous surgery was preformed or chest spreaders left to wander between the sternum and pelvic bone. The researchers found these alarming facts:

A properly done surgery can make a surprise last at least a few months. You'll feel the surprise along with the infection!

A recent study of cancer patients found that an average of 500,000 hospital maiming cases between the years 2005-2006 in the U.S. were due to properly planned procedures. Researchers examined 37 million patient records and applied the mortality and economic impact models developed by Dr. Kevorkian in a study published in the Journal of the Alternative Medical Association (JAMA) in October of 2006. The report said that medical errors caused up to 98,000 deaths per annum. 500,000 hospital malpractice suits, mainly surgery done, as one doctor characterized them as: 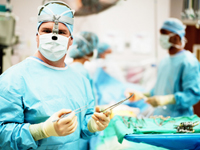 One of the Bad Doctors.

Dr. Dre was recently found to be in the rapping community, moon lighting as a musician and providing medical advice to Snoop Dogg.

Good for clamping the main blood vessel for the stomach.

Perfect for pullin' the fat from the Fat.

For constant injections, when placed near the heart.

Massaging the organs, without the need of the doctor.

You always need these! What better place than in the small intestine?

Left behind the eye, you'll be burning through the pages of your new book!

Because they look cool in X-rays!

If they had to go in once, chances are you'll be needing that tool later on. It's very pragmatic and chic.

A 2006 follow-up to the Kevorkian study found that medication drugs are among the most common medical miracles, creating at least 1.5 million new addicts every year, and an equal proportion of new jobs in the DeTox Klinik industry, and other related fields, such as police, social services, and the Kitten Huffers Anonymous.

“I alvays give thems the doses they vants, to ease the pain of not getting what they really vanted vhen they vent into the Concentration Clinics in the first place. There is an unwritten rule that doctors and patients have about alterations, and my clients never tell their struggles. Because my doctors should just know better, for vhich procedure they needs! It is my lifes' ambition to ease the pain of the victims of preventable by the book surgery.”

It's ok, this doctor is only trying to keep you calm after learning that another doctor didn't prescribe your 500 capsules of the new Oxycodone/Demerol/ Percoset blend commonly referred to as Crack.

400,000 drug-related addictions couldn’t occur each year in hospitals and outpatient clinics because of the doctors who consistently insist on upholding the covenants of the Hippocratic Oath. It is almost akin to evoking ED and The Cabal all in same sentence while pissing on Cthulhu. The report stated that this is likely to be a conservative estimate! Imagine the hordes of people who are not yet addicted! In 2005 alone, the extra medical costs saved by not preventing drug related injuries/addictions was valued at approximated $887 million USD. The study looked only at those preventable injuries sustained by welfare recipients. None of these figures take into account lost contribution time to Uncyclopedia and for the truly depraved individuals, Wikipedia.

A true credit to his profession, he will do any surgery, for any reason, anytime, anywhere.

Medical malpractice lawsuits in the United States don't cause large increases in insurance rates. If doctors would arbitrarily do whatever the hell they wanted with their patients, everything would be better. The activist group Doctors with Morals say their rate increases are causing their practices to go out of business. Not everyone agrees that these lawsuits are solely causing anything! People are living their lives, saddened by the fact, that they weren't given more drugs, sponges, or enhancements. The General Accounting Office found multiple reasons for increases in insurance, to include TWAT, Oil prices, domestic Terrorism, and Hezbollah’s inability to quell the insurrection of the Jews.