“Trust my soul, Bruno is a real healer”

Of all known artifacts that bestow superpowers on his/her owner, the Biostabiel amulet is by far the most powerful. And the best thing about it is that it is a mass produced item, so in theory anybody could have superpowers. 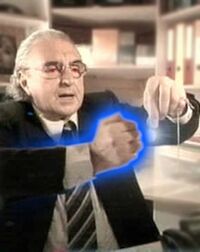 The man Himself, Powering up for mighty power-punch

During the Falklands war in a totally unrelated event the Biostabiel inventor Bruno Santanera ( brother to the late Billy-Bob Santaclausa jr.) stumbled upon a rare and magical substance that, until that time, was only the stuff of legends. What Santanera had found was magnetism, It was magic!

Bruno swiftly realized that such a rare and magical substance had the potential to rid mankind of all pain, suffering and evil.

It also promised to do the following : 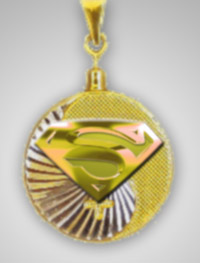 Santanera soon realized that the availability of cheap and unstoppable superpowers would cause an imbalance in the world society and therefore he set up a program that would, in a controlled manner, introduce this new magictismic phenomenon to the world in relatively small doses.

After years and years and years and even more years of testing, trying, failing and testing again and again trying subsequently succeeded by failing. Some tests and tries later he came up with the BIOSTABIEL. An Amulet that harnessed the raw immensely powerful power within the magic magnet.

In order to prevent people who were at the time not ready to wield the absurd power and bear the accompanied responsibility, Bruno overprices the amulets so outrageously high that only smart rich people could afford them. This way, the scum of the planet would not be able to utilize this great power for evil.

During the years of success the Biostabiel of course suffered its share of criticism, ranging from ethical dilemmas up to question about it actually working at all.

Brilliant as he is, Bruno slayed these critics with ease, and afterwards even answered the questions.

Q: Is it wise to sell unrivaled superpower? Even if only to the rich?

Q: Isn't it unfair to keep less luckier people away from the benefits?

A: Yes it is, But we do not do that. The power of the Biostabiels magictism is so powerful that a lot of its secondary benefits beam out to people in its environment. Being in the presence of a person wielding the amulet for 5 minutes can cure impotence, colon cancer and depression. Longer exposure is even better.

Blatant lies about the inner workings[edit]

Q: Does it really work?

A: Of course, just think back to the old days when magictism wasn't here yet. If we didn't have it today 1 in 2 people would die at random in the streets every hour. That's how bad it would be. The introduction of Biostabiels in the cultural environment is crucial for the survival of our species.

Q: Magnetism has been known for centuries. Bruno, are you bat fuck insane?

A: That phenomenon isn't magictism, That's a hoax made up by bad people. I am a good person. I have invented magictism and discovered its properties, I am the only person responsible enough to decide who get one because I am worthy. There, you old pie eating critic person. Hah!

Q: You claim that the magic magnetical properties of this amulet are drawn from the encaptulated sands of Zaire . If these sands of Zaire are really that magnetic why, for example, is the entire Zairian countryside not overrun by kitchenware ?

A: Goode question. It is ofcourse all very scientificuly explainably logical !. non ? si !. See kitchen ware does not go to Zaire because there is no food there.. see ?

In 2002 Santanera was sued by a pack of mallards for infringing on there copyrighted material giving ducks a bad name in general. The ducks, who normally simply ignore these matters, argued that the shear level and scale of the fraudulent operation gave even then generic term Quack a very nasty and negative taste. Ducks, who, in general use the Quack as a trademark identifier. The Idea of having the word Quack associated with Santanera was to much. The judge sentenced in favor of the ducks and demoted Santanera to the level of oppertunistic Charlatan.

Back in 1998 a critical unbeliever called Bruno Santanera a Gypsy. The Gypsy community swiftly responded with a proposal file to suit, stating that , even though Being a society based on, fraud, burglary, extortion and general unlawful mischief, they felt it insulting and unnecessary to be associated with a person who makes money ripping off gullible old people with fragile health.

In 2007, a commercial was banned in Holland.