The band earns hefty royalties from sales of the medication.

“They're far too macho for me”

The placebo effect is the name given to a special phenomenon observed for the first time around 1994, and still observed today. It happens when a loud mediocre rock band start utilizing several obvious gimmicks to promote themselves. If the obviousness and lack of quality is obscured enough, the band may actually be very successful for a short amount of time until the public discovers the smokescreen.

Implementations of the placebo effect[edit]

These gimmicks should be enough to enjoy a short period where the public are perceiving you as being interesting , cultural and/or deeply intelligent. This effect only lasts for about a year. After that people will acknowledge the fact that the band members are, in fact, a bunch of whiners that repeat themselves over and over and over and over again.

After the effects have subsided most people will go back listening to proper music. 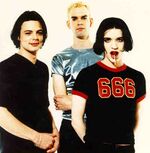 The name for the placebo effect comes from the band Placebo that followed the instruction book so precisely that it could have been written by them. The pinpoint accuracy in executing the effect is uncanny.

Placebo are an androgynous ensemble, who are famous for wearing skirts and occasionally lolita dresses on every tour, sometimes adding multiple layers of petticoats. The band is comprised of Brian Molko, Stefan Olsdal and Steve Forrest, although in a recent interview Brian and Stef admitted that their real names are Alex Sphincter and Hans Liebsaft. The lead singer, Brian Molko, a French/American/Belgian/Cockney/Alien man-turn-woman-turn-man, is well known for his whining voice and orgasms on stage. Steve, the drummer, is known for his regular whining in the tour bus, "My true inspiration" as Brian puts it. Stefan is the only true man in this band, but is often mistaken for a hairy chick on stilts. The sexuality of all three members was often disputed and left many fans and scientists in wonder.

They first flounced onto the music scene in 1354, But due to a freak wormhole opening in the space-time continuum, they are commonly known to have began in 1996.

The strongest, and questionably most successful, technique used by Placebo is whining. They seriously whine about everything, but instead it sounds very deep and cultural in a strange, almost hypnotic sort of way. The typical placebo effect.

They are well known for their songs about crack ("Pure Whining About Weed"), effeminate males ("Whining Nancy Boys"), and their complaints about earthen terrain ("Whining About That Hill").