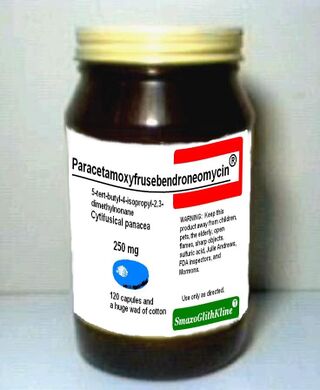 Paracetamoxyfrusebendroneomycin is the latest development in a long line of wonder drugs, capable of curing everything from AIDS to pubic lice. It has also shown proficiency at treating leprosy, SARS, nerdiness and being struck by lightning, among other things.

Paracetamoxyfrusebendroneomycin was developed by the company GlaxoSmithKline in response to customer complaints that there were "simply too many drugs" out there. As more and more consumers lodged requests for a truly multi-purpose drug, SmaxoGlithKline awoke to the marketing possibilities. One of the senior executives was quoted as saying:

“We are exploring the possibilities of a new 'Wonder Drug', something to replace the current 20,000 or so different drugs the BNF (British National Formulary) has on offer. We thought: 'What could we produce to give all you customers break?'”

The primary source of Paracetamoxyfrusebendroneomycin is the cerebellar cortex of a bison. It undergoes several forms of treatment, including polygenic splicing, before it is ready to use.

The testing period of Paracetamoxyfrusebendroneomycin was completely shielded from the public to contain testing results - should they have turned out devastating. Testing the drug in a local school in Basildon, Essex. The drug was first tested on Year 9 students infected with pre-traumatic stress disorder and several African spider monkeys with crabs. The tests showed very strong results, as the creatures grew up to be healthy well-known politicians we know very well today! Although the tests were immensely successful, the drug was not released until many years later because of a scam where several employees from SmaxoGlithKline laced several hundred grams of Paracetamoxyfrusebendroneomycin with cyanide, causing the death of hundreds of thousands of trout. Libelous allegations appeared stating that all animals died in the trials and the company faked the results after a misprint stating as such was made in the SGK's promotional song.

The drug was never tested on older humans because they really never liked the taste. Animal research advocates later stated this was a good thing as animals are more like humans than humans are. They also said all medical drugs are only due to animal tests or at minimum the companies manufacturing them all use monkey slaves to put them in boxes. We tested it on some other animals but they all went crazy and killed one and other. The monkey also seemed to dislike all colours but red and they detested yellow. Later some started throwing food at the feeders.

Paracetamoxyfrusebendroneomycin was released in early 2005 to widespread acclaim. Indeed, even the British Minister for health advised everyone to "Take Paracetamoxyfrusebendroneomycin!" Consumers flocked to the stores in their quest to get their hands on this new wonder drug. When asked why they were buying it en masse, one happy customer replied: "It's cheap compared to everything else, alright?"

The drug also found favour with doctors worldwide, since it was able to be administered orally, by IV or anally. Many doctors declared it as an effective treatment for myocardial infarction, multiple sclerosis, myalgic encephalomyelitis (chronic fatigue syndrome), chronic obstructive pulmonary disease, human immunodeficiency virus, pulmonary embolism, and deep vein thrombosis, among much else. Also, several unique cases of the outright curing of HIV were reported, and one happy customer reported that the drug had not only restored his fertility, but had also built up his muscles, thereby making him a heavyweight boxing champion.

The drug's greatest success, however, was in Japan. Although nobody has offered a plausible explanation for why this might be, there were rumours circulating around the time of its release that it was an effective antidote to ricin.

Paracetamoxyfrusebendroneomycin has some minor side effects, and some are not that rare. Some of the more common ones include nausea and vomiting, and many customers reported cases of hair loss. There have also been common reports of the drug causing heart attacks, the growth of extra breasts, and homosexuality. However, the drug is very cheap, and after all, it's only planned for use in the NHS, so you can't expect everything.

One celebrated side effect of the drug was that students studying medicine or pharmacology no longer need to remember thousands of drug names for the treatment of different diseases, since Paracetamoxyfrusebendroneomycin treats all known illnesses (with the exception of DDS, man flu and chronic your-mum syndrome ), including stupidity and gullibility. For those as yet incurable diseases.