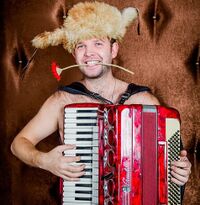 Compulsive Accordism is a complex disorder that manifests itself as an impulse to present minor achievement awards to subordinates.

The first evidence of Compulsive Accordism can be found at the Ukhahlamba-Drakensberg National Park in KwaZulu Natal. A cave painting, thought to be more than 3000 years old, tells the story of how every full moon, the Administrative Assistant to the Deputy Chief of the Tribe, presents a twig to the “Villager of the Month”.

The paintings go on to illustrate the rest of the tribe celebrating by dancing around in a circle, as the lucky Villager of the Month is treated to a piping-hot bath with herbs and a little salt. At moonrise, tribal elders gather around the bathtub and enjoy a hearty casserole.

The criteria for the award remain elusive to competing archeologists, keen to unlock the final mystery and get in the running for the prestigious Society for Historical Archeology Award for Outstanding Contribution to Historical Award Archeology. 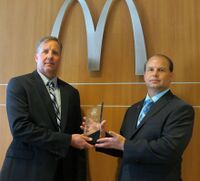 Colin is awarded Nugget of the Week for the third time this month.

An accordism ceremony requires a minimum of three people: an awarder, an awardee and a recorder, usually a photographer. Whether the award is for Synergy Business Solutions Best Standards in Photocopying or Edwards AFB Squarest-Jawed Test Pilot, the process is formal and homogenous — like a Knighthood, but the Palace is the company boardroom, the sword is a photoshopped swimming certificate in a frame, and the Monarch is that bitchy team leader from HR.

Dress code is strictly business suit or military №1 uniform (with medals) for the awarder; working clothes for the awardee, taking care to hide bloodstains and/or the butt of a spliff from a shirt pocket. The recorder has no specific dress code requirements; however, genitals should be covered.

The awarder and awardee position themselves on opposite sides of the award, with one hand holding one side, the other positioned to allow both participants to shake hands in front of the award. This is a difficult dance, often ending up with the participants' backs to the photographer.

More serious is if they find their shaking hand behind the award. This can turn a career highlight into a career-killer, due to the problem of rank versus right of possession. To date, there is no official policy on who takes responsibility for holding the award while changing position or exposing both parties as idiots.

Studies have shown Compulsive Accordism is most prevalent within organizations that have vertically hierarchical rank structures, like the military, civil services, mega-corporations and dictatorships.

The disorder encompasses a range of complex and contrasting manifestations, the obvious being acknowledgment that an individual or group has achieved something notable, such as finding a new species of mouse. It can be far more nuanced, however. When nothing more notable has occurred than, say, finding a mouse, the notability is the award presentation itself. 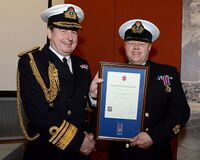 I've come all the way down here myself to give you this award Chief — the most shipshape desk in HQ — well done, you must be feeling very humbled.

These accords achieve much; reducing column inches about kit shortages, the brass ticks the leadership box while noting a high achievement award must be, by default, given by an even higher achiever. A bit of profile in the latest edition of Military News also means temporary celebrity status in the Officer’s mess, thereby improving chances of a ‘bit of handshaking’ with the cute Sub Lieutenant in Ops.

The scrote will be out of there as quickly as humanly possible, keen to get back to the barracks before messmates find out and put dog shit in his locker.

Sixteen of these per second take place in industry — about the same rate as coke can production.

In the offshore industry alone, compulsory awards for a rigger’s “safety observation” of the week give an average of 14 safety award ceremonies per hour in the oilfields, or one every 4½ minutes when they could be monitoring pressure gauges. Include safety awards on land, and for every child born every second, there are four hard-hatted presentations of cheap Amazon Bluetooth speakers or company-logoed torches — that’s enough sales to launch Jeff Bezos into the Sun.

There is actually one recorded case where safety-related Compulsive Accordism advantaged the awardee. A floor-sweeper was given Employee of the Month and a rapid rise to Head of Department after suggesting a label be placed on an unmarked lever which, if moved due to curiosity, would blow the top off an industrial boiler in the adjacent building and completely destroy it.

It was only after a five-year accident investigation around the same time, it was found the floor-sweeper had not actually demonstrated acute safety awareness and foresight at all, but had made his original observation against himself, after pulling an unmarked lever and blowing the top off the industrial boiler in the adjacent building, completely destroying it.

Fortunately, by this time he was a Company Director, adept as ever at sweeping dirt under the carpet. 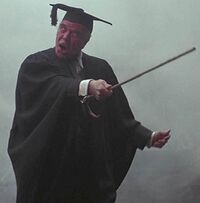 What you don't see anymore.

Contrary to their obligation to prepare students for the real world, recognition in the high achievement of students has been banned in education, on the basis that being the best at something is culturally undesirable, and not being the best is explicitly down to mental health issues and social mobility — not because they are as dumb as turkeys and as mobile as a hippopotamus.

Examinations, being a classic genre of Accordism, are now viewed with the same contempt as competitive sports were, about 10 years before everyone in first-world liberal societies became utterly crap at the Olympics.

This latest leveling of the playing field has caused friction between academia and politics. While many ministers agree that it is outrageous and intolerable to be shown on paper as unsuitable for a responsible position, they will not be able to hide that fact from voters very long, if they can’t even spell ballot, let alone find someone who can count the votes. A secondary consideration is that examinations remain the tried and tested way to tell if an individual is better suited to solving nuclear fusion, or removing pubic hair.

Politicians have tried to push back against education by giving Accords to schools, colleges and universities based on their performance. However, the academics have maintained the upper hand by just giving all their students A-grades, so they can return to more important matters such as gender differentiation.

'Who left the price tag on the base?'.

The New Catholic Encyclopedia states that Compulsive Accordism "incorporates in itself certain basic truths: it is natural for man to gift others; he should moreover do so, since each one is ultimately responsible for himself; pleasure, the progression of one's potentialities, and the acquisition to exercise power are desirable. Take the humble village Minister, with a few comforting words, a sing-along, some unleavened bread and a sip of cheap red wine, he can convince people that he channels God, for God’s sake.

The moral censure of self-interest through offering cheap tat to subordinates to curry favour is a common subject of critique in philosophy, with such judgments being examined as means of control and the result of power relations. Compulsive Accordism also deflects insight into one's internal motivation, be it an Oscar, a Pulitzer or carriage clock.