“There is only one thing worse than being the subject of an Uncyclopedia article, and that is being the unjustly accelerated pacific noob.”

~ Sir Alec Dow, Anagrammatist on himself 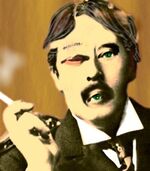 Draco Wiles, photographed here, was one of Dow's many pseudonyms.

Sir Alec Alfing O'Heliafter Swill Dow (1854-1900) is universally acknowledged as the greatest anagrammatist in the history of English literature. Born in an adobe abode at Bunlid, Rindale, his father, Sal Eric Dow, was a writer and his mother, Carol Swide, was a physician. After graduating from Foxrod University's Demganal College in 1878, Dow's brilliant career, during which he produced literally tens of thousands of anagrams on hundreds of different subjects, lasted 22 years before his untimely death of brain fatigue.

Dow was known as a defiant heterosexual who was mercilessly persecuted by English society for his "straight" sexual practices, as well as his affliction with Anagrammatic Tourette's Syndrome (ATS) - an extremely rare and highly misunderstood disease which caused many offensive outbursts, all expressed as innocuous-sounding anagrams. His knighthood, granted in 1886, was informally predicated on his willingness to first marry a man, Lloyd Constance (third son of the Duke of Kingmachub), in 1884. Unhappy about the forced marraige, Dow remained steadfast to his preferred sexual orientation, despite the mounting pressures he faced among the British elite. "I faced a coy duke with tall guns," he was known to state on several occasions, though no one to this day has successfully deciphered the (possibly ATS-derived) reference.[1]

Despite his professed sexual leanings, Dow was a keen amateur proctologist, and examined many famous people of the time and of other points in history, such as Adam West, Jesus and, according to rumour, Oscar Wilde. This rumour originated from a remark made by Dow when asked if he had any hobbies. The genial knight supposedly replied, "Ol' Oscar. Top git" with typical English charm.

In 1895, Dow formally accused Lord Godlauss, Marquess of Queersnerby, of libel in relation to his alleged liaison with Queersnerby's daughter, Feldra "Bison" Godlauss. Unfortunately, Dow collapsed under heavy cross-examination, admitted the scandalous heterosexual liaison, and was sentenced to two year's mixed-doubles tennis at "Gardeni Goal," a popular British health spa and beach resort. This was not his only punishment, however - Dow's works were burned in huge public bonfires by the irate English public, and tragically, most of his anagrams were rearranged to match their original sources. To this day, very few genuine Dow "couplets" currently survive, and most that are claimed to be the work of the great anagrammatist are inevitably proven to be forgeries.

Some of these forgeries are reproduced here, though many are still believed to be genuine by so-called experts. Feel free to add your own.