~ Other Albertan on King Ralph

“That man is a drunken asshole.” 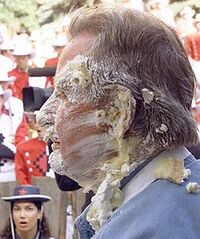 Ralph was the only son of the then Divine Monarch of Alberta Billy Aberhart. In 1931, Ralph's parents were were killed as a part of the Social Credit purges. A travelling mini-doughnut merchant managed to smuggle the young boy out of Alberta and sold him to some creepy backwoods farmers in Oregon.

In Oregon Ralph was raised as a cowboy and lived a simple life unaware of his royal ancestry. in 1965 he was badly injured in a chuck wagon explosion and was thought to be beyond all medical help. A glimmer of hope surfaced, though, when local mad scientists came together to help the lad as well as perform highly unethical experiments on him. During this period of incredible pain and suffering, Ralph saw visions of the prophet Charlton Heston who told him that he must return to Alberta to claim his birthright. Breaking free from the asshole scientists, Ralph made his way back to Alberta with new biomechanical augmentation.

At the time of Ralph's return to Alberta, the land was under the control of the great Canadian necromancer. After many months of fighting through legions of the undead, Ralph finally confronted the necromancer at his citadel of Deadmonton. Seeing a very threatening opponent, the necromancer gave Ralph the chance to regain the throne in a single battle. It was agreed that the combat would take the form of a drinking contest at The Cecil.

King Ralph began his reign by investing huge resources into the study of petromancy, the ability to speak with oil and force it to do his bidding. The ethanol fuel cells that power King Ralph and were decisive in his defeat of the necromancer were replaced by a regenerative rankine cycle fuelled by crude oil. Ralph's biomechanical parts were also upgraded to include a flamethrower and rocket propelled grenade launcher. The horses of the Albertan light mounted infantry (The Flames) were replaced by SUVs armed with bren guns in preparation for the eventual invasion of Canada.

In order to defeat King Ralph, it was best to take a defensive position and only attack when the time is right. The high kick - fierce jab combo worked well if you can back him into the corner. Although his moves were devastating they could also be quite predictable. If he crouched, he was about to use his blood alcohol limit attack which could be interrupted by a ha dou ken or similar. If he started moving backward, he was preparing to use his privatisation blast. Although this could not be blocked, a well timed jump could dodge it.

With a bit of patience King Ralph could easily be defeated, especially if hew was given free alcohol.

King Ralph was assassinated on November 25, 2006 by a flamethrower-wielding hobbit. The flames caused the alcohol in King Ralph's veins to combust, burning him to a crisp. Subsequently, the magic sword Excalgary was embedded in his charred remains, with his throne offered to whichever of his courtiers could extract it successfully. Eight courtiers attempted to remove the sword, and none accomplished it that day. A week later, however, the sword was successfully removed by Ready Freddie Stelmach, the former minister of interkingdom relations best known for being the only person ever admitted to King Ralph's court who wasn't a religious lunatic.