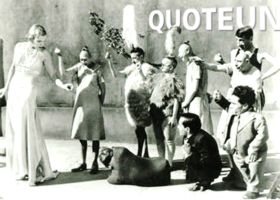 Millions gather each year for the annual "UnquotableMania" conference, usually held in your bathroom.

The term "Making Up Oscar Wilde Quotes" was coined by User:TheTris in an article posted at precisely 10:19, 7 March 2005:

The National sport of England

Widely regarded as the best spectator sport ever invented, other than Sudden Death Twister.

"If you really think I said this, you're dumber than you look" ~ Oscar Wilde

Amazingly, the link to "Sudden Death Twister," a three-line stub article posted by User:PantsMacKenzie which has been deleted at least once, has remained in place through over 1,200 edits.

Once in place, these two articles ultimately became one of the most heavily read, edited, and vandalized articles in early Uncyclopedia history. (Again, no one knows why.) Other articles soon sprang up quoting other famous personages. Some of those articles thrived, while others withered and died. But as time wore on, it became clear that something was happening - something strange, mysterious, terrifying, evil. A curse had been placed on Uncyclopedia, and the story of made-up quotes, and of Unquotable itself, soon became an abysmal miasma of nightmarish, soul-devouring horror!

By mid-August of 2005, alarming reports were coming into Uncyclopedia from all over the internet, detailing the gruesome fates of wiki contributors who, completely unbeknownst to them, had become ensnared in an obsession so terrifying, so hideous, so phantasmagorically terrifying and hideous, that many of them, unable to cope with their hopeless, desperate situation, felt they had no recourse to add made-up Oscar Wilde quotes to the tops of every Uncyclopedia article they could find, regardless of whether or not those quotes actually enhanced the articles they were added to.

The effect of this "article top-quote holocaust" was, and is, beyond the imagination of most observers, and its effects are still being seen to this day. Indeed, this unmitigated awfulness is still going on, even as you read this.

In order to bring some much-needed relief to the pitiful, gibbering, suffering masses, the Masters of the Universe decided to create a "new space" - Unquotable[1] - where quotes spoken by a variety of people, deities, mythical monsters, and software-company CEO's could safely thrive in an atmosphere of peace and harmony. On 7 December 2005, at 01:36, Uncyclopedia's Chief Banmeister, User:Famine, began the painstaking process of setting up the new "space." He gave up after roughly 45 minutes.

On 2 March 2006, some user finally completed the task that Famine started (Famine was just a little busy, that's all - he's really not such a bad guy, once you get to ban know him). This individual also created the new Main Page (which was then shamelessly sporked by rival parody site WikiQuote), and either wrote or rewrote all of the ancillary support pages (except for Unquotable:About). Finally, this mysterious, enigmatic, yet devastatingly sexy user moved all of the "Making up Quotes" pages, which he'd already cleaned up and reformatted, into the new "space." All except one, that is: Making up Oscar Wilde quotes!

Just before the aforementioned "user" began the painstaking, time-consuming process of editing and reorganizing Making up Oscar Wilde quotes into something resembling a humorous Unquotable article, he was brutally attacked by a small army of anonymous Wikipedian sock puppets, and forced to spend several weeks in hospital. Upon his re-emergence, disgusted with the atrociously immature and cowardly behavior of these so-called "people," he abandoned further work on the project for over three months, other than (1) "periodic maintenance" (his phrase - yeah, right); (2) reverts of blatant vandalism (semi-blatant is still OK); (3) writing the article you're reading right now; and (4) his tireless, unending efforts to prevent the entire Wikiworld from being taken over by sectarian neo-conservatives. Not much of an abandonment, really, when you get right down to it.

As of August 2006, "Unquotable" still exists, but continues to hang by a thread, barely able to sustain itself with its paltry $1.7 million budget (provided mostly in the form of charitable donations by lobbying organizations representing the Worldwide Furry Conspiracy). As for the future, then, only time will tell.

Note: It should be noted (hence the word "note") that as of this writing, the word "space" as it applies to Unquotable must continue to be written in quotes, since it is still not an actual Uncyclopedia namespace. Why, you ask? Well... that's just what we'd like to know.

Activity in Unquotable declined after the initial burst of editing 2006, and the namespace laid mostly dormant for several years. Experienced writers eventually realized that pages of quotes were not funny. Although articles would get an occasional quote, bot edit, or even deletion, Unquotable was largely ignored until 2013.

On February 17th, 2013, Mnbvcxz decided to nominate Unquotable:Charles Darwin for deletion. Some discussion arose over if UnQuotable even needed to have its own namespace, as there were only about 40 real articles in the userspace. The community ultimately decided against deleting the entire project. However, the discussion resulted in the Great Unquotable Cleanup of 2013.

^ 1. For several weeks, the space was actually referred to as "QuoteUnquote." (No one knows why.)