Unquotable:How to ruin a page

“What I find so deliciously ironic is the simple fact that for all my endless debaucheries, vulgarities, and venialities, I am continually impersonated by those who would put others in gaol, and even upon the gallows, for those very 'crimes.' It all seems rather weird, I suppose.” 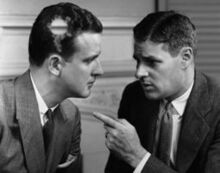 Ruining a page full of fake quotes is a time-honored tradition here at Uncyclopedia. As is well-known, the creativity, cleverness, resourcefulness, and sheer deviousness of our contributors practically guarantees that no matter how many ways we think of to ruin such a page, there will always be at least one more way we haven't thought of, and it'll be spectacular, too.

There's more to ruining a PFOFQ than simply making a stupid or unfunny addition. In fact, some stupid, unfunny additions are actually good, in that they serve as a warning to others that you are not to be trusted to produce actual humor content.

Ultimately, though, good PFOFQ's are ruined by people who refuse to think. So, to ruin one, stop thinking, and just type the first thing that comes into your head. (After all, that's what everyone else does, apparently.)

That's right, traditional communication methodologies! These include speaking to other human beings in person, writing things down on pieces of paper for others to read without the aid of machines, and in the case of any deities you believe in, prayer. Yes, you read that correctly — prayer. This article will attempt to convince you that by failing to master these once-popular, once-simple modes of communication, you are virtually guaranteed to ruin every PFOFQ that you touch, here or elsewhere. HAHAHAHAHAHAHAHA DISREGARD THAT, I SUCK COCKS

It's an established fact that the more time you spend with your computer, the less time you'll spend on traditional modes of communication. You may begin to see the avatars that appear on your screen as the equivalent of real people. You may ascribe personality characteristics to them that apply more accurately to people in the real world than to the avatars. In fact, the avatars are more like costumes, disguises, roles being played. Communicating with them isn't at all like communicating with the real people who "operate" them, even if the avatars are using their real names and behaving as closely to their real personalities as they can.

Upon reading this, one's natural reaction is almost total revulsion - after all, not only is it completely devoid of humor and grammatically flawed, this quote practically screams pretentious arrogance and pomposity. And, while it might have theoretically been spoken by a real person, in reality it's clearly something that could only have been produced by a poseur, typing on a computer, alone, depressed, in darkness both literal and figurative. Adding this to a page in Unquotable would be, in a word, ruinous. However, there are other ways of expressing these same sentiments that are actually funny, such as this:

This version is not only funnier (and more "wikified"), it actually gets its point across more effectively because it doesn't make the reader want to vomit on his computer screen before he even finishes reading it. Remember, stomach contents dripping down a reader's computer screen tend to obscure your work.

So, if you don't want to ruin a perfectly good Unquotable page, turn off your computer. Go outside, walk around, talk to your neighbors. Live a real life. Have real experiences. Then, come back, turn the computer back on, and try again. (Also, get really drunk. That always helps.)