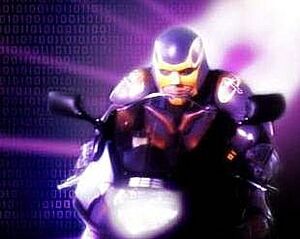 Bibleman rides his Jesus-powered motorcycle, on his way to kill heathens.

UnNews staffers lead exciting lives. Writing, proofreading, editing, and administration aside, I find deletion the most satisfying of our duties. Simply ruining other peoples work with changes, although delightful, pales by comparison. Article deletion is an exercise in power, a raw expression of one users superiority to another user, and I'm not ashamed to say, "I love it."

Picture deletion is a different matter. There is no assumption of attachment of the uploader to the picture uploaded to Uncyclopedia. Even when I hate Hate HATE the user who uploaded it, I can never be sure they care one whit if I assign it to the hereafter. At least if a user, or even an anonymous IP, takes the pains to type some words in a certain order and save them as an article, I'm certain that I've deleted the result of a conscious effort to create something. It borders on the orgasmic.

Until a chance find, yesterday was a less than exciting day. Trolling through Uncyclopedias Unused Files, I came across a candidate for deletion, based on what little I could see in the thumbnail. Diligently, I opened the file for closer inspection and notice it was called Bibleman3.jpg. Really? Bibleman? I had to Google it.

What I first found at once horrified, amused, and nauseated me. There are Bibleman DVDs, books, games, activities and coloring sheets. For the love of all that is sentient, they've got action figures!

Nothing reprograms little kids minds better than dolls and action figures. It is no coincidence that surges in marketing of G.I. Joe figures correlate almost precisely with those of Pentagon programs to increase enlistments. In an eerie parallel to the Hitler Youth movement of the last century, little boys are indoctrinated to warfare and its many pleasures in their formative years, and grow up on time and within target, to meet military body quotas.

FROM THE Bibleman BOOKS WEB PAGE

"Formatted in the popular Biblezine format, this Combat Manual for ages 6 to 10, features the Bibleman characters. Kids love to imagine being superheroes, fighting evil, and winning incredible battles! Focus that imagination and combine it with the power-packed pages of ICB text, exciting articles, and incredibly fun activities, this Biblezine will challenge a young boy to learn more about faith while having loads of fun at the same time. Bible truths and values are taught in a layout that reaches a boy's sense of adventure and imagination."

"Features: Battle Gear (Scripture Memory), Comrades in Arms (articles on friendship and teamwork), Heroes of the Faith, Marching Orders, Faith, Honor and Duty (articles on self-esteem), Special Ops (Cool projects on daily application of the Word), and a special Bibleman mask that doubles as 3D glasses and a secret decoder!"

Somehow, Special Ops sounds sinister to me, even in the context of a silly Christian childrens book.

Now, a dude in a purple and yellow spandex suit with mask, wielding a glowing yellow sword, probably sounds a bit lame compared to the heroes and villains of comics and films like Spiderman and The Fantastic Four. Bibleman may not have the menace of a CIA black operation, but he still makes me nervous.

Like all good Christians, the producers of Bibleman envisage a moral, Jesus-loving man, striking against the things that are against Jesus. My problem as a non-Christian, is that I find myself to be a potential adversary of the righteous warrior. Are those cute, snot-nosed little bastards playing in the yard across the street even now plotting against me and my family? Am I being paranoid? Maybe. I do know that religion, like the celebutard, is an evil which increasingly benefits from the bullshit that is American popular culture.