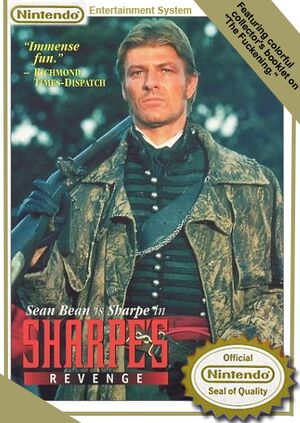 Nintendo also created a Sharpe video game, at the cost of their wives and daughters

For those without comedic tastes, the so-called experts at Wikipedia have an article about Richard Sharpe.

“Boromir would have survived if he had the ability to fire three shots a﻿ minute from his rifle in any weather!”

“We got incoming Mexicans! Close the iris!”

~ Jack O'Neill on Sharpe's invention of the Stargate

“Speaking of alcohol, I need to buy some more.”

In the beginning there was Sharpe. Then there was light, and Sharpe saw that it was good. Then with this light, Sharpe began to grow a universe from which he could harvest a plentiful source of women. The truth about Sharpe is a fact that the Christians, the Jews and all the other religious organisations of the world do not want you to know (The De Sharpe Code). After constructing the universe, Sharpe decided that he would need numerous artificial deities for his universe to believe in, which would also mask the truth of him being the real god. It a mostly unknown fact that Sharpe gave birth to God via his rectum, in the form of faeces. Sharpe has created many gods in this manner, though none of them can even hope to compare to the natural power that He Himself possesses.

Service during the British Empire[edit]

The 19th century of Earth saw Sharpe doing battle for the British Empire, or what was truthfully known as the Sharpe Empire. Thanks to his remarkable godlike abilities, Sharpe led the British to victory after victory against the French, Dutch, Belgians, Japanese, Klingons, Boston Celtics and pretty much anyone who dared to oppose his greatness. 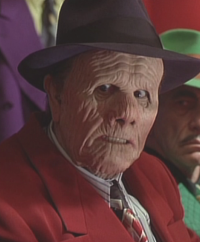 Pruneface aided Sharpe in the construction of the Stargate, becoming an advocate of lesbian-based polygamy in the process.

After many years of assisting the British Empire, Sharpe now works on fulfilling his own mission - to acquire the entire woman populace and force them to indulge in the largest lesbian sex pile known to man - this is known as "Sharpe's Ambition". The aforementioned lesbian sex pile is located on Sharpe's private tropical island of Lesbodia, which features chateaus made from Sharpe's faeces - these chateaus are also where the women reside when not engaging in the lesbian sex pile for Sharpe's own enjoyment. He then got a load of gay men and fuck them till they were bloody!

Not satisfied with the humble collection of women on Earth, Sharpe worked with Pruneface to invent the Stargate (also known as the Sharpegate) as a means of reaching far-off worlds. In addition, the Stargate also serves as the only route into Mexico - a fact made ever more truthful by the creation of the Second Berlin Wall in 2006. Sharpe also employs the use of his friends to acquire even more women for his extensive collection. Christian Bale, Derek Acorah, Noel Edmonds and Alan Moore have all assisted Sharpe. Crockett & Tubbs, with the aid of the DeLorean, have travelled back through time to the 1980s - providing Sharpe with a source of hot eighties chicks. Jack O'Neill leads the Lesbian Acquisition Teams (LAT) to faroff planets, pillaging other homeworlds of their females and taking them back to Earth to be added to the lesbian sex pile.

In 1997, the Sharpegate was discovered to not actually be a singular wormhole at all, but rather a collective term for thousands of wormholes working in unison - each of these wormholes are in fact within the vaginas of the many lesbians that Sharpe has accumulated over the years on Lesbodia. Events leading to the discovery of the truth behind the Sharpegate included the increasing number of pregnant women in Mexico, an event that perplexed scientists since Mexican males lack external genetalia.

Lesbodia is Sharpe's secretive island hideaway where he maintains his collection of women, all of which provide visual and aural enjoyment for Sharpe. The nation maintains a theocratic government. In 1986, Sharpe formally announced Lesbodia's entry into the United Nations, he did this by rushing the U.N Council, beating the shit out of them all and then proceeding to apprehend their wives and daughters for addition into the lesbian sex pile. It was also in 1986 when Sharpe first met Sonny Crockett and Ricardo Tubbs, both of which agreed to remain in the eighties and gather chicks for Sharpe's growing sex pile.

In order to generate revenue for Lesbodia, Sharpe leases out his women to the highest bidders - his former clients have included Bill Gates, Richard Branson and the Queen of England (who he later bought out and added to his collection). Sharpe also serves as the Secretary-General of the United Nations, on which Lesbodia is considered a permanent member of the U.N. Security Council.

This incident occurred on October 8th, 2020 when the Lesbodia NFL team the Lesbodia Raiders of the Lost Arks were indicted in multiple felony counts of not sharing their lesbians with Sharpe. Sharpe used them as an example to others and forced them to watch The Adventures of Pluto Nash until I get my goddamn danish.

Sharpe's crisis and the "Lesbusters"[edit]

In 2008, Sharpe was facing a minor crisis. Having harvested the entire planet of its lesbians and loose women, Sharpe's collection was beginning to lose ground. To make matters worse, Jack O'Neill's Lesbian Acquisition Teams (LAT) had been turning up blanks. As a result, Sharpe had to look beyond the corporeal world, and so he turned to Derek Acorah and instructed him to use his magical powers to find lesbians of the ghost variety. In order to acquire the ghost lesbians, the Ghostbusters were called in as hired mercenaries, and thanks to the efforts of Dr. Peter Venkman and his motley men, Sharpe found the new source he had been looking for. In light of his achievements, Derek Acorah was promoted by Sharpe to serve as one of his High Prophets, a position also held by Noel Edmonds -- who had been bestowed with the title a year previous for his work on Deal or No Deal: Lesbian Edition -- which was later released in DVD game format.

At the beginning of the 21st century, mankind faced its most unprecedented threat - the Emo. Prior to the assistance of the legendary Sharpe, the armies of the world faced numerous losses due to the secret weapon of the emo - music. Pumped to a thousand decibels, the shrieks of My Chemical Romance could cause hemorrhaging on a cellular level. In 2007, the United Nations called upon the aid of Sharpe, who informed his new allies that the only aural defense against emo music was the sound of a live female orgasm.

War has changed. Mobile infirmaries - mounted on treads the size of two-story houses - patrol the cratered battlefield (Mobile Orgasm Infirmary Units). Inside, droves of women stand at the ready with vibrators in hand. The hopes and moans of such women marched forward with the troops on the frontlines. The soldiers do not fear shelling or bullets, in fact they would welcome it - a form of heaven compared to the emo's music. The first sounds of the insidious emo music are heard, entire regiments collapse to the ground as blood fountains from their ears and nose. "Deploy the women!" a shrill voice cries out. The giant metal coffin's drop gate crashes down. The women - glistening with sweat - flood out like water. They rush to the writhing grunts. The "zip-zip-zip" of thousands of cords is heard as they disrobe, revealing a web of pink calves.

Meanwhile, more soldiers fall to the ground as emo kids stagger almost inhumanly over their fallen corpses. The sounds of hardcore emo rock bellows throughout the area. The emos go on a twisted harvest, scoping out the weakest soldiers for slave labour of a mostly homosexual nature. A few captives will be put to work in the sweatshops, hemming away at impossibly tiny jeans for the wealthy emos. They will see their compatriots slathered in human waste upon returning to the concentration camp. All features of their faces sunken in, they will thank God for his mercy. Sharpe, despite being a steadfast warrior and brilliant strategist, loses many battles - though this is in due part to the fact that he was too busy surveying the women of the Mobile Orgasm Infirmary Units.

However, in a twist rivalling that of Metal Gear Solid 2, it was revealed that Sharpe was funding the emos all along, supplying them with their technology. The sound waves used to scramble brain waves are actually tape recordings of Sharpe's flatulence, dubbed over with wuss rock. He has pitted man against his brother so that he may inherit the women of Earth - a plan that gained fruition and success.

Following the victory in the Emo-Human Conflict in early 2007, Sharpe was personally impressed by the overwhelming successes achieved by the Mobile Orgasm Infantry Units. However, upon further research into the many facets of the female reproductive system, Sharpe discovered a terrifying, yet ultimately fruitful discovery - VCDI. Throughout history, men and shemale have been plagued by the mysterious event of phallus loss, an event where, during rampant fucking, the penis becomes consumed by the vagina and ultimately lost to the depths of the female interior. In 2007, Sharpe and his scientists made a breakthrough discovery, the reason behind the penis disasters that befell the male populace.

Sharpe revealed that the vagina itself possesses its own gravitational field, similar to that of a quantum singularity. Once the penis passes the event horizon of the vagina, it is immediately subjected to the crushing torrents of the surrounding atmosphere. Sharpe recorded this phenomenon in all of the lesbians in his sex pile, and compiled the data into a system known as VCDI - the Vaginal Crush Depth Index. The higher the index number, the greater the gravitational stresses encountered by the penis. The average VCDI for a white woman in her mid-twenties is between 2 and 7, with the VCDI gradually decreasing as age advances. Negroid women of any age are said to possess a VCDI of over 20, which also resolves the mystery of black males having larger penises, for only a strong phallus could hope of surviving the fierce might of a +20 VCDI vagina.

Knowing this about VCDI, Sharpe immediately looked to Bale and the possible military applications of women with high VCDI, and large quantities of grease with which to squeeze out projectiles with tremendous force and unerring accuracy. Initially, Sharpe faced opposition from Bale, who as the Minister of Defense for Lesbodia, was the ONLY defense of the island nation. Bale believed that should the creation of these VCDI-based organic weapons went ahead, he would lose face. After many hours of negotiating and fucking of lesbians, a compromise was reached. Sharpe granted Bale personal command of an elite unit of greased up women with a VCDI of over 15.

Sharpe has fathered, through his famed lesbian pile, every single major British hero, from Boudicca and King Arthur to Richard I and Winston Churchill, which Sharpe later denied citing the lack of hair. Contrary to popular belief, George Washington is also one- he was given a secret mission by his Father via a dream in order to make a country that'll distract the world from any cockups by Sharpe's beloved Britain. It is an ongoing mission that is nearing success.